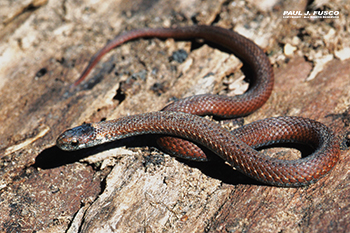 Background and Range: The secretive northern redbelly snake, which is not often observed, is widely distributed in upland regions of Connecticut. The population is considered secure in the state. Reforestation of southern New England, including Connecticut, during the twentieth century has benefited this woodland species. Forestry practices which create small clearings, with an abundance of logs, bark, and slash, may provide enhanced basking and feeding opportunities in otherwise heavily wooded areas of the state.

This snake also is widely distributed over the eastern United States and southern Canada, from Nova Scotia to northern Florida, westward to southern Manitoba and extreme eastern Saskatchewan, northeastern North Dakota, and the extreme eastern portion of South Dakota, Kansas, Oklahoma, and Texas.

Description: The redbelly snake is small, measuring between 8-11 inches in length. The chestnut brown or slate gray body is distinctly marked with a bright red or orange belly and three well-defined light-colored spots behind the head. The dorsal (back) scales are keeled (raised ridge in the center of each scale, giving a rough appearance). Juveniles resemble adults, except that the spots around the neck tend to resemble a ring (often causing confusion with the northern ring-necked snake).

Life History: Northern redbelly snakes are typically active in May through October. Mating occurs in spring and early summer, and the females give live birth to an average of 7-8 young sometime between late July and early September.

Interesting Facts: This snake spends most its life hidden under boards, rotting logs, rocks, bark, brush piles, and leaves. It usually stays under cover during the daylight hours, emerging in the evening and remaining active throughout the night. Winters are spent in anthills and unused rodent burrows.

A wide variety of predators feeds on this snake, which also experiences mortality by lawn mowers and vehicles.

The northern redbelly snake is sometimes confused with the northern brownsnake, northern ring-necked snake, and eastern wormsnake. All are nonvenomous species.

When redbelly snakes are handled, they will not try to bite, but they may emit musk from glands at the base of the tail and some may curl the upper “lip” outward, showing off tiny teeth.

Take the time to learn about, understand, and respect this vitally important reptile, and share your knowledge with others. If you encounter a northern redbelly snake, observe it from a distance and allow it to go on its way. All snakes will retreat from humans if given a chance.

Even though redbelly snakes are mild-tempered, you should try not to disturb snakes by getting too close or handling them. The redbelly snake's only defense is the release of musk from special glands when disturbed.

The killing of this snake is strongly discouraged. Additionally, wild snakes should NEVER be collected as a pet. If you encounter a snake problem, assistance and more information about snakes can be found by visiting the Snakes in Connecticut webpage or calling the DEEP Wildlife Division at 860-424-3011.