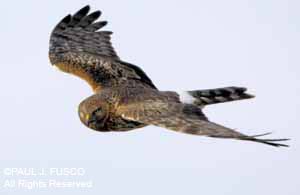 Background: There is very little historical documentation of northern harriers in Connecticut. The species was considered common in the 1800s. Little additional information is available about population changes in the state through the early 1900s. A dozen or so pairs have been observed in Connecticut during the breeding season in recent years, but only one successful nesting pair has been confirmed by the DEEP Wildlife Division. Northern harriers are found in Connecticut during winter, and observations have been reported up until March or April.

Northern harrier populations declined throughout their North American range in the 20th century due to the loss and degradation of marshlands and changes in farming practices. In addition, past use of the pesticide DDT added to the reduction in the harrier's population. The population is currently either stable or slightly declining throughout most of its range. The habitat requirements of the northern harrier are a limiting factor in the Northeast because of the loss of open habitat through the destruction of wetlands and the reforestation of agricultural lands. The northern harrier is an endangered species on Connecticut's List of Endangered, Threatened, and Special Concern Species because it occurs in such small numbers in the state. It is also protected by the federal Migratory Bird Treat Act of 1918.

Range: The northern harrier occurs throughout the United States, Canada, and north to Alaska. It is also found in Europe and Asia. The species spends the winter in parts of its nesting range, but is more commonly found wintering south through Mexico, Central America, northwestern South America, and the West Indies.

Description: The slender-bodied northern harrier has a long tail and wings, yellow legs, owl-like facial discs, a conspicuous white rump patch, and yellow eyes. Adult males have blue-gray upperparts and white underparts. The females are brown above and buffy below, with brown streaking down the sides of the chest and flanks. Juvenile harriers of both sexes have dark brown backs with rusty overtones and cinnamon underparts, with no streaking. The northern harrier is a medium-sized raptor. The female is typically larger than the male.

Life History: Northern harriers usually return to the same area to nest. They nest on the ground in well-concealed locations, often near low shrubs or in tall clumps of vegetation. Nesting locations are usually in abandoned fields, wet meadows, and coastal and inland marshes. The species is not monogamous; a male may have two or more mates, but usually only one female is able to successfully produce young because the male typically favors one mate and her nestlings with food.

The 4 to 9 (commonly 5) eggs are laid from March through July. The eggs are pale blue when first laid but then turn to dull white. They are usually unmarked, although some may be spotted with brown. Incubation, which is done by the female, begins with the second to fourth egg and lasts for 31 to 32 days. The young are brooded by the female, with the male bringing food and passing it to the female in mid-air. Young harriers can fly about 30 to 35 days after hatching.

The eggs and young are vulnerable to predation by mammals, human disturbance, and destruction due to agricultural activities (mowing and plowing).

In years when prey is abundant, harriers are more likely to raise young to the fledgling stage. Unless prey is unusually abundant, the birds do not breed until they are 2 years old.

Interesting Facts: The northern harrier has a remarkable sense of hearing. Like owls, it has a curved, sound-reflecting facial ruff which, when combined with characteristic low flight, enables the bird to locate prey by sound.

The species is often called the marsh hawk because it inhabits open marshlands and wet meadows. It got the name “harrier” due to its habit of raiding or harrying its prey.

A female, after receiving prey in flight from the male, will not return directly to the nest but will make several false landings to confuse predators.

Female harriers will repeatedly attack other hawks that soar over the nesting territory; they will even drive away crows and eagles. Humans that approach too close to a nest are often dived at by the protective female.

How You Can Help: The recovery of the northern harrier in Connecticut depends on the conservation and protection of large areas of inland and coastal marshes, wet meadows, upland heaths, and grasslands through land acquisition or landowner agreements. Supporting measures to protect and enhance wintering habitats in Central and South America is also important.

The nesting activities of the northern harrier are often difficult to survey and monitor. Therefore, any confirmed nests should be reported to the Wildlife Division at deep.wildlife@ct.gov or 860-424-3011 to help increase our knowledge of the activities of these birds in Connecticut.

The production of this Endangered and Threatened Species Fact Sheet Series was made possible by donations to the Connecticut Endangered Species/Wildlife Income Tax Checkoff Fund. (rev. 11/08)