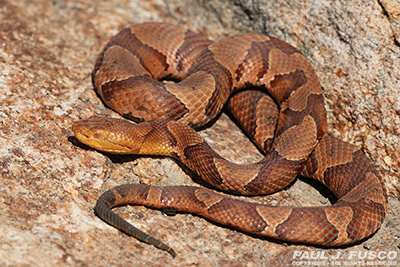 Background: The copperhead is one of two venomous snake species found in Connecticut; the other is the state-endangered timber rattlesnake. Cryptic coloration, a secretive nature, and nocturnal habits help copperheads avoid detection, enabling them to survive in close proximity to humans. This is in contrast to the timber rattlesnake, which has experienced a tremendous population decline due to historical bounty hunting, unnecessary killing, and loss of habitat.

Connecticut's copperhead population is more stable than the timber rattlesnake's, but it still has been declining due to habitat loss, disturbance, and human persecution. Quarrying and recreational use of trap rock systems have depleted copperhead habitat. Development threatens the lowlands and meadow edges that are used by the snakes and other wildlife. Countless copperheads and other snakes are killed as they cross roads during the breeding season or while travelling to and from den sites. Intentional killing due to fear and misunderstanding also reduces population densities and abundance.

Range: Copperheads are widely distributed over the eastern United States except Florida. The northern copperhead ranges from Massachusetts southward through the Appalachian Mountains and Piedmont to Georgia, and westward through northern Alabama and extreme northeastern Mississippi. From southern New York, copperheads range west through central Pennsylvania and the southern portions of Ohio, Indiana, and Illinois.

Description: This beautiful, two-toned, copper-colored snake has distinctive hourglass patterns running down its dorsum (back). Its stocky body has brown or reddish bands that are wide on the sides and narrow on the back. The belly is pink with darker marks, and the scales are keeled (raised ridge in each scale). The coppery eyes have vertical pupils. A triangular, or spade-shaped head, which is wider than the neck, is a distinctive characteristic of venomous snakes. Another distinctive characteristic is a “pit” on each side of the head between the eyes and nostril. Copperheads generally measure about 24-37 inches in length. Young copperheads can be identified by a bright yellow tail tip.

Habitat and Diet: In Connecticut, copperheads favor hilly, relatively low-lying areas. They are predominantly found along wooded, basalt ridges, talus slopes, and rocky hillsides, or at the edges of meadows. The meadows are usually bordered by marshes, streams, or swamps. Dens are typically located near edges of these wetlands in dense, damp forested habitat.

Copperheads will lie motionless in leaf litter or under debris while waiting for their prey. They consume mainly mice and small rodents, but will also eat other reptiles, amphibians, small birds, and insects.

Life History: Copperheads are active from April through October, spending the rest of the year in dens. These dens are often shared with other snakes. Shortly after emerging from dens, copperheads will seek mates. This snake reaches sexual maturity at about 4 years of age. It is ovoviviparous, which means eggs remain internally in the female until they hatch; the young are then born live. Clutches can range anywhere from 3 to 10 young, but typically average 4 to 6. After birth, the young are not cared for by the adults and must fend for themselves.

Interesting Facts: Copperheads and rattlesnakes are pit vipers. They have a cavity on each side of the head located between the nostril and the eye that contains a pit organ. The pit organs enable the snakes to seek out and strike accurately at objects warmer than their surroundings; this adaptation helps pit vipers prey on nocturnal mammals. Pit vipers also have large, hollow fangs at the front of their mouth that are connected to the bones of the upper jaw and palate so that they are folded against the roof of the mouth when the mouth is closed and are automatically brought forward when the mouth is opened. These fangs inject venom into prey. Copperhead venom is hemolytic, meaning it causes the breakdown of red blood cells in the bitten animal and this eventually subdues the animal, allowing the snake to easily swallow it.

Snakes have an acute sense of smell. They use their tongues to “smell” and find food. The Jacobson’s organ, located in the roof of the mouth, enables snakes to identify prey as well as other snakes and animals that may want to prey on them. Snakes do not have external ears, but they can detect vibrations to help locate prey.

The eastern milksnake, northern watersnake, and eastern hog-nosed snake are often confused with the copperhead and needlessly killed. All of these snake species should never be killed; they should be observed from a distance and left alone.

Take the time to learn about, understand, and respect this vitally important reptile, and share your knowledge with others. If you encounter a northern copperhead, observe it from a distance and allow it to go on its way. All snakes will retreat from humans if given a chance.

Even though the venomous copperhead has the potential to inflict harm, it is docile and nonaggressive, choosing to remain still and hidden rather than give away its position. This snake will take a defensive posture only when directly threatened. It may rapidly vibrate its tail like a rattlesnake, even though it has no rattles. If provoked or handled, a copperhead may strike and bite. The bite, while painful and capable of producing severe illness, rarely results in the death of a human. However, seek medical attention immediately if bitten. Hikers and climbers in trap rock areas (a favored habitat of copperheads) should be careful of where they place their hands and feet.

The killing of this snake is strongly discouraged. Additionally, wild snakes should NEVER be collected as pets. If you encounter a snake problem, assistance and more information about snakes can be found by visiting the Snakes in Connecticut webpage or calling the DEEP Wildlife Division at 860-424-3011.