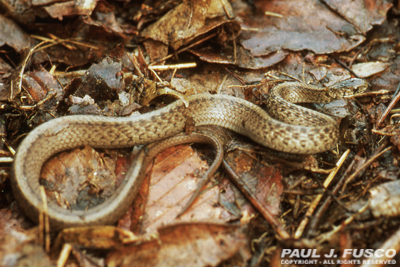 Background and Range: The northern brownsnake is found throughout Connecticut, and its population is currently considered secure in the state. This common but secretive snake flourishes in developed and urban areas. It was previously known as Dekay's brown snake.

The species is widely distributed over most of the northeastern United States and adjacent Canada, from southwestern Maine through Pennsylvania south to North Carolina.

Description: This small snake usually reaches an adult length of 9 to 15 inches. It has keeled scales (raised ridge along the center of each scale), and a dorsum (back) that ranges from dark brown or light tan in coloration. Two rows of darker spots run along the length of the back, often with a lighter band running between the darker rows. Irregular banding or weakly diamond-shaped patterns can also be found on the back. The belly is gray to pink and can have small black spots along the edges. A black mark is behind each eye and on the neck. Young northern brownsnakes can be identified by their white neck-ring, lack of spots, and darker body.

Habitat and Diet: Northern brownsnakes are found in a variety of habitats, such as wetlands, grasslands, and forests, but they are most commonly encountered in disturbed or residential areas. Populations are most abundant in more developed portions of the state, even in vacant lots in some of Connecticut's largest cities. In forested areas of the state, these snakes are more localized, and often restricted to small patches of disturbance, such as along roadways, railroad tracks, or edges of fields.

This snake feeds during all hours of the day on insects, earthworms, slugs, snails, fish, and small amphibians (rarely).

Life History: In southern New England, northern brownsnakes are active from March through November. Once they emerge from their winter dens in spring, they immediately begin to look for a mate. The mating season in New England extends from March to May. Beginning in mid-July through August, females give birth to live young (viviparous) after a 105 to 113-day gestation period. Litter sizes range from 3 to 31 young snakes, which measure about 3.5 inches. The young tend to stay near the female shortly after birth, but she does not take care of them, and they must fend for themselves.

Interesting Facts: Northern brownsnakes are somewhat tolerant of colder temperatures. They spend the winter in dens, such as rodent burrows, rock crevices, or under buildings, that are below the frost line. These winter dens are often communally shared with other brownsnakes and also with other snake species, like gartersnakes, northern redbelly snakes, and smooth greensnakes.

Northern brown snakes are often confused with northern redbelly snakes, which can be slightly smaller and have a brown or gray body with a bright red or orange belly and keeled scales (raised ridge in the center of each scale). Redbelly snakes are more widespread in forested areas, whereas brownsnakes are usually found in disturbed habitats.

Take the time to learn about, understand, and respect this vitally important reptile, and share your knowledge with others. If you encounter a northern brownsnake, observe it from a distance, and allow it to go on its way. All snakes will retreat from humans if given a chance.

Even though a brownsnake may not bite, you should try not to disturb it by getting too close or handling it. Its only defense is the release of musk from special glands when disturbed. Brownsnakes, or any other wild snake, should NEVER be collected as a pet, and the killing of snakes is strongly discouraged.

If you encounter a snake problem, assistance and more information about snakes can be found by visiting the Snakes in Connecticut webpage or calling the DEEP Wildlife Division at 860-424-3011.