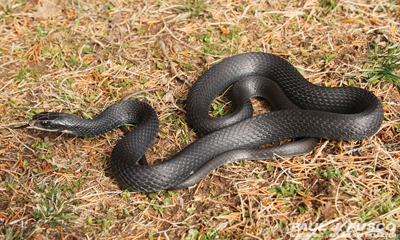 Background and Range: The northern black racer is one of two large, black snakes found in Connecticut (the other is the eastern ratsnake). It is considered an "important species" in the state as its population is declining due to loss of habitat through succession, fragmentation, and development.

Several subspecies of black racers are found throughout the 48 contiguous states, Canada, and Mexico. The northern black racer ranges from southern Maine, west to Ohio, and south to Georgia, Alabama, and parts of Tennessee. In Connecticut, the species is found statewide but is rare in the extreme northwestern corner.

Description: This fairly large snake can measure in length from 33 to 65 inches. It has a solid black, cylindrical body with a bluish belly and white chin. The scales are smooth, giving the snake a “matte” appearance. The head, which is not much wider than the body, is small for this larger-sized snake. The eyes are large, with circular, dark brown-amber pupils, and prominent brow ridges. Young black racers do not resemble adults in pigmentation. Instead, they have a row of dark brown blotches on a light gray-brown body, and the venter (belly) has several rows of spots. The juvenile pattern is gradually replaced by the uniform adult coloration as a snake enters adulthood. Adult males are told from females by a longer tail and distinct bulge in front of the vent.

The similar-looking eastern rat snake has lightly keeled (raised ridge along the center) scales, a belly that is white with black checkerboard patterns, and a more squared-shaped body. The ratsnake usually measures between 46 and 68 inches in length.

Habitat and Diet: The black racer prefers open, lightly wooded habitats. These include meadows, fields, powerline rights-of-way, roadsides, and transitional zones between forests and fields. This snake thrives in areas that are mowed or occasionally cleared, and will avoid heavily forested habitats. Winter den sites are usually in old burrows or rocky areas with deep fissure cracks.

An active daytime hunter, the black racer will search for prey over an extensive home range. Its prey consists of smaller individuals of other snake species, toads, frogs, small birds, chipmunks, mice, shrews, other small rodents, and invertebrates such as butterfly and moth larvae, various other insects, and spiders. Juvenile black racers tend to eat more invertebrates. Although this snake's scientific name implies it, the northern black racer does not constrict its food. Instead, the snake pins prey with its body and swallows it whole.

Life History: In colder environments, snakes will brumate during winter. Unlike hibernation when animals are asleep, brumating animals are awake but inactive. Black racers will migrate to their winter dens by late October, often using the same dens year after year and sometimes sharing them with other black racers or other snake species. Black racers usually emerge from their dens by late March and begin breeding shortly after. It is at this time that they become more territorial and defensive. A clutch of 3 to 32 eggs will be laid in June-July, hatching in August-September. The eggs are distinct by having a rather granular texture. Egg clutches are hidden under logs or in burrows, or in a nest cavity in leaf litter or sand. This species has been known to deposit eggs communally. Maturation occurs in 1 to 2 years for males and 2 to 3 years in females. The lifespan of black racers in the wild can be up to 10 years.

Interesting Facts: Although the black racer is swift, its top speed is about 8 to 10 miles per hour, about the same as a quick jog.

Racers are beneficial to humans by controlling rodents, especially when they occur in or near agricultural fields.

Racers are preyed upon by other vertebrates. They are often killed by vehicles and during mowing operations. Although less frequently mistaken for venomous snake species because they lack a blotched or banded pattern, some individuals are still killed unnecessarily by people.

If cornered or agitated, this non-venomous snake may lash out in defense and bite, expel musk, or discharge feces.

Conservation: Old pastures, fields, and other habitats used by black racers also support other wildlife. If these areas are allowed to regrow into dense forest, black racers and other species could possibly be extirpated from that area. Habitat fragmentation and increased urbanization also have negatively affected black racer populations.

Take the time to learn about, understand, and respect this vitally important reptile, and share your knowledge with others. Understanding that the black racer is non-venomous is important. No Connecticut venomous snake has an all black back. Although black racers are sometimes aggressive, no snake will deliberately attack a human. If startled or cornered, it may strike in self defense. If you encounter a northern black racer, observe it from a distance and allow it to go on its way. All snakes will retreat from humans if given a chance.

Black racers, or any other wild snake, should NEVER be collected as a pet. This snake does not do well in captivity, often succumbing to infection, parasites, and stress. The removal of even one individual can negatively affect the population.

The killing of any snakes is strongly discouraged. If you encounter a snake problem, assistance and more information about snakes can be found by visiting the Snakes in Connecticut webpage or calling the DEEP Wildlife Division at 860-424-3011.