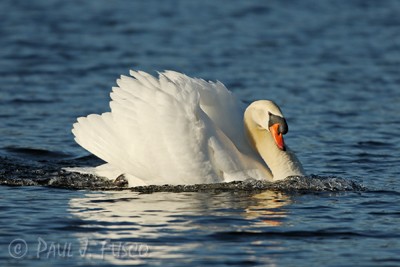 Background and Range: The mute swan – one of the largest and most conspicuous of Connecticut’s birds – is an exotic species that originated in Europe and Asia. The Atlantic Flyway population is thought to be the result of several hundred swans transplanted to the lower Hudson River Valley and Long Island between 1910 to 1912. Feral mute swans were reported in Connecticut by the 1930s, but establishment of breeding birds did not begin until the late 1950s. The annual midwinter waterfowl survey recorded 143 mute swans in Connecticut by 1963. Recent breeding population estimates indicate that there are between 1,000 and 1,400 mute swans breeding in the state at both inland and coastal locations.

Swans elicit diverse reactions from the public. Their tameness, acceptance of food handouts, and appearance make them appealing to a segment of the public that enjoys viewing animals in park-like surroundings. In contrast, biologists, conservation organizations, sportsmen, and most birdwatchers have expressed concern about the negative impacts of these large, aggressive birds on native waterfowl, other birds, and aquatic habitats. Swans also can be a nuisance to boaters and fishermen when defending nest territories or when large groups of swans congregate on beaches, intimidating beach visitors and fouling the area with their droppings.

Description: This large, all-white swan is recognized by an orange bill which is black at the base. A prominent black knob is at the base of the bill. Another distinctive characteristic is a curved neck held in an S-shape, with the bill pointed downward while the bird is swimming. Individuals weigh an average of 25 pounds and have a wingspan of 7 to 8 feet. Male (cob) and female (pen) mute swans are essentially identical in appearance, except that the male is usually larger and has a more prominent knob on the forehead. Young swans, called cygnets, are usually white, but gray-colored cygnets are not uncommon.

Habitat and Diet: Mute swans are associated with both tidal and freshwater wetlands. They can be found in ponds, slow rivers, coastal bays, and inland lakes.

Mostly herbivorous, swans have a voracious appetite for submerged aquatic vegetation. The large quantities of aquatic vegetation that are consumed by mute swans often result in overgrazing and the destruction of habitat, ultimately having negative effects on aquatic habitats and the native species associated with such ecosystems. Occasionally, swans will feed on insects and other invertebrates. 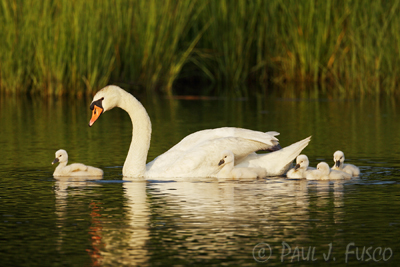 Life History: Most mute swans breed at 3 years of age and remain with the same mate for life. Courtship displays begin in late February and each pair vigorously defends a territory (four to 10 acres in size) from other swans. The nest, constructed in late March or early April, is typically a large (approximately 4 feet across) somewhat circular pile of aquatic plants built on an island or in clumps of cattails or grasses along the edge of the water. An average of 5 to 7 eggs are incubated by the pen for 36 to 38 days. Usually one nesting attempt is made, but swans will readily re-nest if the original clutch is lost to flooding or predation. The cob becomes more aggressive when defending the incubating pen or young cygnets and will chase and even attack other nearby wildlife and people. Most cygnets fledge by early fall but will remain with the adults until late fall. Survival after fledging is high and 50% of the young can be expected to survive about 7 years. Mute swans are long-lived (20 to 30 years) and can breed every year after 3 years of age. However, the reproductive rate drops considerably after age 20.

Mute swans are basically non-migratory. In Connecticut, breeding pairs will remain in inland waters into winter if open water remains and there are adequate food sources. After freeze-up (usually early or mid-December), most swans are forced into coastal areas or major river flowages where open water is available.

Management of Problems: Mute swans can cause a variety of problems, including aggressive behavior towards people, destruction of submerged aquatic vegetation, displacement of native wildlife species, and degradation of water quality. Many biologists and conservationists also consider the mute swan to be an ecologically damaging exotic species. 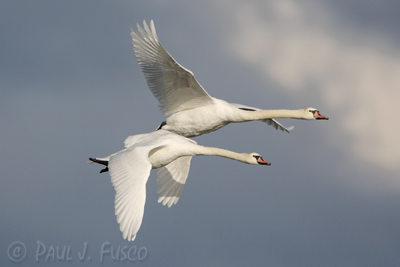 During the nesting and brood rearing periods, must swans are very territorial. Both males and females are aggressive toward people and other waterfowl within their nesting area. Sometimes their behavior is so aggressive that they will drive other waterfowl out of areas where the swans are nesting. Reports of swan attacks on people, especially small children and users of personal watercraft (kayaks, jet skis, canoes, etc.), are common. Because of this, people need to exercise caution when using waters occupied by swans during the nesting and brood-rearing periods.

The ability of mute swans to consume up to 8 pounds (wet weight) of submerged aquatic vegetation per day, coupled with another approximately 20 pounds of vegetation uprooted during feeding can have devastating effects on plant beds. Submerged aquatic vegetation communities are key components of aquatic ecosystems that provide habitat and shelter for a myriad of fish, shellfish, and macro-invertebrates. Loss of these communities adversely affects aquatic habitats and the native species associated with such ecosystems. In addition, the reduction of aquatic vegetation in ponds or coastal areas where large flocks of mute swans concentrate may negatively impact migrant and wintering waterfowl and shorebirds by reducing overall food availability.

Because the mute swan is an exotic species, it is not protected under the federal Migratory Bird Treaty Act of 1916, making it possible for states throughout this bird's North American range to actively manage populations. States and Canadian Provinces with sizable mute swan populations are conducting control programs to reduce the number of mute swans to a level that is compatible with balancing the ecological integrity of natural ecosystems. Public opinion in Connecticut, as measured through an independently conducted survey in the late 1990s, is in favor of swan control to protect our state's natural ecosystems.