Background: The muskrat is a semi-aquatic rodent that lives along waterways in Connecticut. Native Americans and early settlers used muskrats as a source of food and fur but had little influence on population levels.

Historically, muskrats have been one of the most commonly trapped animals in Connecticut and throughout the nation. They are considered an important furbearer resource in terms of the number harvested and economic value. In Connecticut, the muskrat harvest has dropped markedly from over 20,000 per year more than 2 decades ago to between 2,000 to 4,000 per year in recent years. Connecticut has a legal trapping season and trappers are required to pass a trapping course offered by the DEEP's Conservation Education/Firearms Safety Program.

Range: The muskrat is found throughout the United States, except in predominantly dry regions. It is common in New England and throughout Connecticut.

Description: The muskrat gets its name from its resemblance to a rat and from the musky odor that is produced by scent glands. With brown fur and partially webbed hind feet, the muskrat can look like a beaver. However, it has a long (8-11 inches) rat-like tail that is scaled, nearly hairless, and somewhat flattened on the sides. Muskrats are much smaller than beavers, measuring 18-25 inches long (including the tail) and weighing between 2-4 pounds. The head is broad and blunt with short ears barely visible above the fur. The muskrat’s coat is practically waterproof and is soft, dense, and grayish brown in color. The underfur is covered by long, brown guard hairs which serve to protect the soft underhair from wear. The muskrat is further adapted for its semi-aquatic life with lips that act as valves, closing behind the front incisors so it can actually gnaw underwater.

Life History: Muskrats have a high reproductive rate, producing up to 3 litters per year, each with 6 to 7 young. They are polygamous and breeding takes place from late March through July. After a gestation period of 28 to 30 days, the young are born blind, helpless, and almost naked. The young are dependent on the female for about 30 days. They leave the den at about 6 weeks of age. 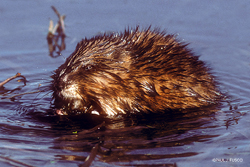 Interesting Facts: Muskrats live in or near water most of their lives. They make their homes in bank dens or lodges similar to those of the beaver but smaller in size. Muskrats excavate dens by burrowing into the banks of slow-moving streams with their sharp front claws. The dens are complete with dry chambers and underwater tunnels, and there are ventilation holes which are hidden at the surface by shrubs, branches, and thick vegetation. The lodges, constructed with aquatic plants, brush, and mud, are usually situated on a foundation of brush or a stump or are occasionally built up from the bottom of the wetland. Several small feeding huts that are similar to, but less complex than the lodges, may be constructed within the muskrat’s territory. Here, the animal will periodically feed while protected from predators and harsh weather.

Muskrats are active throughout the year and, although mainly nocturnal, are sometimes seen during the day. They are susceptible to cold and wind and spend more time in their dens during winter. Muskrats are highly territorial and aggressive toward each other, although several may share a lodge during winter. The muskrat’s normal home range is usually within 200 yards of its den, although it may travel several miles over land in search of suitable habitat.

Muskrats generally live about 1 year in the wild, occasionally up to 4 years. In good habitat and with little competition, muskrats are prolific. However, populations appear to be cyclical in nature and influenced by the availability of food. High populations of muskrats can greatly reduce aquatic vegetation, making the habitat less suitable for muskrats and other wildlife species.

Muskrats can remain underwater for as long as 20 minutes. With their webbed hind feet acting as paddles and their tail as a rudder, they swim at a speed of up to 3 miles per hour and can even swim backwards. Muskrats also can give a warning slap with the tail, similar to the beaver.

Management of Nuisances: Sometimes muskrats are considered a nuisance if they damage a garden or crops by their feeding activities or if they burrow into dams and dikes. Planting a garden or crops beyond the animal’s normal 200-yard home range or enclosing the garden and/or field with fencing can effectively solve some problems.

Most often, muskrat damage is associated with burrowing and digging activities that can weaken dikes and dams. The following suggestions can help reduce muskrat damage to existing dikes/dams or can be applied during construction as a preventive measure:

This publication is partially funded by the Federal Aid in Wildlife Restoration Program. Funds are provided through an excise tax on the sale of sporting firearms, ammunition, and archery equipment. (rev.8/09)