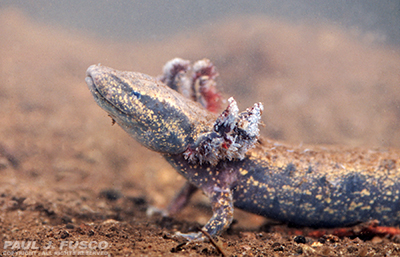 In 2015, the mudpuppy was listed as a state species of special concern under Connecticut's Endangered Species Act. As a state-listed species, the mudpuppy cannot be collected or removed from the wild and must be immediately released back into the water if caught while fishing.

Range: The native range of the mudpuppy is believed to include sporadic populations from the southeastern United States, north to New York, Vermont, and Quebec, and west to North Dakota.

Description: The mudpuppy is the largest and only fully aquatic salamander found in Connecticut. It measures between 8 and 17 inches in length and resembles a large larval salamander at maturity, as it never loses its external gills. The mudpuppy is recognized by red to maroon-colored bushy gills; a gray-green and mottled back with blue-black spots and a gray belly; a broad flattened head and squarish snout; tiny eyes; a fin-like tail; and four toes on each foot. Larvae have a dark mid-back stripe bordered by a yellow band on each side. Larval coloration is maintained for up to 3 years.

Habitat and Diet: The mudpuppy occurs in a wide range of water conditions, including rivers and drainage ditches. In Connecticut, it is mainly found in deeper waters of the Connecticut and Housatonic Rivers and associated drainages.

Mudpuppies feed on fish and their eggs, crayfish, aquatic insects and larvae, mollusks, snails, worms, spiders, plant material, and an occasional salamander. They are eaten by fish, turtles, herons, and water snakes.

Life History: Male mudpuppies seek out and mate with females in fall. By the following spring/summer, approximately 50 to over 100 eggs are deposited singly by the female under large logs or rocks. The actual dates of egg laying and development are dependent on water temperature. Development periods have ranged from 1 to 2 months. Females often remain with the eggs until they hatch. Larvae remain in the vicinity of the nest site for 6 to 8 weeks.

Interesting Facts: Mudpuppies attain sexual maturity in their sixth year at a length of 8 inches. They have been known to live up to 30 years in captivity. In the wild, an average life span of 11 years is more common.

Though primarily nocturnal, mudpuppies will come out during the day in dark or murky bodies of water. They are well camouflaged and walk along the bottom of the waterbody, but can swim in quick, short bursts. They are active throughout winter in deep water and are sometimes caught by ice fishermen.

The mudpuppy gets its name from a grunting sound it can make, which resembles the bark of a dog. Though it has lungs, the mudpuppy breathes primarily through its gills and uses its lungs to adjust its buoyancy.

If you happen to catch a mudpuppy while fishing, release it immediately back into the surrounding water system. Do not release it somewhere else.

Work within your community to help keep Connecticut's water resources free of siltation and pollution.