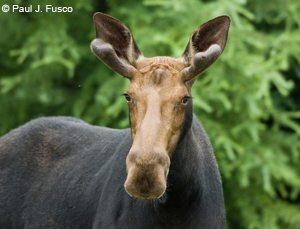 View a current map of moose sightings in Connecticut

Background
Historically, it is unclear if moose were ever native to Connecticut. There are no records of archaeological deposits of moose and no mention of the animal from "ethno-historic accounts." If moose were native, they likely existed in low numbers.

The Connecticut Board of Fisheries and Game (the precursor agency to the DEEP Wildlife Division) received sporadic reports of moose observations in the early 1900s and throughout the 1930s. However, a photograph taken by a resident of Ashford in September 1956 was considered the first official photograph that recorded the presence of moose in Connecticut. In more recent times, the Wildlife Division received a report of a moose sighting in 1984, followed by sporadic sightings up through the early 1990s. Between 1992 and 1999, moose sightings increased to an average of 6 per year, mostly in the northern portion of the state during spring and fall. The first moose-vehicle accident occurred in 1995.

Range
Four distinct subspecies of moose are recognized in North America. The eastern moose (Alces a. americana) is the subspecies that has expanded into Connecticut. Eastern moose are found in the northeastern United States, eastern Canada, including Newfoundland, and westward to the Great Lakes.

Description
Moose are very large animals with long, slender, grayish-white legs. They may stand over 6 feet tall at the shoulders and can weigh up to 1,400 pounds. Females (cows) are smaller than males (bulls). On average, cows weigh 750 pounds while bulls weigh 1,000 pounds. Both cows and bulls have variable coat colors ranging from tan to blackish-brown, depending on their age and the season (an annual molt occurs in spring). Males have a black face while the female’s face is brown. Both have a skin flap or “bell” underneath their throat, with the bull’s noticeably larger than that of the cow's.

Adult males have impressive antlers which are shed annually. The antlers begin to grow in early spring and are fully developed by late summer. Males scrape the velvet off the antlers by rubbing against trees and shrubs. These palmately-branched antlers can weigh close to 60 pounds and spread to more than 5 feet across. Male calves sometimes develop “button” antlers and yearlings usually develop “spikes.”

Habitat and Diet
Moose live in forests. They eat buds, twigs, and leaves from a variety of shrubs and trees, including birch, maple, and cherry. In spring and summer, moose may be found foraging for aquatic plants in wetlands.

Life History
The moose’s breeding or “rutting” season begins in September. At this time, a bull’s neck swells and the bull feeds very little, often losing a considerable amount of weight. Both bulls and cows travel in search of a mate. Bulls can breed as yearlings but older bulls usually dominate breeding activities; cows breed at 1.5 years old. During the rut, sparring matches may occur between bulls as they defend their right to mate with a cow. These matches can be aggressive encounters, often resulting in injury and, sometimes, death. Bull moose make rut pits for use during courtship. The pits are dug with the front hoofs and then urinated into. Receptive cows often step into the pit and vocalize to the bull moose. Moose vocalizations include grunts, moans, and whines.

In late May or June, following a gestation period of about 8 months, cows give birth to a 20- to 25-pound calf. Twins are not uncommon. Although helpless at birth, calves become more agile after a few days. Calves grow rapidly and will remain with the female during the first year.

Interesting Facts
Moose are the largest members of the deer family, Cervidae. Their tracks are heart-shaped, like a white-tailed deer, but measure from 4 to over 6 inches long and 3.5-5.75 inches wide.

The moose gets its common name from the Algonquins, which means “eater of twigs” and “one who strips the bark off of trees.” Its scientific name, Alces, means “elk.”

Moose have a strong sense of smell and hearing but their eyesight is poor. They are very fast runners, and have been clocked at 35 to 40 miles per hour.

Moose can live up to their mid-twenties but are susceptible to parasites, disease, malnutrition, and, in populated areas, collisions with automobiles. In New England, there are no predators capable of taking a healthy adult moose, but elsewhere in their range, grizzly bears and wolves are predators. In New England, regulated hunting seasons by special permit occur in Vermont, New Hampshire, and Maine.

One of the greatest mortality factors for an unhunted population of adult moose is the meningeal worm, a parasite of white-tailed deer. This parasite attacks the membranes surrounding the brain and spinal cord. Although not fatal to white-tailed deer, it is deadly for moose. The parasite passes from a deer through its feces, which are then eaten by snails. Moose obtain the parasite by inadvertently ingesting snails when browsing on vegetation.

Young moose that disperse into new territories during spring have been documented to travel 5-10 miles per day, sometimes traveling as far as 100 miles over a 5-week period, passing through a dozen towns.

Moose Management
Moose can present a serious threat to public safety under some circumstances. Although usually shy, moose can feel threatened and become aggressive during the rutting season or after calving. They also may demonstrate unpredictable behavior if they wander into populated areas. Under no circumstances should moose be approached. Although they may appear to be docile, moose should be given the healthy respect that New England’s largest land mammal warrants.

Moose are also potentially dangerous when involved in automobile collisions. They are very large, long-legged, and difficult to see under low light conditions (moose are most active at dusk and at night). Data collected from other states indicate that a moose/car collision is 30 times more likely to result in a human death than a deer/car collision. On the average, 1 out of 50 moose/car collisions results in a human fatality.

The DEEP’s primary concern regarding moose is public safety. Each moose observed in the state is monitored. The DEEP Wildlife Division and Environmental Conservation Police Division evaluate the potential threat presented by moose at a specific location in coordination with local health and safety officials. A recommendation (no action, hazing, immobilization, or euthanasia) is then made to the DEEP Commissioner, who will make a final decision on a course of action suitable for a particular moose situation.

Moose represent a dilemma for wildlife managers. Connecticut does have suitable moose habitat in some portions of the state. The presence of this wilderness species in Connecticut is a testament to the health of our environment. On the other hand, moose that wander into populated areas or onto roadways may threaten public safety. When such situations occur, officials must evaluate and choose from a limited number of response options. The level of public awareness, knowledge, and acceptance will, to a large extent, determine how well humans and moose can coexist in our heavily developed state.

The Technical Assistance Informational Series is 75 percent funded by Federal Aid to Wildlife Restoration - Pittman-Robertson (P-R) Program. The P-R Program provides funding through an excise tax on the sale of sporting firearms, ammunition, and archery equipment. The remaining 25 percent of the funding is matched by the Connecticut Wildlife Division. (rev. 10/17)