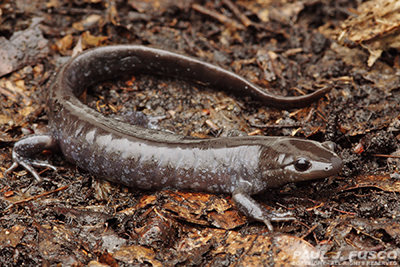 Background: The Jefferson salamander is a large member of the “mole” salamander family (Ambystomatidae). It spends most of its life underground, but congregates in mass during breeding cycles. In Connecticut, "pure" diploid Jefferson salamanders are uncommon and have been documented as occuring only with hybrid "complex" individuals. This hybridization occurred with the silmilar-looking blue-spotted salamander (Ambystoma laterale) as a result of post-ice age range overlap of both species.

The Jefferson salamander is highly sensitive to pollution and habitat destruction and fragmentation. Populations have been declining range-wide. Habitat protection is important for sustaining this amphibian, which is listed as a special concern species in Connecticut.

Range: The Jefferson salamander ranges from eastern Illinois through Kentucky and Virginia and up to southwestern New England. Populations mostly occur in far western Connecticut in northern Fairfield and Litchfield Counties, although some exist along the trap rock ridge system of Central Connecticut. All occur west of the Connecticut River.

Habitat and Diet: Jefferson salamanders are predominantly found in or near deciduous forests, where they prefer steep, rocky areas with cover, such as rotten logs or duff layers. They spend most of the year underground in burrows and are rarely encountered outside of the spring breeding season. Breeding sites are shallow, temporary woodland ponds (also known as vernal pools) with plenty of organic debris for attaching eggs. Most of these pools are filled by winter snowmelt or spring rains, and then dry up by late summer.

Life History: The Jefferson is one of the earliest amphibians to breed in the spring. When the first warm rains arrive on a spring night, these salamanders migrate in large numbers to temporary woodland breeding pools. Females pick up previously deposited packages of sperm called spermatophores. Following fertilization, sausage-shaped masses of approximately 30 eggs each are attached to submerged twigs or debris. After the eggs hatch, the larvae remain in the pool until metamorphosis occurs. Newly transformed salamanders will emerge from the wetland and disperse into the surrounding forest, seldom more than a mile from the breeding pool.

Interesting Facts: This salamander is named after Jefferson College in Pennsylvania, which is aptly named after President Thomas Jefferson.

Mole salamanders, like the Jefferson, have 5 toes on the rear feet but only 4 on the front.

As a defense, Jefferson salamanders can produce a milky, noxious secretion on their tail.

Conservation Concerns: Habitat protection is important for sustaining Jefferson salamander populations. This amphibian is highly sensitive to habitat disturbance, habitat fragmentation, and urbanization. Almost all remaining populations in Connecticut occur in undisturbed areas. The most vulnerable populations are those associated with the trap rock ridge system. If development continues in this salamander’s habitat, local extinctions may occur. Because the Jefferson salamander requires extensive tracts of forest surrounding breeding pools, buffer zones are extremely important to the success of this species.

Certain populations of this salamander are being impacted by a high number of roadkills during the spring breeding season when these animals migrate in large numbers to their temporary breeding pools. Where appropriate, measures to minimize roadkills should be taken, especially where new development is planned near breeding pools. Such measures may include enlarging buffer zones around breeding pools, providing tunnels or culverts for salamanders to cross under roads, and locating new roads away from salamander migration routes.

The Jefferson salamander is undergoing a range-wide decline. It also is of conservation concern throughout its northeastern United States range, with many states affording the species special status and/or protection. As a special concern species in Connecticut, Jefferson salamanders may not be collected and removed from the wild.

Aquatic breeding pools are crucial to many amphibians, including the Jefferson salamander. Managing temporary pools, as well as buffer zones in the surrounding forest, is extremely important for conserving the amphibians dependent on these habitats.

Salamanders should never be collected from the wild. Awareness and education of the Jefferson salamander's life history and habitats are invaluable tools for conserving this animal. If you locate a Jefferson salamander population or temporary breeding pool, please contact the DEEP Wildlife Division at 860-424-3011 or deep.ctwildlife@ct.gov.