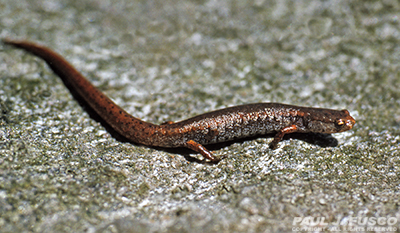 Background and Range: The four-toed salamander is Connecticut's smallest salamander. As a member of the lungless salamander family (Plethodontidae), it absorbs oxygen through its skin. This species is found statewide in Connecticut, most frequently in low-lying, non-calcareous areas. The population is currently assumed and listed as secure in our state.

Description: This small terrestrial salamander ranges from 2 to 3.5 inches in length (females are larger than males). The back is reddish brown, appearing slightly rough, granular, and dry. The belly is enamel white with black flecks. The cylindrical tail has a distinct constriction at its base (the point where the tail would break off if grabbed by a predator). As its name implies, this salamander has only 4 toes on the hind feet, unlike most of the lungless salamanders which have 5 toes.

Juveniles resemble adults but the tail constriction is poorly defined. Larval salamanders possess long bushy gills and a blunt head. Females have a more rounded snout, while males have a shortened and square-shaped snout.

Habitat and Diet: Four-toed salamanders are found in both moist and dry woodlands, as well as in wooded swamps. Preferred sites include sandy, acidic deciduous woodlands adjoining red maple swamps. These salamanders can be found under rocks, logs, and debris, often along the edges of swamps as well as on hummocks surrounded by water. Sphagnum moss is usually present nearby and is often used during nesting by the female.

Life History: This salamander breeds in autumn during September and October. Eggs are generally laid the following April. Each female lays between 18 to 41 eggs, depositing them in sphagnum and other mosses as well as in rotten wood. Often, the eggs are laid 2 to 6 inches above water so that the larvae can drop into the water upon hatching. The four-toed salamander has been observed nesting communally. Females often defend the eggs until they hatch about 5 weeks after being laid. The larvae wriggle into the water for an aquatic life stage that lasts about 6 weeks.

Interesting Facts: It takes about 2 to 3 years for a four-toed salamander to reach maturity.

If a four-toed salamander's tail is roughly handled or grabbed by a predator or a person, it detaches at the distinct basal constriction. After detaching, the tail vigorously wiggles, thereby distracting potential predators while the salamander crawls away. The tail will eventually grow back.

Conservation Concerns: Though the four-toed salamander population is secure in Connecticut, populations can still be affected by the loss and degradation of breeding pools and their upland habitats.

Awareness and education of the four-toed salamander's life history and habitats are invaluable tools for conservation. Work within your community to protect open space and water quality so as to preserve areas this salamander and other wildlife species live. Not only are salamanders important, but their presence indicates a healthy habitat.

If you happen to find a four-toed salamander, leave it where you found it and only take photographs. Salamanders should never be collected from the wild. If you lift any logs or rocks while rummaging through forests, remember to place them back exactly how you found them.

Additional information about salamanders is available on the Salamanders in Connecticut webpage.