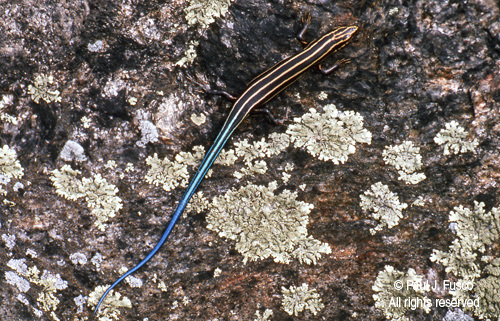 Background: The state-threatened common five-lined skink is the only lizard native to Connecticut. Skink populations are found in four widely separated areas in western Connecticut. Five-lined skinks have been documented on bluffs bordering the Housatonic River in southwestern Litchfield County; on ledges bordering the Housatonic River in northwestern New Haven County and the Naugatuck River; and along ledges in southwestern Hartford County.

The five-lined skink is rare and localized in southwestern New England. The small size and fragmented nature of skink populations leaves them vulnerable to ecological catastrophes.

Range: The range of the five-lined skink corresponds closely with the eastern deciduous forest. The species is found in southwestern New England (currently Vermont and Connecticut and historically in Massachusetts), south to northern Florida, west to Wisconsin, and in eastern parts of Kansas, Oklahoma, and Texas. Disjunct populations exist in northeastern Iowa, western Wisconsin, and Minnesota. This species is at its northeastern range limit in southwestern New England; however, several populations are found in Ontario, Canada.

Description: Five-lined skinks are smooth, shiny lizards with rows of tiny scales around the center of the body. They measure in length from 5 to 8.5 inches long, including the tail. The coloration is variable, depending on the age and sex of the skink. Young skinks have 5 white or yellowish stripes on a blackish body and a bright blue tail. As the skinks grow older and larger, the pattern becomes less conspicuous; the stripes darken, the body lightens, and the tail turns gray. Females usually retain some of the striped pattern; the broad dark band along the side of the body remains prominent. Adult males usually show traces of stripes, but tend to become nearly uniform brown or olive in coloration. Males are territorial during the breeding season, and develop orange-red coloration on the head and jaws as a display of aggression.

Habitat and Diet: The preferred habitat of the five-lined skink includes steep, rocky areas with open ledge, patchy tree and shrub cover, and an abundance of rotten logs and loose rock slabs. These habitats are usually adjacent to moist deciduous forests.

Life History: In Connecticut, courtship and mating take place during April or May. About 6 weeks later, in June or July, the female digs a small nest cavity in leaf litter, a rotting log, or loose soil and deposits between 4 to 20 eggs (typically 9 to 12). There is no covering on the nest, but the female guards the eggs during the month-long incubation period. The eggs increase in size during incubation. The eggs hatch during August and September. One to 2 days after the eggs hatch, the female leaves the young on their own and does not return.

Interesting Facts: Although five-lined skinks spend much of their time under rocks and other shelter, they will bask in sunny spots on logs or rocks. Rock climbers at several sites in Connecticut often see them running along cliffs. The lizards are primarily terrestrial, but will climb dead trees to find insects.

Skinks hibernate singly or in small groups from October through mid-March in decaying logs, under large rocks, or underground, below the frost line.

The five-lined skink is the only lizard found in New England, even though there are about 5,000 different species of lizards worldwide. Lizards are reptiles, and although at first glance they might look similar to salamanders, which are amphibians, they are very different animals. Lizards generally have scales that cover their bodies, claws on their feet, and external ear openings. Salamanders have smooth and moist skin, no claws, and no external ear openings.

When grasped by a predator, both adult and juvenile skinks will readily lose most of their tails. There are cleavage points along the tail vertebrae that facilitate the breakage, much like perforations on a piece of paper that make tearing the paper easier. The detached tail thrashes on the ground to distract the predator, generally allowing the lizard to escape. The five-lined skink will grow a new tail that is somewhat shorter than the original and somewhat gray in coloration.

The five-lined skink may live up to 6 years of age.

What You Can Do: If you ever find a skink in the wild, observe it from a distance and leave it alone. Report any possible sightings of these lizards in Connecticut to the DEEP Wildlife Division at deep.wildlife@ct.gov or call 860-424-3011.

Wild skinks should NOT be kept as pets. Those sold in pet stores should NOT be released to the wild as they can introduce diseases to wild and genetically distinct populations.

The production of this Endangered and Threatened Species Fact Sheet Series is made possible by donations to the Endangered Species/Wildlife Income Tax Checkoff Fund.
(rev. 8/14)