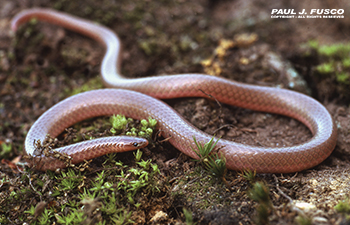 Background and Range: The eastern wormsnake is so named because it resembles an earthworm. This small, burrowing snake is a southern species, just entering southern New England and adjacent sections of New York. It has been found throughout Connecticut, except for the extreme northwestern corner. The wormsnake is most widely distributed in the low-lying areas of Connecticut. It may be excluded from higher elevations by poorly drained and rocky soils, which are not suitable for burrowing, and by late spring and early autumn frosts. Suburban development that spreads across low-lying portions of Connecticut has resulted in the loss of large areas of habitat suitable for this species.

The eastern wormsnake ranges from southern Massachusetts and Rhode Island, southwestward through Connecticut and southeastern New York (including Long Island), to northwestern Georgia. Its range also includes New Jersey, southeastern Pennsylvania, the Virginias, and the Carolinas.

Description: This small, slender snake has a worm-like appearance. It has a chocolate brown-gray body with pink belly; small flattened head with tiny eyes; stubby tail with pointed tip; and smooth, polished scales. Individuals range from 7-14 inches in length. At hatching, juveniles are patterned similar to adults, but the body is darker brown and the belly is a brighter pink.

Habitat and Diet: The eastern wormsnake prefers well-drained, sandy soils for burrowing. It is typically found in moist habitats, usually in or near deciduous woodlands and occasionally in gardens.
The primary food item is earthworms, but the wormsnake will also feed on soft-bodied insects.

Life History: Eastern wormsnakes are active from May through September. They mate both in spring and autumn. Females can store sperm over winter. Small, thin-shelled eggs (2-8) are laid in June or July, usually under rocks or in decaying logs. They hatch between early August and mid-September. Hatchlings are 3-4 inches in length and reach maturity after about 3 years. No parental care is involved.

Interesting Facts: Although extremely secretive and rarely found due to their underground habits, wormsnakes may be more abundant and widespread than indicated by records. Due to these same habits, there is little detailed information on the activity cycles of wormsnakes in southern New England. These snakes may be active during both the day and night, and they are rarely encountered in the open, as they are usually under flat slabs of rock, logs, bark, boards, and other debris. They will spend the winter underground.

Predators include other snakes (copperheads, racers, milksnakes), opossums, shrews, and moles.
The wormsnake is sometimes confused with the northern redbelly snake.

Take the time to learn about, understand, and respect this vitally important reptile, and share your knowledge with others. If you encounter an eastern wormsnake, observe it from a distance and allow it to go on its way. All snakes will retreat from humans if given a chance.

Even though wormsnakes are mild-tempered, you should try not to disturb snakes by getting too close or handling them.

The killing of this snake is strongly discouraged. Additionally, wild snakes should NEVER be collected as a pet. If you encounter a snake problem, assistance and more information about snakes can be found by visiting the Snakes in Connecticut webpage or calling the DEEP Wildlife Division at 860-424-3011.