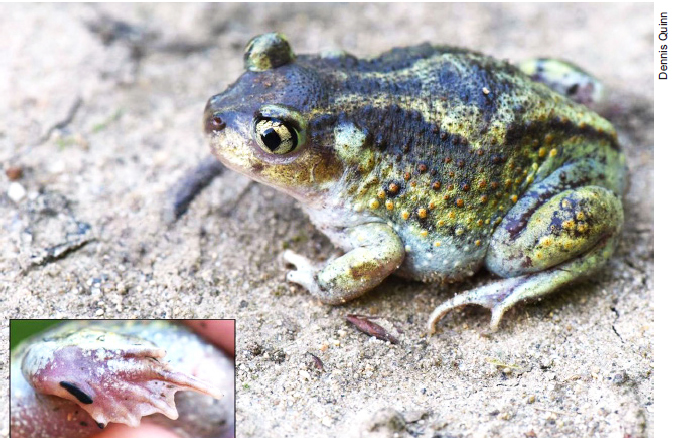 Background: The Eastern spadefoot belongs to the genus Scaphiopus, which differs from true toads in having vertical pupils, relatively smooth skin, and a distinct spade-like projection on the hind limbs from which its common name is derived. This spade-like projection is used in the excavation of burrows. The Eastern spadefoot is among the rarest amphibians in the northeastern United States. While often referred to as a toad, the Eastern spadefoot is actually a primitive frog. Spadefoots are listed as endangered under Connecticut's Endangered Species Act and designated as a species of greatest conservation need in Connecticut's Wildlife Action Plan. Spadefoots are secretive, spending most of the year in subterranean burrows, emerging at night to feed during warm-weathered rains.

Range: The Eastern spadefoot occurs from southern New England, south to Florida along the Atlantic Coastal Plain and as far west as the Mississippi Valley north to Tennessee. New England populations are scattered and typically occur in low elevation river valleys with sandy, well-drained soils.

Description: The spadefoot is a medium-sized amphibian, ranging from 1.75 to 3 inches in body length. The skin is smooth and warts are very small and scattered. The spadefoot has large, bright yellow eyes with vertical pupils. The dorsal (back) coloration ranges from brown to gray with two yellowish stripes running down the back and forming a vase-shaped pattern. The venter (belly) is translucent white with a pinkish cast.

Habitat and Diet: Spadefoots require dry environments with sandy or loose soils that are sparsely vegetated. These soils are preferred because spadefoots can easily excavate burrows in them. These amphibians breed and reproduce in temporary bodies of water (e.g., vernal pools, flooded fields, etc.). When spadefoots emerge from their burrows they are opportunistic hunters, feeding on a variety of spiders and insects.

Life History: Spadefoots spend most of their time in underground burrows, awaiting the warmer rains of late spring, summer, and fall. They can remain dormant for months in a state of torpor. The Eastern spadefoot will dig its burrow several inches below ground but has been known to dig as deep as 8 feet. When heavy rains fall, typically of 2 or more inches, the amphibians emerge from their burrows in large numbers and explosively breed. Eggs are strewn out in irregular bands under water and attached to grass or plant stems. The eggs can hatch in as little as 24 hours with rapidly developing tadpoles that can grow into land-dwelling amphibians in as little as 14 days. Tadpoles feed opportunistically on vegetation, invertebrates, or other amphibian larvae.

Interesting Facts: Because the breeding pools used by spadefoots are ephemeral (short-lived), they do not often support larval development of other Connecticut amphibians. Therefore, spadefoots often breed alone. Spadefoot tadpoles can have cannibalistic tendencies, often eating their own siblings. The breeding call of adult male spadefoots sound like "caw...caw", something similar to that of a young crow. During hibernation, spadefoots curl into a tight ball and excrete a fluid that hardens the soil around them, forming a compact chamber to retain moisture.

Conservation Concerns: Spadefoot populations in Connecticut appear to be in decline. Many localized populations have been extirpated, presumably due to urban/suburban developments impacting their breeding pools. Urbanization of early successional habitats and alteration of breeding pools, which are often not afforded wetland protection status due to their highly short-lived nature, are the greatest causes of decline. Some populations in eastern Connecticut remain relatively undisturbed but face threats from both agriculture and sand and gravel extraction. Due to their very secretive lifestyle, it can be difficult to detect the presence of spadefoots and accurately estimate population size. Eastern spadefoots are protected by the Connecticut Endangered Species Act, and collection of these amphibians is prohibited.

What You Can Do: If you find an Eastern spadefoot, please take a photograph and report it to the Wildlife Division at deep.wildlife@ct.gov or call 860-424-3011. It is best to observe the animal(s) from a distance, and never attempt to capture an individual – it is both harmful to the animal and illegal. Additionally, you may elect to properly manage breeding pool areas if populations occur on your property, after consultation with the CT DEEP Wildlife Division. Often, education and awareness of these endangered amphibians can be a powerful conservation tool.

The production of this Endangered and Threatened Species Fact Sheet Series is made possible by donations to the Endangered Species-Wildlife Income Tax Checkoff Fund.