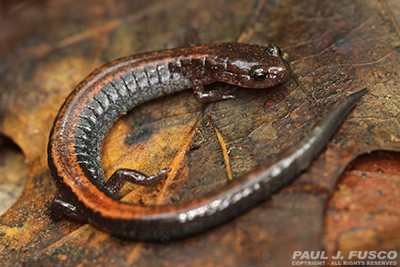 Background and Range: The redback salamander is Connecticut's most ubiquitous amphibian. It is found in forested areas throughout the state, sometimes in high numbers. This small amphibian is a vital component of the forest food chain as it is both a predator on a variety of macroinvertebrates and prey for a variety of small vertebrates. Even with its small size, nocturnal behavior, and lack of vocalizations, the redback is commonly encountered under leaf litter and woody debris on the forest floor. A member of the lung-less salamander family (Plethodontidae), this salamander lacks lungs, absorbing oxygen through its skin.

The redback salamander is widely distributed over the northeastern United States and southeastern Canada south to North Carolina and eastern Tennessee. This species ranges westward along the northern shores of the Great Lakes through Ontario and around the western end of Lake Superior to eastern Minnesota and northern Wisconsin, and south around Lake Michigan to eastern Illinois.

Description: This highly variable, small salamander measures about 2 to 4 inches long. It has short legs and a cylindrical tail. The redback salamander occurs in two color phases: striped or "redback" and unstriped or "leadback" phases. The "redback" phase has a reddish stripe that runs down its back from the base of the head to the tail. This is the most common of the two phases. The "leadback" phase is uniformly dark gray to black. Another color variation found with some regularity in northwestern Connecticut displays bright red or pink on the back, sides, legs, and tail. It is cream colored underneath. It is believed this color variation is to mimic the red eft (another species of salamander) to discourage predation. The red eft exudes a toxic skin secretion that is distasteful to predators. 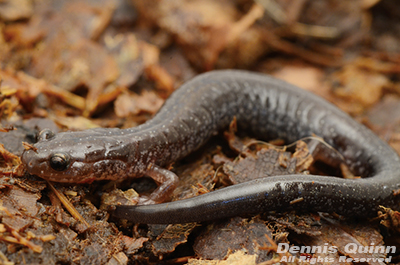 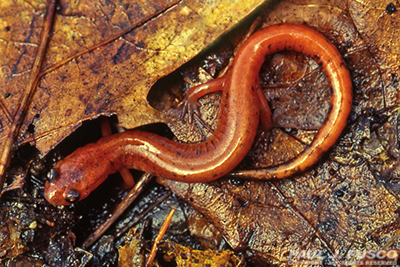 Habitat and Diet: Redback salamanders are found in a wide variety of elevations and habitats, although they prefer moist forests, especially forested rocky hillsides. They are tolerant of urbanization, and can be found wherever a small patch of woodland remains. These salamanders spend much of their life underground or underneath rocks, logs, fallen bark, or moist leaf litter. During rainy nights, they may climb vegetation in search of their prey of mites, insects, and other invertebrates.

Life History: The redback salamander typically lays 3 to 14 eggs in June and July, suspended like a small cluster of grapes within a rotting log or under a rock. The female stays with this nest and will defend it aggressively. Redback salamanders do not have an aquatic larval stage. Instead, the larval stage occurs within the egg, and the young hatch into fully developed miniature adults after 6 to 8 weeks. The young redbacks are able to leave the nest at about four weeks of age. They become sexually mature 2 years later.

Interesting Facts: The redback salamander is entirely land-dwelling and usually will not go to water, even to breed. This lack of dependence on standing water has enabled these salamanders to survive in fragmented patches of forest and in wooded parks surrounded by urban development.

Large numbers of redback salamanders can sometimes be located in an area. During wet weather, they can be found near the ground surface or crossing roads at night.

This salamander is often confused with the northern two-lined and four-toed salamanders.

Conservation Concerns: Redback salamanders are tied to moist forest habitats. Destruction of these habitats is the greatest threat to populations.

Pollutants, including herbicides and pesticides, are easily absorbed and toxic to all salamanders, including the redback.

If you find a redback salamander in the wild, leave it where you found it and only take photographs. Every individual is vitally important to its local population.

Help conserve forested habitat in your community to allow this widespread species of salamander remain common throughout our state.

Be careful driving on roads during wet spring nights. Salamanders may be crossing the roads.