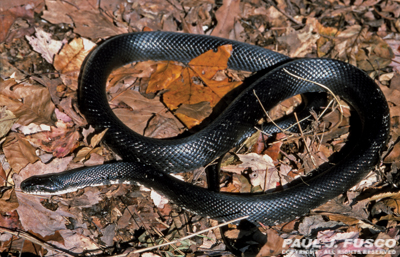 Background: The eastern ratsnake is the largest snake found in Connecticut. It is irregularly distributed within the state, but is locally common. It thrives in areas that contain a mixture of houses, agriculture, and woodland, taking advantage of the increased rodent and bird populations that often occur in patchwork habitats. Reforestation of Connecticut's landscape, due to the decline in farming, has benefited the eastern ratsnake population. However, populations are threatened by habitat alteration, overcollection for the pet trade, and roads, which are a barrier to migration and a source of mortality (snakes are often killed by vehicles).

In southern New England, the eastern ratsnake is more widespread at low elevations. In Connecticut, its center of abundance encompasses the southeastern hills and coastal region of the state, from New Haven eastward to the Rhode Island state line. Ratsnakes are irregularly distributed in the coastal areas and southwestern hills up to southern Litchfield County. In the Central Connecticut Lowland, they are found along the trap rock ridge formations northward into central Massachusetts.

Description: This large, black, heavy-bodied snake can measure between 46 and 68 inches long. Flecks of white are often present on the black body, and the snake has a white chin and a belly with a black checkerboard pattern. The scales along the backbone are lightly keeled (slight raised ridge along the center).

Juvenile eastern ratsnakes are light gray with brown/black blotches, a large head, and a black checkerboard belly. The lightly keeled scales are difficult to see in juvenile snakes.

The eastern ratsnake is distinguished from the similar-looking northern black racer by its lightly keeled scales, thin neck, and the black checkerboard pattern on the belly. It has square-shaped body compared to the cylindrical-shaped body of the black racer. The ratsnake has a well-defined iris, while the black racer has more uniformly dark eyes.

Habitat and Diet: The eastern ratsnake inhabits rough, forested terrain with ledges and rock outcrops, as well as small meadows adjacent to woodlands.

Active hunters, eastern ratsnakes prey on rodents and other small mammals (chipmunks, moles, mice, rats), small birds, reptiles, amphibians, insects, and sometimes bird eggs. They will enter barns and attics in search of food. The ratsnake is a constrictor; it seizes prey with its jaws and wraps tightly around the animal, squeezing until it suffocates. The snake then swallows the prey whole.

Life History: Eastern ratsnakes enter their winter dens in late autumn, usually in early to mid-November. Dens are generally located in rock crevices or old burrows, and may be used year after year. Dens are typically communal; they may contain several ratsnakes and/or other snake species, such as black racers, timber rattlesnakes, and copperheads.

Ratsnakes emerge from their winter dens in mid- to late April, and mating season follows soon after through May. Eight to 12 eggs are laid in piles of decaying leaves and abandoned burrows, or under stumps and hollow logs. The females do not care for the eggs. After hatching in late summer, the young snakes must fend for themselves.

Interesting Facts: The eastern ratsnake is also known as the black rat snake. It is active in the daytime, but can also be out at night.

The ratsnake's square-shaped body enables it to climb high in trees, attics, haylofts, and other structures. This snake is often found around old barns or buildings where it can find plenty of food, mainly rodents. For this reason, ratsnakes play an essential role in controlling destructive rodent populations. On the other hand, ratsnakes are preyed upon by mink, larger carnivores, and large birds of prey.

Conservation: Eastern ratsnakes, just like many other snake species, are frequently killed by vehicles when they cross roads or bask on the warm pavement.

Large tracts of the eastern ratsnake's habitat are protected in state and local parks, state forests, private sanctuaries, and watershed properties. Many of the steep ledge and rocky areas inhabited by this snake are unsuitable for intensive development, however large-scale quarrying has destroyed some ledge habitats and winter denning sites.

Take the time to learn about, understand, and respect this vitally important reptile, and share your knowledge with others. Eastern ratsnakes are harmless to people and are NOT venomous. They do not pose a nuisance or impact humans or human activity. However, they are often encountered in yards and around outbuildings. If you encounter an eastern ratsnake, observe it from a distance and allow it to go on its way. All snakes will retreat from humans if given a chance.

Eastern ratsnakes are popular with the pet trade, therefore populations are often vulnerable to overcollection. This or any other wild snake should NEVER be collected from the wild to be kept as a pet. The removal of even one individual can negatively affect the population. In addition, wild snakes kept in captivity often succumb to infection, parasites, and stress. Also, refrain from purchasing snakes that have been collected from the wild. Snakes are long-lived animals that require specialized care. They grow throughout their lives, and ratsnakes have the potential to grow to more than 4 feet long. Once a pet owner tires of caring for a snake, it should NEVER be released back into the wild. It may harbor diseases or parasites that could affect wild populations. Plus, a once-captive snake will probably perish after release.

The killing of snakes is strongly discouraged. If you encounter a snake problem, assistance and more information about snakes can be found by visiting the Snakes in Connecticut webpage or calling the DEEP Wildlife Division at 860-424-3011.