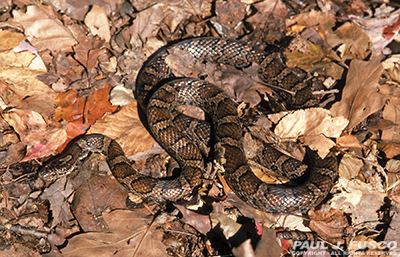 Background: The eastern milksnake is one of the more common snakes found in Connecticut. Its frequent occurrence in rodent-infested barns led to the erroneous belief that they suck milk from cows by night; hence the name milksnake. Milksnakes also are commonly found around houses and outbuildings. When discovered by people, this harmless snake is often mistaken for the venomous copperhead and killed. The majority of “venomous” snake reports come from anxious homeowners who believe they have a copperhead in the basement. With further investigation and a more accurate identification, these “copperheads” almost always turn out to be milksnakes. Either way, there is no reason to kill these snake species, venomous or not. Neither snake is aggressive unless handled.

Range: Eastern milksnakes range from southeastern Maine to central Minnesota, south to Tennessee and western North Carolina. They are common throughout Connecticut, except in New London county.

Description: Eastern milksnakes are small and slender. The head is narrow and only slightly wider at the base than the neck. The nape usually has a distinct light "V-" or "Y-shaped" patch. Adults have 3 to 5 rows of brown or reddish-brown blotches down the back, while young milksnakes have bright red blotches. The body is gray to tan, while the belly exhibits a black-and-white checkerboard pattern. Adults measure from 19 to 40 inches long.

Habitat and Diet: Milksnakes occupy a variety of habitats, including farmland, disturbed areas, meadows, river bottoms, bogs, rocky hillsides, and coniferous and deciduous forests. To support milksnakes, these habitat types must have plenty of cover and a healthy rodent population. Milksnakes spend the colder months in subterranean dens in drier sites.

This active, usually nocturnal hunter feeds mainly on mice, but will also take other small mammals, other snakes, birds and their eggs, and slugs. Milksnakes are constrictors. After striking and seizing prey, they quickly wrap their bodies around the prey animal. Constrictors do not actually squeeze prey to death but instead suffocate it. When the prey animal exhales, the snake constricts, preventing the prey from inhaling. Snakes must swallow their prey whole; therefore, killing the prey prior to ingestion reduces the risk of injury to the snake from bites and scratches.

Life History: Adults breed in June with females laying clutches of 6 to 24 (13 is average) eggs in loose soil or rotting logs from mid-June to July. The eggs incubate for a period of 42 to 56 days with hatchlings emerging in late August to October. The young that emerge are brightly colored, but the color dulls as the snakes age.

Interesting Facts: Milksnakes are secretive and often go unnoticed as they spend most of their time hidden under logs, boards, rocks, or other debris. They seldom bask in the open and are active mainly at night.

When first encountered, a milksnake either remains motionless or attempts to crawl away. If thoroughly disturbed, it may vibrate the tip of its tail rapidly and strike repeatedly. However, the teeth can barely puncture skin. Snakes bite only to capture food or in defense. Defensive biting in all snakes, venomous or not, is a last resort. If a snake must bite in defense, it has entered into a direct confrontation with a predator and risk of injury to the snake is high. Snakes will always attempt to escape before entering into a direct confrontation.

Take the time to learn about, understand, and respect this vitally important reptile, and share your knowledge with others. Understanding that the milksnake is non-venomous is important. If startled or cornered, this snake may strike in self defense; however, no snake will deliberately attack a human. If you encounter an eastern milksnake, observe it from a distance and allow it to go on its way. All snakes will retreat from humans if given a chance.

If a milksnake is found in the home and positively identified as a milksnake, it can be easily and safely removed. A pair of garden gloves is sufficient protection from a milksnake bite. A snake should be picked up carefully to avoid excessive squeezing because snakes have delicate bodies and are easily injured. Place the snake in a cloth bag and release it in an area not far from the point of capture.

The killing of snakes is strongly discouraged. Additionally, wild snakes should NEVER be collected as pets. If you encounter a snake problem, assistance and more information about snakes can be found by visiting the Snakes in Connecticut webpage or calling the DEEP Wildlife Division at 860-424-3011.