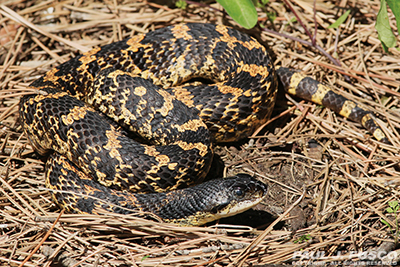 Background and Range: The eastern hog-nosed snake is one of the most unique snakes found in Connecticut because of its behavior, habits, and appearance. It also is one of the rarer snakes in our state due to population declines caused by human disturbance and habitat loss. This snake is currently listed as a state species of special concern. Hog-nosed snakes are susceptible to human disturbances and habitat degradation. In addition, fluctuations in prey population densities can affect this snake's numbers. Human persecution of this harmless snake also is a serious threat.

There are different species of hog-nosed snakes; however, Connecticut is home to only the eastern species. This snake is found in locations throughout the state, but is more localized inland at moderate elevations. Despite being well spread out in Connecticut, populations are not always abundant in numbers.

Description: This short, stout snake usually measures about 21 to 32 inches in length and has distinctly keeled dorsal scales (raised ridge along the center). Its coloration can be highly variable – some individuals have alternating light and dark patches with vivid yellows, browns, reds, and oranges, while others may be more uniformly black or dark gray. The belly is mottled gray but the tail underside is noticeably lighter or even white. Juveniles resemble adults, but are less vivid in coloration and their patterning is often predominantly gray with deep brown blotches. The hog-nosed snake's most distinctive field mark is an upturned, hog-like snout, which is used for digging up this snake's main food item, toads. It is the only snake in the United States with this characteristic.

In addition to toads, hog-nosed snakes will also eat frogs, small mammals, salamanders, eggs, some birds, and insects. As a defense tactic, toads fill their lungs with air and “puff” up. However, the hog-nosed snake has two enlarged teeth that are used to deflate toads so that they are easier to swallow. Toxins in the skin glands of toads are neutralized by enzymes in the snake's digestive tract.

Life History: Shortly after emerging from their underground winter dens, hog-nosed snakes search for a mate. In early summer, the female lays from 4 to over 50 eggs in a shallow cavity in loose or sandy soil. The young snakes hatch from the eggs in about 60 days, and must fend for themselves upon hatching. No parental care is involved.

Interesting Facts: This completely harmless, non-venomous snake can put on an act that often frightens or alarms those who encounter it. When feeling threatened, the hog-nosed snake will try to bluff its way out of a situation by coiling, flattening its head and neck to form a cobra-like hood, inflating its body, hissing fiercely, and striking violently. The strike, usually made with the mouth closed, almost always falls short of the target. These behaviors have earned the hog-nosed other names, such as puff adder, blow snake, and hissing viper. If these tactics do not scare away a predator, the snake will writhe about, excrete a foul-smelling musk, and then turn over with its mouth open, tongue hanging out, and lie still, feigning death. If the snake is turned over on its belly, it will roll over on its back again. Once danger passes, the snake will lift up its head, look around, turn back over on its belly, and proceed on its way. These unique behaviors often have people convinced that the hog-nosed snake is venomous, which sometimes results in the snake's death due to misidentification and misunderstanding.

The hog-nosed snake is completely terrestrial, although it will enter water when moving between areas. It is active during daylight, and often observed basking in sunny areas. Cover may be sought under shrubs, logs, or in shallow burrows in sandy soil.

When feeling threatened, the hog-nosed snake will try to bluff its way out of a situation by coiling, flattening its head and neck to form a cobra-like hood, inflating its body, hissing fiercely, and striking violently.

Take the time to learn about, understand, and respect this vitally important reptile, and share your knowledge with others. Being able to identify and educate others about the eastern hog-nosed snake can help conserve this species. The more people that are aware of the physical and behavioral identification of this unique snake, the more individuals that can be spared from unnecessary killing. If you encounter a hog-nosed snake, observe it from a distance and allow it to go on its way. All snakes will retreat from humans if given a chance.

Do NOT attempt to kill any hog-nosed snakes under any circumstances as this is an illegal action. Hog-nosed snakes are protected by Connecticut's Endangered Species Act and persons who kill or collect this special concern snake could be faced with fines or legal action. If you see or know of any suspicious or neglectful activity directed towards these snakes, you can report violators to the DEEP at the 24-hour, toll-free TIP hotline (800-842-HELP) or DEEP Dispatch at 860-424-3333. Additionally, wild snakes should NEVER be collected as a pet.

If you encounter a snake problem, assistance and more information about snakes can be found by visiting the Snakes in Connecticut webpage or calling the DEEP Wildlife Division at 860-424-3011.