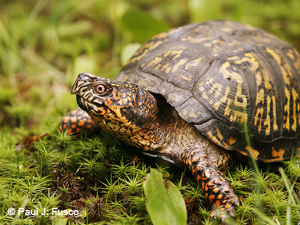 Description: The eastern box turtle is probably the most familiar of the 8 species of turtles found in Connecticut's landscape. It is known for its high-domed carapace (top shell). The carapace has irregular yellow or orange blotches on a brown to black background that mimic sunlight dappling on the forest floor. The plastron (under shell) may be brown or black and may have an irregular pattern of cream or yellow. The length of the carapace usually ranges from 4.5 to 6.5 inches, but can measure up to 8 inches long. The shell is made up of a combination of scales and bones, and it includes the ribs and much of the backbone.

Range: Eastern box turtles are found throughout Connecticut, except at the highest elevations. They range from southeastern Maine to southeastern New York, west to central Illinois, and south to northern Florida.

Habitat and Diet: In Connecticut, this terrestrial turtle inhabits a variety of habitats, including woodlands, field edges, thickets, marshes, bogs, and stream banks. Typically, however, box turtles are found in well-drained forest bottomlands and open deciduous forests. They will use wetland areas at various times during the season. During the hottest part of a summer day, they will wander to find springs and seepages where they can burrow into the moist soil. Activity is restricted to mornings and evenings during summer, with little to no nighttime activity, except for egg-laying females. Box turtles have a limited home range where they spend their entire life, ranging from 0.5 to 10 acres (usually less than 2 acres).

Life History: From October to April, box turtles hibernate by burrowing into loose soil, decaying vegetation, and mud. They tend to hibernate in woodlands, on the edge of woodlands, and sometimes near closed canopy wetlands in the forest. Box turtles may return to the same place to hibernate year after year. As soon as they come out of hibernation, box turtles begin feeding and searching for mates.

The breeding season begins in April and may continue through fall. Box turtles usually do not breed until they are about 10 years old. This late maturity is a result of their long lifespan, which can range up to 50 to even over 100 years of age. The females do not have to mate every year to lay eggs as they can store sperm for up to 4 years. In mid-May to late June, the females will travel from a few feet to more than a mile within their home range to find a location to dig a nest and lay their eggs. The 3 to 8 eggs are covered with dirt and left to be warmed by the sun. During this vulnerable time, skunks, foxes, snakes, crows, and raccoons often raid nests. Sometimes, entire nests are destroyed. If the eggs survive, they will hatch in late summer to early fall (about 2 months after being laid). If they hatch in the fall, the young turtles may spend the winter in the nest and come out the following spring.

As soon as the young turtles hatch, they are on their own and receive no care from the adults. This is a dangerous time for young box turtles because they do not develop the hinge for closing into their shell until they are about 4 to 5 years old. Until then, they cannot entirely retreat into their shells. Raccoons, skunks, foxes, dogs, and some birds will prey on young turtles.

Conservation Concerns: The eastern box turtle was once common throughout the state, mostly in the central Connecticut lowlands. However, its distribution is now spotty, although where found, turtles may be locally abundant. Because of the population decline in Connecticut, the box turtle was added to the state's List of Endangered, Threatened, and Special Concern Species when it was revised in 1998. It is currently listed as a species of special concern. The box turtle also is protected from international trade by the 1994 CITES treaty. It is of conservation concern in all the states where it occurs at its northeastern range limit, which includes southern New England and southeastern New York.

Many states have laws that protect box turtles and prohibit their collection. In Connecticut, eastern box turtles cannot be collected from the wild (DEP regulations 26-66-14A). These regulations provide some protection for the turtles, but not enough to combat some of the even bigger threats these animals face. The main threats in Connecticut (and other states) are loss and fragmentation of habitat due to deforestation and spreading suburban development; vehicle strikes on the busy roads that bisect the landscape; and indiscriminate (and now illegal) collection of individuals for pets.

Loss of habitat is probably the greatest threat to turtles. Some turtles may be killed directly by construction activities, but many more are lost when important habitat areas for shelter, feeding, hibernation, or nesting are destroyed. As remaining habitat is fragmented into smaller pieces, turtle populations can become small and isolated.

Adult box turtles are relatively free from predators due to their unique shells. The shell of a box turtle is extremely hard. However, the shell is not hard enough to survive being run over by a vehicle. Roads bisecting turtle habitat can seriously deplete the local population. Most vehicle fatalities are pregnant females searching for a nest site.

How You Can Help

The production of this Endangered and Threatened Species Fact Sheet Series is made possible by donations to the Endangered Species-Wildlife Income Tax Checkoff Fund.