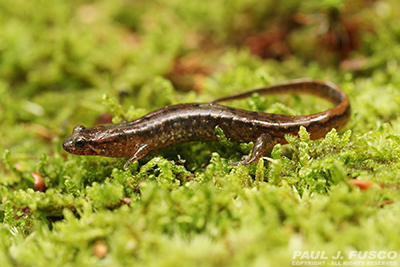 Background and Range: The northern dusky salamander is in the lungless salamander family (Plethodontidae). This species was historically distributed widely in streams, springs, and seepage areas throughout Connecticut. However, it has become scarce in more developed areas of the state, especially in Fairfield, New Haven, and Hartford Counties.

The northern dusky salamander ranges from south Quebec and southern New Brunswick, down the Appalachians to its southernmost point in mid-South Carolina. Its western extent reaches east Indiana and the eastern half of Kentucky. In Connecticut, it is found statewide but only sparsely in New London and Fairfield counties. 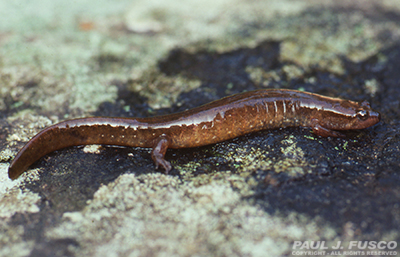 Description: This stout, medium-sized salamander exhibits variable brown coloration with mottling, and a translucent belly that has “salt and pepper” patterning. The tail is flattened laterally, with a knife-like top edge. A small white line runs from the jaw to the eye, and a groove goes from each nostril to the jaw edge. Hind legs are noticeably larger than forelimbs.

Younger individuals have a greater range in color from olive to chestnut to dark tan. Larvae possess a few pairs of yellowish spots bordered with a dark, wavy lateral line that goes along the back. Larvae can be confused with the larger two-lined salamander; however, the two-lined has less pronounced rear limbs.

Habitat and Diet: The northern dusky is usually found in or near freshwater, such as streams, springs, and/or areas with seepage. These sites tend to be associated with closed canopy deciduous or coniferous forests. Much of the aquatic portions of habitat have soft substrates. The salamanders usually use rocks, logs, or other debris for shelter. Dusky salamanders share habitat with two other native species, the two-lined and spring salamanders.

Life History: Unlike many other salamanders, the northern dusky is a late breeder. Courtship can be quite extensive, with the male working hard to impress the female. He may rub her back, snap his body, brush against her chin, and even nibble at her, all while releasing pheromones (a chemical substance that is emitted to produce a response out of another animal) to entice her. Females deposit approximately 10 to 50 eggs in or near water and underneath organic debris from June to September. They then remain with the eggs, aggressively protecting them during the roughly 5-week incubation period. Larvae hatch with fully functioning limbs and external gills and spend about 2 weeks terrestrially near the female before taking to the water where they will overwinter. Transformation (metamorphosis) to the adult stage occurs the following spring/summer and sexual maturity occurs in 3 to 4 years.

Interesting Facts: In closed canopy, shaded areas, dusky salamanders will spend time foraging in almost any weather condition. However, in areas with direct sunlight, they will hide beneath shelter, being more active at night.

Dusky salamanders are altitude tolerant, being found from sea level to high in the Appalachians.

Conservation Concerns: The dusky salamander is an important indicator of healthy streams, springs, and seeps. Conserving this species relies heavily upon protecting its habitat and preventing encroachment. The population decline observed in Connecticut is attributed to changes in stream hydrology that are a result of large increases in the amount of impervious surfaces (e.g., roads, roofs, parking lots, patios). Large areas of impervious surfaces result in increasingly rapid runoff of stormwater and increased flood frequency. The ecological result of this rapid runoff is a process known as stream scouring. Scouring radically alters a streambed choked with organic detritus, mud, and fallen logs, which is the favored habitat of the dusky salamander, to a rocky streambed flushed clean of organic material.

Awareness and education of this salamander's life history and habits are invaluable tools for conservation. Consider the preservation of important spring and seepage habitat types. Not only are the salamanders important, but their presence indicates a healthy wetland.

If you happen to find a dusky salamander, admire it from a distance and then let it be. This species is sensitive to disturbances. If you lift any rocks while searching through springs and seepages, remember to place them back exactly how they were. Salamanders should never be collected from the wild. Report any observations of dusky salamanders to the DEEP Wildlife Division at 860-424-3011 or deep.ctwildlife@ct.gov.