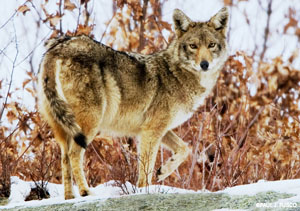 Background: Coyotes were not originally found in Connecticut, but have extended their range eastward during the last 100 years from the western plains and midwestern United States, through Canada and into the northeastern and mid-Atlantic states. Coyotes were first reported in Connecticut in the mid-1950s. For the next 10 years, most coyote reports were from northwestern Connecticut. Coyotes eventually expanded their range throughout the entire state and are now a part of Connecticut’s ecosystem. The coyote is one wildlife species that has adapted to human-disturbed environments and can thrive in close proximity to populated areas.

Range: Originally an inhabitant of the western plains of the United States, the coyote now occurs from Alaska south into Central America and east from the Atlantic Provinces to the southeastern United States.

Description: A typical coyote resembles a small, lanky German shepherd, but several characteristics distinguish it from a dog. Coyotes tend to be more slender and have wide, pointed ears; a long, tapered muzzle; yellow eyes; slender legs; small feet; and a straight, bushy tail which is carried low to the ground. The pelage (fur) is usually a grizzled-gray color with a cream-colored or white underside, but coloration is variable with individuals having blonde, reddish, and charcoal coat colors. Coat color does not vary between the sexes. Most coyotes have dark hairs over the back and a black-tipped tail, which has a black spot near its base covering a distinctive scent gland. However, not all coyotes have the black markings.

The eastern coyote is larger than its western counterpart. Most adults are about 48-60 inches long from nose to tail and weigh between 30 to 50 pounds, with males typically weighing more than females.

Habitat and Diet: Coyotes are opportunistic and use a variety of habitats, including developed areas like wooded suburbs, parks, beaches, and office parks. Their ability to survive and take advantage of food sources found in and around these “man-made” habitats has resulted in an increase in coyote sightings and related conflicts. A coyote’s diet consists predominantly of mice, woodchucks, squirrels, rabbits, deer, some fruits, carrion, and when available, garbage. Some coyotes will also prey on small livestock, poultry, and small pets. In Connecticut, unsupervised pets, particularly outdoor cats and small dogs (less than 25 pounds) are vulnerable to coyote attacks.

Life History: Coyotes are monogamous. The male and female usually maintain pair bonds for several years. In Connecticut, the breeding season is from January to March, and the gestation period is about 63 days. Although adults can dig their own dens, they often enlarge an abandoned woodchuck or fox burrow. Pups are born in spring (April to mid-May), and litters range in size from 1 to as many as 12 pups; the average in Connecticut is 7. Both adults care for the young and will readily move them if disturbed. Pups are weaned at about 6 to 8 weeks and begin foraging and hunting with the adults when they are 8 to 13 weeks old.

The family group usually breaks up in fall or early winter when the young disperse. Young coyotes may travel long distances in search of new territories, giving this species a rapid potential for colonization. Although nearly full grown by their ninth month, eastern coyotes may not breed until they are nearly 2 years old.

Coyotes are biologically able to reproduce with domestic dogs, although because of several barriers, they rarely do. For instance, both male and female coyotes are fertile for only a short time during the year. Also, young coydogs rarely survive because male domestic dogs that breed with female coyotes do not remain with her to assist with parental care. The offspring of a coyote/domestic dog mating are often infertile.

Coyotes use a variety of vocalizations to communicate with one another. Howls, yelps, and high-pitched cries are best known, but they also bark, growl, wail, and squeal. Family groups yelping in unison can create the illusion of a dozen or more performing together. Coyotes are most often heard around dawn and dusk. However, they may respond to sirens and fire whistles at any time of day or night.

A coyote’s social unit consists of the adult pair and their young; they may be encountered singly, in pairs, or in groups of three or more. Mated pairs maintain territories which are scent-marked and defended against other coyotes as well as foxes.

A coyote's sense of hearing, sight, and smell are well developed.

Coyotes normally run as fast as 25 to 30 miles an hour, but can run 35 to 40 miles an hour when pursued. They are also strong swimmers.

As coyotes have become more common, public concerns about coyotes attacking pets and people, especially children, have increased. Although some coyotes may exhibit bold behavior near people, the risk of a coyote attacking a person is extremely low. This risk can increase if coyotes are intentionally fed and then learn to associate people with food.

Coyotes will attack and kill pets, especially cats and small dogs (less than 25 pounds). The best way to protect pets is to not allow them to run free. Cats should be kept indoors, particularly at night, and small dogs should be on a leash and under close supervision at all times. The installation of a kennel or coyote-proof fencing is a long-term solution for protecting pets. In addition, homeowners should eliminate other sources of attraction to coyotes including pet food left outdoors, table scraps on compost piles, and decaying fruit below fruit trees.

Coyotes will attack a variety of livestock but sheep and fowl are at greatest risk. Coyotes pose very little danger to horses and cattle. The probability of a coyote attack can be reduced by penning susceptible livestock and poultry at night. Some fences effectively exclude coyotes but require careful maintenance. Guard dogs have been used successfully to reduce coyote depredation. The removal and proper disposal of dead poultry or livestock is highly recommended as a preventive measure. Carrion left in the open may attract coyotes and bring them into close and more frequent contact with live animals. Livestock owners may use trapping or shooting to remove coyotes that have attacked their animal stock.

Coyotes seen near homes or in residential areas rarely threaten human safety. Coyotes are abundant across North America, yet only a very small number of attacks on humans have ever been reported. Like many animals, coyotes can grow accustomed to buildings and human activity.

NEVER feed coyotes! DO NOT place food out for any mammals. Homeowners should eliminate any food sources that may be attractive to coyotes. Clean up bird seed below feeders, pet foods, and fallen fruit. Secure garbage and compost in animal-proof containers.

You can attempt to frighten away coyotes by making loud noises (shouting, air horn, or banging pots and pans) and acting aggressively (e.g., waving your arms, throwing sticks, spraying with a garden hose). Homeowners should realize that if they live near suitable habitat, fencing may be the only method to completely eliminate coyotes from travelling near homes. In rare cases, efforts to remove coyotes may be justified.

Coyotes are most active at night but may be active during daylight hours, particularly during the young-rearing period and longer days of summer. Daytime activity alone is not indicative of rabies. Coyotes appear to have low susceptibility to the “raccoon” or mid-Atlantic strain of rabies found in Connecticut. Coyotes are susceptible to strains of rabies that occur elsewhere in North America and to the other common canine diseases, such as canine distemper. Sarcoptic mange, a parasitic disease, can affect large numbers of coyotes, particularly when the population is dense and the chance of transmission is high. In Connecticut, many are also killed on roadways by automobiles.

It is legal to trap and hunt coyotes in Connecticut. Hunters and trappers are required to follow strict laws and regulations. Hunters and trappers are required to report and tag coyote pelts before they are sold, tanned, or mounted. There are special provisions for using land sets to trap coyotes on private land from December 1 through January 31. For more information on coyote hunting and trapping seasons, consult the Connecticut Hunting and Trapping Guide.

The Technical Assistance Informational Series is 75 percent funded by Federal Aid to Wildlife Restoration - Pittman-Robertson (P-R) Program. The P-R Program provides funding through an excise tax on the sale of sporting firearms, ammunition, and archery equipment. The remaining 25 percent of the funding is matched by the Connecticut Wildlife Division. (rev. 2/2009)