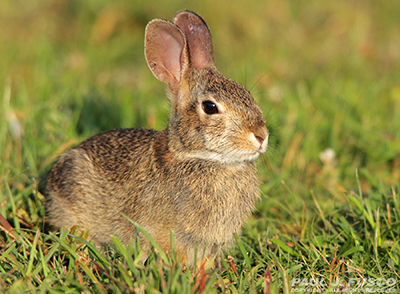 DEEP has been conducting research on New England and eastern cottontails since 2000. Studies were implemented to determine the distribution of each species, evaluate survival and causes of mortality, estimate home range size, and assess potential competition between the two species. The DEEP Wildlife Division also has assisted in the development of a captive breeding program designed to propagate New England cottontails in captivity for release in states throughout their range to augment or expand existing populations. Habitat enhancement projects have been implemented on Connecticut state forests, wildlife management areas, as well as private lands to expand existing populations of New England cottontails.

Description: Both species of cottontail rabbit are somewhat stocky, with large hind feet, long ears, and a short, fluffy tail that resembles a cotton ball. The long, coarse coat varies in color from reddish-brown to grayish-brown, and the underparts are white. The New England cottontail weighs between 1.6 and 2.9 pounds, measures from 14.2 to 18.8 inches, and is slightly smaller on average than the eastern cottontail. The eastern cottontail weighs between 1.8 and 2.9 pounds and measures from 14.8 to 18 inches.

New England and eastern cottontails are almost identical in appearance, except for a slight variation in color. About half of the eastern cottontail population shows a white, star-like shape on the forehead, while New England cottontails do not exhibit this trait. A comparison of skull characteristics or DNA analysis are the most reliable ways to distinguish between the two species.

In spring and summer, New England and eastern cottontails feed almost entirely on tender grasses, leaves, and herbs. Cottontails, and eastern cottontails in particular, may also feed on crops, such as peas, beans, and lettuce. In winter, bark, twigs, and buds of shrubs and young trees are eaten. Rabbits will also re-ingest their own fecal pellets, increasing their level of vitamins and minerals.

Life History: Breeding occurs from March through early fall. Females do not dig their own nest burrows but rather scratch out a slight depression in the ground in an area of dense grass for concealment. The nest is lined with fur and dry grass. The gestation period is about 28 days. Cottontails usually have 2 to 4 litters per year with about 3 to 8 young per litter. Young rabbits are born blind, naked, and helpless but grow rapidly, leaving the nest after only 2 to 3 weeks. They are weaned and totally independent at 4 to 5 weeks. On average, 15% of the young will survive their first year. Adults are usually solitary by nature, except when a female is caring for its young.

Interesting Facts: Cottontail rabbits are active all year long, foraging mainly at dusk or night. During the day, they remain concealed in dense brush, protected from predators and harsh weather. In times of extreme weather conditions or to escape predators, rabbits will readily use an abandoned woodchuck burrow, stone walls, brush piles, or other structures for protection. A rabbit’s home range varies greatly with the quality of habitat, but generally averages 9 acres. Males have larger home ranges than females.

Cottontails have keen eyesight and hearing. When danger is sensed, a rabbit will usually freeze in place until danger has passed, but it will flush readily if approached too closely. Rabbits normally move slowly in short hops or jumps, but when frightened they can achieve speeds up to 18 miles per hour over a short distance. They often zig-zag to confuse a pursuing predator. Although they do not take to the water often, rabbits are good swimmers.

Rabbits will thump the ground with their hind feet regularly, probably as a means of communication. When playing, breeding, or fighting, they often make low purring, growling, or grunting sounds. If captured by a predator, the animal may produce a loud, shrill scream.
Because of its high productivity rate, the cottontail rabbit is an important link in the food chain and a principal prey item for many species. Depending on its availability, the cottontail can be considered a buffer prey species, meaning if rabbit numbers are high, predators will concentrate on them, thus reducing the pressure on other prey species.

The cottontail rabbit is a popular game species throughout its range. The regular hunting season in Connecticut occurs from fall into winter. Consult the current Connecticut Hunting and Trapping Guide for specific season dates and information. The guide is available at town halls, DEEP offices, and on the DEEP website. 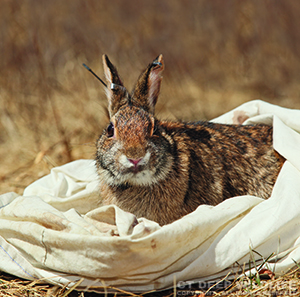 In 2006, the U.S. Fish and Wildlife Service (USFWS) designated the New England cottontail as a candidate for threatened or endangered status due to the severe population decline and widespread habitat loss experienced since the 1960s. The species' range had been reduced by about 86%, with only 5 smaller populations remaining across New England and eastern New York. A Conservation Strategy for the New England cottontail was developed and continues to be implemented, and in 2015 it was determined that the species would not be given threatened or endangered status.

Historically, New England cottontails were distributed statewide in Connecticut, but limited research over the past 50 years indicated that populations have declined in abundance and distribution in both the state and throughout New England. Biologists believe the reduced extent of young forest and shrubland habitat is the primary reason for the decline in numbers and range of New England cottontails. Prior to European settlement, New England cottontails were probably found in coastal shrublands and along river valleys where floods and beavers created the disturbances needed to generate their preferred habitat. Insect outbreaks, hurricanes, ice storms, and wild fires also created disturbances in the forest that resulted in regrowth of dense young forest (thicket). During colonial times, much of the New England forest was cleared for agriculture and then subsequently abandoned beginning in the early 1900s; this abandoned farmland allowed for a great deal of young forest and shrubland habitat to develop. However, much of these habitats continue to age into mature forest while others have been replaced with commercial or residential developments and are no longer suitable for New England cottontails.

In 2009, state and federal biologists began a coordinated conservation effort to reverse the decline in New England cottontail numbers and habitat throughout New England and parts of New York. This New England Cottontail Initiative (www.newenglandcottontail.org) included the development of a range-wide science-based conservation strategy with targeted objectives and performance measures. Great strides have been achieved in making the strategy a success. Habitat restoration on public and private lands plays a critical role in increasing and connecting young forest habitat. While state and federal agencies have focused on creating young forest patches on public lands, the U.S. Department of Agriculture’s Natural Resources Conservation Service has planned and funded more than 5,000 acres of habitat enhancement projects on private lands.

Additionally, captive rearing and release of New England cottontails augments existing wild populations and helps establish new populations within the species’ former range. Captive-bred animals released on a Narragansett Bay island in Rhode Island are now reproducing, and these rabbits are currently being used as a source for establishing new populations.

In 2015, it was estimated that New England cottontails in priority focus areas numbered more than 10,000, bringing the recovery effort three-quarters of the way toward its 2030 goal of 13,500 cottontails in healthy, young forest landscapes.

In Connecticut, research into New England cottontail distribution had begun as early as October 2000, and the state has been engaged in all facets of the Regional New England Cottontail Initiative since its 2009 inception. To date, hundreds of acres of habitat on Connecticut’s public and private lands have been enhanced in patches ranging from 6 to 100 acres in size. These projects benefit not only the New England cottontail, but more than 50 species of greatest conservation need that depend on young forest habitat.

This high-level collaboration between state and federal natural resource agencies, non-governmental organizations, land trusts, and private landowners has set a new standard for wildlife conservation. In September 2015, the USFWS announced that, due to this unprecedented cooperative effort uniting foresters, farmers, birdwatchers, biologists, hunters, and other conservationists, protection under the federal Endangered Species Act was no longer warranted and the New England cottontail would not be listed. This partnership also has initiated conservation efforts that will continue to benefit the rabbit into the future. Although the success of efforts to date are being celebrated, work will continue for many years to ensure the long-term stability of the New England cottontail.

Connecticut has been engaged in all facets of the New England Cottontail Regional Initiative since its inception in 2009. The collaboration between state and federal natural resource agencies, non-governmental organizations, land trusts, and private landowners has set a new standard for wildlife conservation. To date, habitat on approximately 700 acres of public land and 600 acres of private land have been enhanced in patches ranging from six to 100 acres in size. These projects benefit not only the New England cottontail, but also 47 other high priority species that are dependent upon young forest habitat identified in Connecticut’s Wildlife Action Plan. Although we are celebrating the success of our efforts to date, work will continue for many years to ensure the long-term stability of the New England cottontail. (Learn about Connecticut's Young Forest Habitat Initiative.) 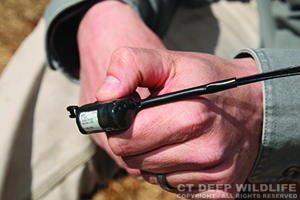 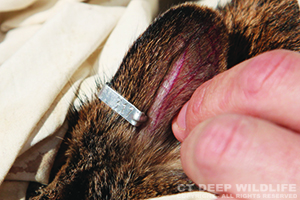 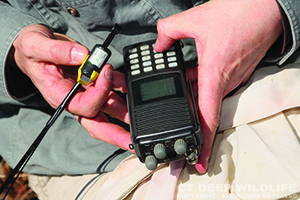 The U.S. Fish and Wildlife Service provided some of the information used to compile this webpage.

The Technical Assistance Informational Series is 75% funded by Federal Aid to Wildlife Restoration - Pittman-Robertson (P-R) Program. The P-R Program provides funding through an excise tax on the sale of sporting firearms, ammunition, and archery equipment. The remaining 25% of the funding is matched by the Connecticut Wildlife Division.