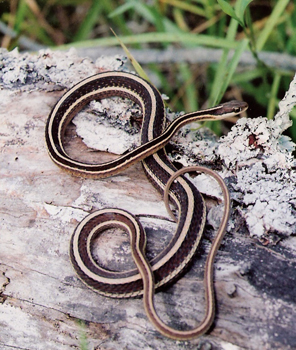 Background and Range: The slimmest and thinnest member of the Thamnophis genus (gartersnake group), the common ribbonsnake is less common than its relative, the common gartersnake. It is a species of special concern in Connecticut due to declining numbers and the loss and degradation of its wetland habitats.

Range: The common ribbonsnake occurs in southern New England down the Atlantic Coast to mid-Georgia, west to Mississippi, and a short range up the river valley into lower Indiana. The species is uncommon or localized in southern New England, where it appears to have declined or become extirpated in many areas. In Connecticut, the ribbonsnake has been documented throughout the state in wetland habitats, except in Fairfield County. Some of the largest concentrations of ribbonsnakes have been found in the Central Connecticut Lowland, in and near wetlands associated with basalt (trap rock) ridges.

Description: The small (typically 20-32 inches), slender, and striped ribbonsnake is most commonly confused with its relative, the common gartersnake. The ribbonsnake is boldly patterned with three yellow stripes on a reddish-brown to black background. A distinct dark band separates each side stripe from the belly. One stripe is centered on the body, while the other 2 stripes run down scale rows 3 and 4. The ribbonsnake also has keeled scales (a raised ridge is found along each scale) and a belly that is pale yellow to pale green. The tail generally accounts for one third or more of the ribbonsnake's total body length. The common ribbon snake also has two distinct parietal “spots” atop its head, which is unique to ribbonsnakes. The head is distinctly bicolored with the top portion black and the area below the eyes and under the chin pure white. Juvenile ribbonsnakes resemble adults.

In comparison, is the similar-looking gartersnake is more heavy-bodied; has a proportionately shorter tail (less than one fourth its total length); is less swift and agile; and has lateral stripes on scale rows 2 and 3. It also can be more variable in coloration and more blotched or patterned. Some individuals have well-defined striping and head markings; however, the majority have poorly defined patterns when compared to ribbonsnakes. Gartersnakes are found in a wide variety of habitats, from dry to wet, whereas ribbonsnakes are usually found in and near shallow water.

Habitat and Diet: The ribbonsnake seldom ventures from shallow aquatic habitats, and favors open, grassy, or shrubby areas bordering ponds, streams, and wooded swamps. It may also be found in wet woodlands. Winter dens are underground, usually at higher in elevations and sometimes near trap rock systems.

This snake feeds on a variety of aquatic creatures, mainly amphibians such as frogs, toads, salamanders, and tadpoles. It also will consume small fish and some invertebrates. In turn, this snake is preyed upon by birds, mammals, fish, and large amphibians.

Life History: Ribbonsnakes are active from April through October, and generally mate in spring (April to May) after emerging from their winter dens. Mating also can take place in autumn. Females give birth to 10-12 live young in July or August. The young receive no parental care after birth. Sexual maturity is reached at 3 years of age.

Interesting Facts: Ribbonsnakes, like their relatives the gartersnakes, are more tolerant of cooler temperatures than other snake species. Both are Connecticut's earliest emerging snakes in spring. Ribbonsnakes tend to be most active during spring, but may become dormant in summer if their wetland habitat dries up. If habitat conditions improve, the snakes will become active again. This snake may be an indicator of high quality wetlands.

Comfortable both in and out of water, the ribbonsnake is an adept swimmer that prefers shallow water. Instead of diving to the bottom as a watersnake would, it swims rapidly along the shore and may disappear quickly into vegetation if threatened. In defense, a ribbonsnake may flatten its head, thrash about, and secrete a fowl-smelling musk to deter predators. This snake may often been seen basking on logs, hummocks, or muskrat lodges.

The common ribbonsnake is non-venomous and harmless to humans. It is an important predator in aquatic food webs.

Conservation Concerns: Populations of common ribbonsnakes are sporadic in abundance, leading to a general scarcity. Some sites may have large numbers of snakes while others have only a few individuals. Population declines appear to occur where there is reforestation of open, grassy areas. Populations also can fluctuate with the availability of prey (amphibians). The occurrence of ribbonsnakes in protected areas, such as state forests, wildlife management areas, powerline rights-of-way, and watershed properties should be taken into account when managing these sites.

Snakes and People: Take the time to learn about, understand, and respect this vitally important reptile, and share your knowledge with others. If you encounter a ribbonsnake, observe it from a distance and allow it to go on its way. All snakes will retreat from humans if given a chance. You should not try to agitate it by getting too close or handling it. Although docile, it may try to bite. Never try to collect a ribbonsnake as a pet. Not only is this illegal, but this snake does not survive well in captivity.

Do NOT attempt to kill any ribbonsnakes under any circumstances as this is an illegal action. Ribbonsnakes are protected by Connecticut's Endangered Species Act and persons who kill or collect this special concern snake could be faced with fines or legal action. If you see or know of any suspicious or neglectful activity directed towards these snakes, you can report violators to the DEEP at the 24-hour, toll-free TIP hotline (800-842-HELP) or DEEP Dispatch at 860-424-3333.

If ribbonsnakes are found in wetland habitat on your property, consider appropriate wetlands management protocols. Positive identifications of common ribbonsnakes can be reported to deep.wildlife@ct.gov. If you encounter a snake problem, assistance and more information about snakes can be found by visiting the Snakes in Connecticut webpage or calling the DEEP Wildlife Division at 860-424-3011.