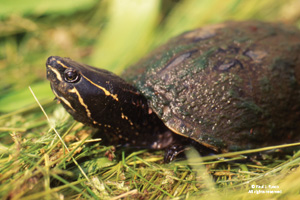 Background: Both the scientific and common names of the musk turtle, also known as stinkpot, pay heed to the odor produced when this turtle is captured or disturbed. The musk of this turtle and its relatives in the Kinosternidae family comes from a yellow fluid produced by two pairs of glands beneath the margin of the carapace (top shell).

Within Connecticut, musk turtles are found in low elevation areas, especially in the Housatonic and Thames River drainages. They are less widespread in north central Connecticut, with very localized populations.

Range: Musk turtles occur throughout much of the eastern United States. They may be found from southern Maine and New Hampshire westward through Vermont into southern Ontario. The range continues south all the way to Florida and spreads west to southern Wisconsin, eastern Iowa, southeastern Kansas, and eastern Oklahoma and Texas.

Description: This small turtle, which measures 3 to 5 inches, has a tan, brown, gray, or black carapace that may bear dark flecks, a central longitudinal keel, and a thick coating of algae. Though variable, the carapace is usually smooth, oval, and steeply domed. Musk turtle hatchlings are dark in color and have a rough carapace with a prominent or possibly multiple keels. Like the snapping turtle, the musk turtle’s plastron (bottom shell) is highly reduced. A good amount of the turtle’s flesh is exposed around the limb and tail joints. The color of the plastron is often similar to that of the carapace and there may be a dark coloration on the scutes (shell segments) with a light ivory color in between the scutes.

The musk turtle’s head is distinct from the heads of Connecticut’s other turtles in that it is triangular in shape and large when compared to body size. A pair of yellow lines runs along each side of the head from the nostrils to over and under the eyes. These lines may become broken or fade completely with age. A set of short barbels (soft barb-like projections) can be found on the chin and another set on the throat. The musk turtle's feet are heavily webbed and clawed.

Several characteristics can be used to distinguish males from females: 1) males have patches of rough scales on the inside of the hind legs that are used to grasp the female’s carapace during mating; 2) more skin is in between the seams of the scutes on the male’s plastron; 3) the tails of males are longer, thicker, and equipped with a spike at the tip; and 4) males have larger heads than females.

Habitat and Diet: The most common habitat types for this highly aquatic turtle are rivers, streams, and reservoirs associated with river systems (including impoundments). Shallow, slow-moving streams and rivers with muddy bottoms and dense aquatic vegetation are preferred. Unlike most other turtle species, the musk turtle actually benefits slightly from dam construction because this creates the slow-moving, muddy water habitats in which these creatures thrive. Musk turtles are less commonly found in ponds and lakes, but may be found more in those associated with fluvial (river or stream) systems.

Life History: One beneficial aspect of the musk turtle’s biology is that it reaches sexual maturity in a relatively short amount of time compared to the Connecticut state-listed wood turtle (special concern), box turtle (special concern), and bog turtle (endangered). These imperiled species often take well over a decade before they can reproduce. Male musk turtles usually mature in only 3 years, while females take from 4 to 7 years.

Mating occurs underwater with the male on top of the female. This generally takes place from April through early May, but has been reported during September and October as well. Female musk turtles will leave the water to nest up to 3 times during May to June. Nest cavities are dug near the water’s edge, often under a log, tree stump, or leaf litter. Approximately 5 to 8 eggs are laid in the cavity and covered up. Hatchlings emerge in September and October.

Interesting Facts: When the colder weather of fall arrives and the water temperature drops below 50 degrees Fahrenheit, musk turtles head to their hibernacula beneath the mud, where they are safe from impending freezing temperatures. Following this period of winter dormancy, musk turtles become active again in spring. They can be found during the day basking in shallow water or on top of emerging rocks, logs, and angled tree trunks. These turtles are known to climb high up into the branches of shrubs and trees.

Musk turtles are often found walking along the bottom of a waterbody rather than swimming. They also camouflage themselves by burrowing slightly into the muck. The algae frequently found growing on their shells help the animals blend in among the plants and similar-looking algae-covered stones.

A largely nocturnal species, activity increases as the sun sets and continues into the night. The barbels on this turtle’s chin and throat are sensory organs which allow the turtle to feel for prey resting on the bottom of the waterbody.

Musk turtles are rarely found on land, typically leaving the water or their elevated basking perches only to nest or find new aquatic habitats. They also are gregarious animals and are usually found together in numbers.

The life expectancy of the musk turtle is 40 to 60 years of age.

The musk turtle is the only representative of the turtle family Kinosternidae found in Connecticut. This New World family also includes mud turtles and other species of musk turtle.