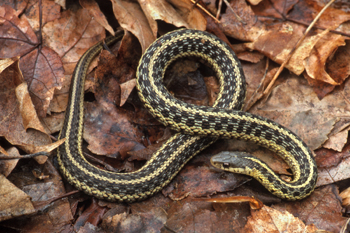 Background and Range: The common gartersnake is perhaps the most common, widely distributed, and familiar of all North American snakes. There are many species, subspecies, and races of gartersnakes comprising the genus Thamnophis. In Connecticut, the gartersnake is found throughout the state, from sea level to the highest elevations, and from urban areas to "wilderness."

The closely related common ribbonsnake resembles the gartersnake in appearance and habits. However, the ribbonsnake is less common in the state and is listed as a species of special concern.

In North America, the common gartersnake is found from Maine to central Missouri and from central Ontario to Florida.

Description: The gartersnake is marked with a pattern of three light stripes on a dark body, although the pattern can vary. One narrow stripe runs down the center of the snake's back, with a broad stripe on each side. The stripes are usually yellow, but can be shades of blue, green, or brown. Between the center and each side stripe are 2 rows of alternating black spots. The scales of the gartersnake are keeled (a raised ridge is found along each scale) and the belly is yellow and pale green. Adults range in size between 18 and 26 inches in length, but can measure up to 42 inches long. Juvenile garter snakes resemble adults.

It is difficult to distinguish between the similar-looking gartersnake and ribbonsnake in the field. In comparison, the gartersnake is more heavy-bodied than the ribbonsnake; has a proportionately shorter tail (less than one fourth its total length); is less swift and agile; and has lateral stripes on scale rows 2 and 3. The gartersnake also can be more variably colored and more blotched or patterned. Some individuals have well-defined striping and head markings; however, the majority have poorly defined patterns when compared to ribbonsnakes. Gartersnakes are found in a wide variety of habitats, from dry to wet, whereas ribbonsnakes are usually found in and near shallow water.

Habitat and Diet: The gartersnake's success is due to its opportunistic nature to both habitat use and food habits. The snake uses a variety of habitats, such as deciduous forests; forest edges; fields; swamps; bogs; stream, river, and pond edges; hedgerows; overgrown lawns; and grassy areas. Snakes are often seen basking on wood piles, stone walls, hedges, and rocks.

Gartersnakes feed on a variety of small animals. Amphibians (frogs, toads, salamanders) are the main prey, followed by earthworms, mice, small fish, nestling birds, small snakes, leeches, slugs, snails, sowbugs, crayfish, millipedes, insects, and spiders. The saliva of the common gartersnake appears to be toxic to amphibians and other small animals and a bite may produce swelling or a rash in some people. Feeding usually occurs during daylight hours, but gartersnakes will also hunt for food in the mornings or evenings (crepuscular) and at night in hotter months and during the amphibian breeding period. This snake eats its prey alive and whole.

Life History: Common gartersnakes mate upon emerging from their winter dens in March or April. It is common to observe a group of gartersnakes wrapped into a "breeding ball," which usually consists of males with a small number of females. Males are polygamous, meaning they will mate with more than one female. Gartersnakes are also viviparous – they do not lay eggs. Instead, the young develop within the female in a thin sac-like membrane that contains a yolk. Gestation lasts between 90 and 100 days, with young emerging from the female anytime between July and October. The size and number of young depend on the age, size, and condition of the female. A typical litter ranges from 10 to 40 individuals. The young receive no parental care and disperse immediately upon birth.

An advantage of being viviparous is that there is no predation of eggs. Another advantage is that the young develop faster because they are warmer inside the female's body. Pregnant female snakes, through behavior (i.e., moving to warmer locations, basking in the sun, etc.), can raise their body temperature. This adaptation probably contributes to the gartersnake's existence in colder, northern areas.

Common gartersnakes do not reproduce until two years of age, and they can live up to 10 years.

Interesting Facts: The gartersnake derives its name from the resemblance of their stripes to old-fashioned sock garters.

This snake is extremely cold resistant. It is active earlier in spring and later in fall than other snakes. Activity is closely associated with weather conditions. Snakes are cold blooded and derive heat from outside the body; environmental conditions must be warm enough – between 68 and 98.6 degrees Fahrenheit – for the snake to adjust its body temperature to a preferred range and to become active. As winter approaches and temperatures drop to the minimum common gartersnakes can tolerate, they will begin to group together to brumate for the season. Unlike hibernation when animals are asleep, brumating animals are awake but inactive. The grouping of snakes during winter is referred to as an aggregation. Winter den sites include muskrat and crayfish burrows, mud banks, rock walls, the area under stumps and logs, and burrows in soft earth.

Snakes and People: Gartersnakes are harmless to people and are NOT venomous. They do not constitute a nuisance or impact humans or human activity. However, they are often encountered in yards and around outbuildings. Like most other snake species, the gartersnake is shy and non-aggressive. If you unexpectedly encounter one when gardening or doing other yard work, the snake is likely as startled as you are. If you encounter a snake in your yard or while enjoying the outdoors, observe and enjoy it from a distance, and allow it to go on its way. Gartersnakes, or any other wild snake, should NEVER be collected as a pet, and the killing of any snake is strongly discouraged. All snakes will retreat from humans if given a chance. Killing a gartersnake should be avoided because 1) there is no reason to kill a gartersnake, and 2) it is difficult to distinguish gartersnakes from ribbonsnakes (even for experts). Misidentification may result in the unnecessary death of a ribbonsnake, which is a species of special concern in Connecticut.

Occasionally gartersnakes will enter homes and outbuildings in search of food. If a gartersnake is found in the home, it can easily and safely be removed. A pair of garden gloves is sufficient protection from gartersnake bites. The snakes have long teeth for their size; a bite on an unprotected hand is not dangerous but can be painful. The snake should be picked up carefully to avoid excessive squeezing. Snakes have delicate bodies and are easily injured. Place the snake in a cloth bag and release it in an area not far from the point of capture so the snake will be in familiar territory. To discourage snakes from entering buildings, make sure all cracks in the foundation are sealed. Basement windows should close tight or be covered with screens. Gartersnakes do not require large openings to gain entrance.

If you wish to discourage snakes from your yard, remove the places where they can hide. Keep grass cut short, remove brush and rock piles, and keep shrubs trimmed up off the ground. These methods will discourage snake prey species from the yard as well. If you encounter a snake problem, assistance and more information about snakes can be found by visiting the Snakes in Connecticut webpage or calling the DEEP Wildlife Division at 860-424-3011.