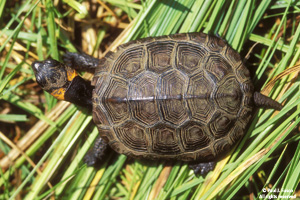 Background: The state endangered bog turtle is the rarest turtle in Connecticut. Only small, isolated populations exist in the state and information on them is scant. Populations have been documented in 5 Connecticut towns, and unconfirmed sightings and single specimens have been reported from several other towns between the Housatonic and Connecticut Rivers. Illegal collection for the pet trade has further depleted local populations.

The bog turtle was given protection in 1973 by CITES, the Convention on International Trade in Endangered Species. The turtle was added to the federal endangered species list on November 4, 1997. In Connecticut, it is illegal to remove any bog turtle, including eggs, from the wild.

Intensive development pressure in all portions of the bog turtle’s range has caused the draining and filling of wetland habitat. Remaining wetlands have been isolated, resulting in the fragmentation of bog turtle populations. These small populations are unable to mix with each other and only breed within themselves. The result is a loss of genetic variation, which reduces the population’s ability to adapt to a changing environment. Bog turtles are extremely sensitive to changes in their environment, such as increased nutrification, altered drainage, vegetation changes, or pollution.

Description: The bog turtle is the smallest of the turtles found in Connecticut, measuring from 3 to 3.5 inches and weighing approximately 4 ounces. It has an orange or yellow head patch which is sometimes divided into 2 parts. The large scutes (shell segments) of the dark carapace (upper shell) have yellow or reddish hues. Males have a flatter carapace, concave plastron (bottom shell), and a long, thick tail. Females have a wider carapace, convex plastron, and a short, thin tail.

Habitat and Diet: Suitable bog turtle habitat consists of calcareous (containing calcium carbonate, calcium, or lime) wetlands, such as open sphagnum bogs, wet meadows and wet pastures. In Connecticut, these special habitats only occur in the western part of the state. Bog turtles rely on an abundance of grassy or mossy cover and high humidity. Open, sunny areas where the turtles can bask to raise their body temperature also are important.

Life History: Bog turtles breed in late April to early June after emerging from hibernation. Nests are usually in tussocks or on sphagnum moss in sunny areas of a bog. The 2 to 5 (usually 2-3) eggs are laid from June to July and are left on their own to develop and hatch. Incubation lasts for 7 to 8 weeks and hatching occurs from July to early September. In Connecticut, eggs may overwinter in the nest and hatch in spring when there is an abundant food supply. The nests are often preyed on by skunks and raccoons. The young are only 1 inch long at hatching and are often taken by a variety of birds and mammals.

Bog turtles reach sexual maturity between 9 and 15 years of age.

Interesting Facts: During winter, bog turtles hibernate underwater in deep areas of bogs in about 6 to 18 inches of mud. Immature turtles do not hibernate in deep mud until they are 2 to 3 years old. The turtles emerge from hibernation in late March through April and may migrate short distances to feeding and breeding sites.

Bog turtles feed during the daylight hours; however, they are seldom active during the hottest part of the day and are inactive on chilly mornings.

Adult turtles are preyed on by raccoons, skunks, foxes, and dogs.

Although specifically unknown, the maximum life expectancy for bog turtles is estimated at around 40 years of age.

Bog turtles rely on an abundance of grassy or mossy cover and high humidity. Open, sunny areas where the turtles can bask to raise their body temperature are also important. The turtles feed during the daylight hours; however, they are seldom active during the hottest part of the day and are inactive on chilly mornings. Adult turtles are preyed on by raccoons, skunks, foxes and dogs.

What You Can Do: According to Connecticut regulations, bog turtles may not be collected from the wild. They also should NEVER be kept as pets. The illegal capture of bog turtles has been encouraged by the pet trade in many areas of the country and can only be effectively stopped by reducing the demand for bog turtles as pets.

You can help bog turtles by not disturbing or damaging their bog habitats.

The production of this Endangered and Threatened Species Fact Sheet Series is made possible by donations to the Endangered Species-Wildlife Income Tax Checkoff Fund.
(rev. 3/2011)