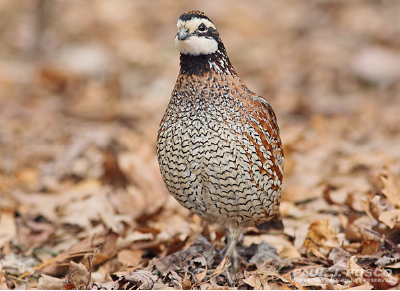 Background: Colonial records indicate that northern bobwhites were present in southern New England 300 years ago, along with other upland game bird natives, including ruffed grouse, wild turkeys, and heath hens. Bobwhite populations probably expanded as southern New England was cleared for agriculture. During the 1800s, when agriculture was at its peak, bobwhites were found throughout most of Connecticut. Since that time, the state’s major habitat types have changed. What was once agricultural/early successional habitat with a large percentage of young forests and thickets has become a generally maturing forest. This change has been detrimental to the northern bobwhite population. Attempts were made to help mitigate the bobwhite decline in the early 1900s as game managers built winter shelters and feeding stations for the birds. In addition, bobwhites from southern latitudes were introduced to new areas. However, these restoration efforts were not successful because the progeny lacked the vigor of the hardier northern stock.

Today, a variety of bird surveys indicates that native Connecticut bobwhite populations have probably been extirpated. Most recent quail observations are attributed to the release of pen-raised quail for the purpose of dog training and/or hunting.

Range: The northern bobwhite population ranges from the central and eastern United States from Minnesota and Massachusetts south to Florida and the Gulf Coast. The species is also found in Wyoming and southern Ontario, Mexico, parts of Central America, and Cuba.

Description: The bobwhite belongs to the order Galliformes, which are birds described as chicken-like with feet adapted for scratching. Measuring eight to 10 inches in length, this small relative of the wild turkey is the only native quail species that occurred in Connecticut. The bobwhite is chunky with a short black bill, legs, and tail. It has reddish brown plumage on its back and a pale underside with intricately detailed dark streaking on the flanks and barring on the breast and belly. Males have a bold white throat and white eyebrow line. In the hen, these markings are buff-colored.

Habitat and Diet: Bobwhites require a mix of habitat components that include open, early successional land with short dense grass, dead grass stems, patches of open ground, and some woody or brushy vegetation for cover. These components are found in overgrown fields, farmland with fence rows, old pastures, and brushy power line cuts. The grass habitat is usually the limiting factor for bobwhite because it is often mowed or converted to cropland. Additionally, all of the habitat types need to be within a quarter of a mile of each other. Bobwhites are not found in maturing forests.

The diet consists mostly of seeds, hard and soft mast, leafy greens and buds, and arthropods, depending on the time of year and availability. When available, flies, bees, beetles, and spiders are consumed. Mosquitoes have also been known to make up a portion of the bobwhite diet. Growing chicks depend on insect protein for rapid gains in size and strength.

Life History: Bobwhites are gregarious in nature throughout most of the year, forming coveys composed of broods raised in neighboring territories. Coveys usually are made up of about 30 birds, often roosting shoulder to shoulder in order to keep warm during the winter months. If disturbed, a covey may "explode" into flight. These coveys remain quite stable, and regroup after being flushed.

Coveys hold together from when they are first formed in late summer until spring, just prior to the start of the mating season. It is at this time that males begin to announce their territories with the familiar "bob-white" whistle.

The bobwhite is a ground-nester, with nesting activities usually underway in Connecticut by mid- to late April. Nests are normally found in fairly open areas. An average of 12 to 15 creamy white eggs are deposited and incubated for 23 to 24 days. Both males and females play a role in nesting and brood rearing.

Approximately one-third of all nests started are successful. If nests are destroyed prior to hatching, the hens will usually renest. Nest destruction or desertion can be caused by natural disasters (floods, fires, etc.) or disturbance by humans, dogs, house cats, or other predators. Of the chicks that hatch, less than one-third survive their first year. Predators of bobwhites include foxes, owls, hawks, domestic cats, and dogs.

Interesting Facts: The bobwhite is commonly referred to as the "King of Native American Game Birds". In some southern states, the bobwhite is still the most important game bird. In Connecticut, quail hunting is limited to pen-raised birds. The bobwhite's rapid, erratic flight, together with its small size, make it a challenge for the upland game bird hunter. As table fare, the bobwhite is among the top of all game birds.