Report Bobcat Sightings as part of the Bobcat Study.

View a map of current sightings of bobcats in Connecticut. 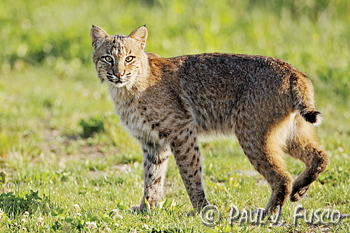 Background: The bobcat is the only wild cat found in Connecticut and the most common wild cat in North America. Its status has changed dramatically in our state. Historically, bobcats were not protected in Connecticut and were viewed as a threat to agriculture and game species. The state even had a bounty on bobcats from 1935-1971. By the early 1970s, a large increase in the value of bobcat pelts raised concerns that the population could be overharvested. In addition, deforestation of the state’s landscape that peaked in the 1800s greatly reduced habitat for bobcats and many other wildlife species. In 1972, the bobcat was reclassified as a protected furbearer in Connecticut with no hunting or trapping seasons.

Based on observation reports submitted to the Wildlife Division by the public and others, bobcat numbers appear to have increased in Connecticut in recent years. Sighting and vehicle-kill reports indicate that bobcats now reside in all eight Connecticut counties. However, the heaviest concentrations occur in the northwestern corner of the state.

Range: The bobcat’s range has historically extended throughout the lower 48 United States into southern Canada and south to central Mexico. This range has remained largely intact due to the species’ adaptability to various habitats and human pressures. However, the bobcat has been extirpated from some areas along the mid-Atlantic coast due to overharvest and dense human population and development. Bobcats also are no longer found in those portions of the Midwestern states where intense agriculture has decreased suitable habitat. Bobcat populations are found throughout New England.

Bobcats are about two to three times the size of their distant relative, the domestic house cat, and the tracks of a young bobcat are often confused with those left by a roaming house cat. Adult house cat tracks, however, are much smaller than adult bobcat tracks. Bobcat tracks have an overall round appearance with four round toe pads in both front and rear prints. There is a fifth toe on the forefoot; however, it does not leave an impression because it is raised high on the foot. The claws do not leave an impression because they are usually retracted. 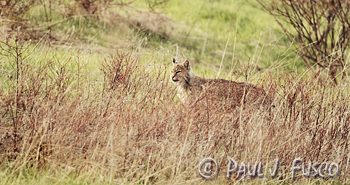 Habitat and Diet: Bobcats can be found in hardwood (deciduous) forests and mixed hardwood-softwood (coniferous) forests. They have a preference for brushy lowlands and swamps, as well as brushy and rocky woodlands broken by fields, old roads, and farmland. They tend not to prefer mature forest but do flourish in areas with a thick understory. Territorial and home ranges in the Northeast vary from eight to 20 square miles in size. Females tend to have smaller and more exclusive ranges than males. Daily movements of one to four miles are common.

The diet ranges from cottontail rabbits, woodchucks, squirrels, chipmunks, mice, voles, snowshoe hares, white-tailed deer, birds, and, to a much lesser extent, insects and reptiles. Deer that are taken by bobcats are most likely sick, injured, young, or very old. Bobcats also prey on domestic animals, such as poultry, small pigs, sheep, and goats.

Life History: Bobcats are polygamous (have more than one mate) and do not form lasting pair bonds. They breed between February and March. Females may breed before they are one year old but generally do not produce a litter until they are two years old. Dens are located beneath windfall or in caves, rock crevices and ledges, hollow logs, and trees. The den may be lined with dry leaves, moss, or grass, which are formed into a shallow depression by the female. The same den site may be used for several years.

One to four (usually two) kittens are born in April. Kitten survival is a major factor in annual bobcat population fluctuations; survival is linked to food abundance. When food is plentiful, many young survive; a scarcity of food results in heavy mortality to kittens. Kittens weigh 10 to 12 ounces at birth. They are born blind and their eyes remain closed for three to 11 days. Kittens nurse for about 60 days and may remain with the female until the following spring. Males do not participate in raising the young. At about four weeks of age, kittens begin to leave the den and take solid food provided by the female. Juvenile bobcats leave the female’s territory before she gives birth to a litter the following year.

Interesting Facts: Bobcats are most active just after dusk and before dawn. Secretive, solitary, and seldom observed, they tend to hunt and travel in areas of thick cover, relying on their keen eyesight and hearing for locating prey. Bobcats are patient hunters, meaning they spend much of their time either sitting or crouching, watching and listening. Once prey is located, a bobcat will stalk within range and ambush its quarry.

Bobcats may cache, or cover, their kills with leaves, grass, snow, and even hair from the carcass. They will revisit a carcass until most of it is consumed. Other feline species are known to cache their kills for future consumption.

Bobcats rarely cause conflicts with human activities. Infrequently, they kill livestock, especially fowl, and attack domestic cats. Conflicts are addressed on an individual basis and can often be remedied by preventive methods, such as fencing for livestock.

Bobcat attacks on people are extremely rare. Bobcats are not a significant vector of disease and rarely contract the mid-Atlantic strain of rabies.

What You Can Do: Visit DEEP's Bobcats in Connecticut webpage to learn about the Wildlife Division's ongoing bobcat study.

The DEEP Wildlife Division continues to record bobcat sightings and also document the number of bobcats hit and killed by vehicles on Connecticut roadways. Between 20 and 30 vehicle-killed bobcats are collected annually and examined for physical condition, age, and breeding condition.

The Technical Assistance Informational Series is 75 percent funded by Federal Aid to Wildlife Restoration - Pittman-Robertson (P-R) Program. The P-R Program provides funding through an excise tax on the sale of sporting firearms, ammunition, and archery equipment. The remaining 25 percent of the funding is matched by the Connecticut Wildlife Division. (rev. 2/20)