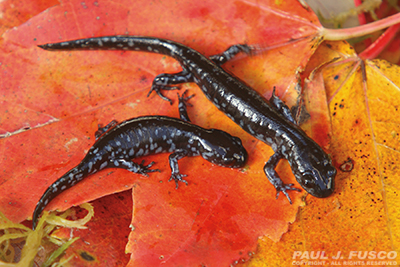 Range: Blue-spotted salamanders occur in the Canadian Maritime Provinces to northern New Jersey and from southeastern Quebec to northern Illinois and Indiana. Disjunct populations have been found on Long Island, New York.

In Connecticut, hybrids typically occur west of the Connecticut River due to overlapping populations with the Jefferson salamander. Pure diploid populations are isolated to a few locations near the Quinebaug Valley.

Description: This small to medium-sized salamander has a narrow head and dark black body with bright blue flecks. The long, laterally compressed tail makes up nearly half of the total body length, which ranges between to 5 inches. Hybrids, however, may reach longer lengths.

The blue-spotted salamander can be distinguished from the similar-looking young Jefferson salamander by its more narrow head and larger spots. At the larval stage, blue-spotteds appear nearly identical to Jeffersons. Complex hybrids can have a wider range of marks, including more gray coloration, paler blue flecks, and a wider snout, which is associated more with the Jefferson salamander.

Habitat and Diet: Typical habitat consists of red maple swamps with nearby woodlands. The soil types hosting these amphibians vary from water-saturated loam to damp sand. Breeding areas include swamps and marshes with weak water flow that are often connected to other waterbodies. Temporary pools (also known as vernal pools) and floodplains with plentiful organic debris also comprise the breeding grounds for blue-spotted salamanders.

This salamander feeds on insects, slugs, worms, and other small invertebrates.

Life History: Breeding occurs in early spring. When the first warm rains arrive on a spring night, blue-spotted salamanders migrate in large numbers to temporary woodland breeding pools. Eggs are deposited singly or sometimes in clusters underneath leaves or at the base of tussocks, usually in a scattered pattern. After the eggs hatch, the larvae remain in the pool until metamorphosis occurs. Newly transformed salamanders will emerge from the wetland and disperse into the surrounding forest.

Pure diploid populations occur in an even male-female ratio. However, complex populations are female dominated.

Courtship behaviors included rubbing, nudging, and an impressive “tail-fanning” procedure.
In predatory defense, adults will curl and “lash out” with their tail, which is covered in granular glands that secrete a noxious substance.

Conservation Concerns: Blue-spotted salamanders are protected by the Connecticut Endangered Species Act, and may not be collected or removed from the wild.

Populations are threatened by habitat loss and fragmentation, and increased urbanization. Certain populations of this salamander are being impacted by a high number of roadkills during the spring breeding season when these animals migrate in large numbers to their temporary breeding pools. Where appropriate, measures to minimize roadkills should be taken, especially where new development is planned near breeding pools. Such measures may include enlarging buffer zones around breeding pools, providing tunnels or culverts for salamanders to cross under roads, and locating new roads away from salamander migration routes.

Change in the salinity content of breeding pools, through acid rain or runoff from road salts, can affect larvae and newly transformed salamanders.

What You Can Do Aquatic breeding pools are crucial to many amphibians, including salamanders. Managing temporary pools, as well as buffer zones in the surrounding forest, is extremely important for conserving the amphibians dependent on these habitats. Avoid the use of fertilizers, herbicides, and insecticides in your yard. If you need to use these products, purchase ones that are natural and organic. Salamanders should never be collected from the wild. Awareness and education of the blue-spotted salamander's life history and habitats are invaluable tools for conserving this animal. If you locate a blue-spotted salamander population or temporary breeding pool, please contact the DEEP Wildlife Division at 860-424-3011 or deep.ctwildlife@ct.gov. Additional information about salamanders is available on the Salamanders in Connecticut webpage.