View a current map of black bear sightings in Connecticut 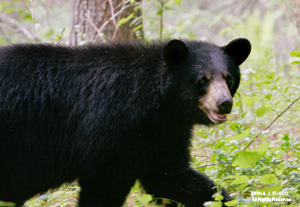 Black bears are impressive animals. Even a long-distance glimpse of one foraging in a woodland is an unforgettable experience for most outdoor enthusiasts. However, glimpsing a bear in Connecticut was once unlikely because black bears were extirpated from the state by the mid-1800s. Since then, bears have made a comeback. Their return is due, in part, to the regrowth of forestland throughout the region following the abandonment of farms during the late 1800s. Beginning in the 1980s, the DEEP Wildlife Division had evidence of a resident black bear population. Since then, annual sighting reports have increased dramatically, indicating a rapid increase in the population. With the number of bears increasing in the state, it is important for residents to learn the facts about black bears and how to coexist with them.

The black bear is a stocky animal with short, thick legs. It is the smallest North American bear. In Connecticut, adult males, or boars, normally weigh from 250 to 550 pounds, while females, or sows, weigh from 150 to 300 pounds. Yearlings weigh 45 to 100 pounds. Adults are 5 to 6 feet long.

The black bear’s coat is typically glossy black or brownish black, except for the muzzle, which is tan. There is sometimes a small, white patch on the chest, called a blaze. In western North America some black bears are brown or cinnamon. Black bears have 5 toes with large claws on all feet. Bear tracks somewhat resemble human tracks, but the front feet are shorter than the rear. A bear’s tail is short, from 3 to 5 inches long. The sexes are similar in appearance, although males are usually larger.

Black bear habitat is forestland, usually with deciduous and coniferous trees, as well as early successional habitat (fields, young forests, etc.), streams, and swamps. Bears prefer areas with thick understory vegetation and abundant food resources. Mature forests provide soft and hard mast (e.g., acorns) in late summer and fall. Wetlands are particularly important in spring when emerging plants are one of the few available foods. Connecticut has an abundance of suitable bear habitat across the state. 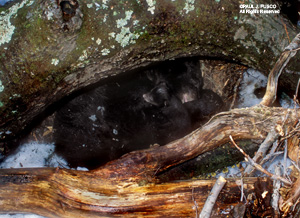 Breeding occurs during late spring and early summer. During this time, males travel extensively in search of females and may closely follow a prospective mate for extended periods, waiting for her to be receptive to him. Males pursuing females during this time may seem to behave abnormally. They may appear dazed or unresponsive to humans trying to scare them away, and may even have an unusual gait that looks like an exaggerated cowboy walk. The age when sows first produce cubs is related to the available food supply, but most begin to reproduce at age 3 or 4 and continue to have young every 2 years. While males reach sexual maturity around the same time, the older and larger males usually outcompete younger males for breeding opportunities. Bears do not form long-lasting bonds, so the males may mate with more than one female during the breeding season. Fighting may occur between rival males as well as between males and unreceptive females.

Young are born in the den in late December through early January and are blind, toothless, and covered with fine hair. Cubs weigh 6 to 12 ounces at birth, about the size of a can of soda. Litter sizes range from 1 to 5 cubs, with litters of 2 or 3 being most common in Connecticut. After giving birth, the sow usually continues her winter rest while the cubs are awake and nursing. Only females rear the young, which typically remain with the female until the second spring of their lives. Then, the young bears (yearlings), especially the males, may travel great distances in search of their own territories. Yearling females frequently settle near their mother’s home range. Young bears are often forced into less preferred habitat.

The black bear is an intelligent animal with keen senses of smell and hearing. It can detect the slightest aroma of food, which may lead the bear to campsites and near homes. Odor from carelessly stored food and garbage can lure bears long distances. Black bears can be active any time of the day. Climatic factors, such as drought, may result in a food shortage, causing bears to travel many miles in search of food.

Black bears are generally shy and secretive and usually fearful of humans. However, if they regularly find food near houses and areas of human activity, they can lose their fear of humans. Unlike grizzly bears, black bears are seldom aggressive toward humans, even when cubs are present. When confronted, a sow will usually send her cubs up a nearby tree while she stands watch beneath.

Females with cubs tend to have restricted home ranges, which average 5 to 7 square miles in Connecticut, while males move about widely in home ranges of 12 to 60 square miles. The size of a home range varies geographically and often depends on the quality of habitat. Most ranges are used by more than one bear, but specific areas are rarely used at the same time. There can be some broad overlap between male and female home ranges. In their home territories, bears may mark trees (called “bear trees”) along their travel routes by clawing and biting the bark. Black bears are good tree climbers and strong swimmers. They also can run up to 35 miles per hour.

Black bears are not classified as true hibernators but their body temperature is lowered and heart rate slowed during winter denning. Denning enables bears to overcome unfavorable weather conditions and lack of food during winter. Denning bears do not eat, drink, urinate, or defecate. However, they will usually wake up if disturbed during their winter dormancy. In Connecticut, black bears can remain active for periods throughout winter, especially if there is little snow cover and mild temperatures. Pregnant females are often the only bears that need to den to provide a protected space for their new offspring. Bears commonly den under fallen trees or in brush piles, but varied sites are used, including rocky ledges or dense mountain laurel groves. Bears may also find suitable denning conditions around human dwellings, including under decks, porches, and sheds. In Connecticut, most bears den from late November through mid-March. Females tend to remain in the den for a longer period of time than males.

As Connecticut’s bear population continues to increase, more bears, particularly young bears, will be seen near residential areas. The DEEP’s response will depend on the specifics of each bear situation. The mere presence of a bear does not necessitate its removal. In most cases, if left alone, the bear will make its way to a more natural habitat. Removing food attractants, such as bird feeders, reduces the chance that bears will go near homes. The DEEP seldom relocates bears. An exception may be made to remove a bear in an urban location when there is little likelihood that it can leave safely on its own and when the bear is in a position where it can be safely immobilized. In these rare instances, bears are released in the nearest suitable habitat, which is likely already a part of the bear’s local home range. DEEP Tranquilizing Teams, consisting of Environmental Conservation Police officers and wildlife biologists, are specially trained and equipped to immobilize wildlife. Bears cannot be relocated to another state because no other state allows it. Bears that have persistent, serious, negative behavior, such as killing protected livestock or entering buildings, may have to be euthanized.

As bears become more regular residents of Connecticut towns, it is important that people learn to adapt to the presence of bears and take measures to avoid damage and problems. If people do not take precautions, problem behavior by bears can increase, possibly leading to bears being removed or euthanized.

Much of Connecticut’s landscape is now forested and suitable for black bears. The rapid increase in the bear population between the early 2000s and today is expected to continue. As the population expands, interactions between humans and bears will increase. People should learn what to do if they see a bear and how to avoid unnecessary conflicts by keeping food away from bears.

If You See a Bear:

Bears Near your Home

In wilderness settings, bears usually avoid people. But food attractants near homes can cause them to grow habituated to humans and disturbances, such as dogs and other noises. Bears are attracted by bird feeders, garbage, outdoor pet food, compost piles, fruit trees, and berry-producing shrubs.

If you see a bear on your property you can either leave the bear alone and wait for it to leave or make loud noises from a safe distance to attempt to scare the bear away. After the bear leaves the property, remove anything that may have attracted it to the area.

Bears Seen While Hiking or Camping

Black bear attacks on humans are exceptionally rare. In most hiking areas, bears normally leave once they have sensed a human. However, at campsites and campgrounds bears can be attracted by poorly stored food and garbage. If you see a bear when hiking or camping, make your presence known by making noise and waving your arms. If you surprise a bear at close range, walk away slowly while facing the bear. Do not run. Try to stay calm as you make your retreat. Black bears will sometimes “bluff charge” to within a few feet of you when they feel threatened. If this happens, stand your ground and shout at the bear. Do not climb a tree because black bears are excellent tree climbers. Make sure your dog is on a leash and under control.

Sometimes bears are attracted to food that is prepared outside. Do not cook near your tent and do not store food inside your tent. Instead, keep your food in a vehicle or use a rope to suspend it 10 or more feet off the ground and at least 6 feet away from tree trunks. Even clothes that you have cooked in should be stored out of a bear’s reach.

Bears occasionally attack livestock and damage beehives. Beehives and livestock, including backyard poultry and rabbit hutches, should be protected with electric fencing, which has become considerably more affordable over the years. Store livestock and pet foods in airtight containers and clean up any spilled feed. Bears rarely harm cats or dogs. However, recent incidences involving uncontrolled dogs chasing bears have resulted in injuries to both the pet and owner.

Blueprint for a Black Bear

Body Characteristics: Stocky, with short, thick legs.
Color: Varies in color from black to brown; tan around the muzzle and occasionally has a white chest patch.
Locomotion: Plantigrade (walks on whole foot). Usually walks with a shuffling gait but can run at speeds of over 30 mph. Agile climber.
Senses: Exceptional hearing and smell.
Diet: Grasses, forbs, fruit, nuts, and berries. Occasionally preys on small mammals, deer (fawns), and livestock. Also seeks insects (ants, bees), scavenges carrion, and raids garbage cans and bird feeders.
Habitat: Mixed deciduous-coniferous forests with mast-producing overstories and understories, marshes, and thickets.
Social Behavior: Breeding occurs in early summer. Males may breed with several females, but are solitary in the non-breeding season. Females give birth while denned, usually in December/January. Cubs remain with the female for 1 1/2 years. Adult females breed every other year, less often in poorer habitat. Bears are most active at night. Often avoid humans but can be habituated by food sources found near homes.
Connecticut Population: Increasing and expanding. The resident population, including juveniles, is estimated to be around 1,000-1,200. The majority of the population inhabits the northwest quarter of the state but is continuing to expand into suitable habitat in eastern Connecticut.

The Technical Assistance Informational Series is 75 percent funded by Federal Aid to Wildlife Restoration - Pittman-Robertson (P-R) Program. The P-R Program provides funding through an excise tax on the sale of sporting firearms, ammunition, and archery equipment. The remaining 25 percent of the funding is matched by the Connecticut Wildlife Division. (rev. 06/2022)