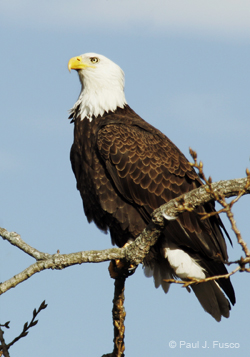 The bald eagle is best known as the national emblem of the United States of America. It was chosen for this honor in 1782 by the Second Continental Congress because the species is unique to North America. However, the bald eagle went from being common in the early 1700s to extremely rare in the lower 48 states by the 1960s. This precipitous decline was due to loss of habitat and nesting trees, food contamination by pesticides, and illegal shooting. Contamination of food by the organochlorine pesticide DDT is widely accepted as a major reason why populations of eagles, along with many other raptor species, declined in the mid-20th century. DDT accumulated in the food chain and, when contaminated food was ingested by eagles, it caused them to lay eggs with weakened shells that cracked when the birds incubated their eggs. Eagle populations across the country were decimated. General use of DDT was banned in the United States in 1972.

The bald eagle was first declared an endangered species with the passage of the federal Endangered Species Act in 1973. Populations eventually began to recover due to the ban on DDT use, successful reintroduction programs of fostered chicks and fledglings, and habitat and nest protection measures. In 1995, the U.S. Fish and Wildlife Service reclassified the bald eagle from endangered to threatened in the lower 48 states. Populations continued to recover enough that, in 2007, the bald eagle was officially removed from the federal Endangered Species List. However, bald eagles are still protected on the federal level by the Bald Eagle and Golden Eagle Protection Act of 1940 and the Migratory Bird Treaty Act of 1918.

The bald eagle was no longer a nesting species (extirpated) in Connecticut by the 1950s. When Connecticut's first official Endangered, Threatened, and Special Concern Species List was passed in 1992, the bald eagle was classified as an endangered species. That same year, the state documented its first successful nesting of bald eagles since the 1950s when a pair raised 2 young in Litchfield County. Leg bands revealed that the nesting pair came from a reintroduction project in Massachusetts sponsored by the Massachusetts Division of Fisheries and Wildlife. Five years later, a second pair of bald eagles successfully nested in Connecticut. The nesting population has increased gradually and, in 2010, 18 pairs of bald eagles made nesting attempts in the state. Nesting attempts or territorial pairs have been documented in 6 of the state’s 8 counties. Due to the increase in nesting pairs in recent years, the bald eagle's status in Connecticut was reclassified as threatened in 2010.

Wintering eagles come to Connecticut looking for open water in which to feed when the land and waters in Maine and Canada are frozen. If harsh weather in Connecticut causes any open water to freeze over as well, the eagles continue to migrate farther south. Up to 100 eagles winter in Connecticut, from December to early March, along major rivers and at large reservoirs. The number of wintering eagles has been increasing slowly, depending on the severity of each winter. With the increase in nesting and wintering eagles in Connecticut, there is still a challenge to reconcile human recreation and shoreline development, which decrease suitable habitat, with the specific needs of this state threatened species.

Description
Adult bald eagles have a snow-white head and tail, and a brownish-black body. The bill, eyes, and feet are yellow. Immature eagles are uniformly grayish-brown. The distinctive adult plumage is attained at 4 to 5 years of age. Bald eagles are about 34 to 43 inches long, can weigh 8 to 14 pounds, and have a wingspan of 6 to 8 feet. The sexes are similar in appearance, although the females are larger. Bald eagles have a life expectancy of 25 to 30 years, and longer in captivity.

Young bald eagles are often confused with golden eagles; however, they are grayer than the darker golden eagle, and the bill is much heavier.

Habitat and Diet
Natural year-round habitat of bald eagles includes lakes, marshes, rivers, or seacoasts, where there are tall trees nearby for nesting and roosting and plenty of fish for eating.

Although bald eagles feed primarily on fish, they also are opportunistic predators and scavengers that will eat anything that can be caught easily or scavenged, such as waterfowl, small and large mammals, and livestock carrion. In addition, they have a reputation of being thieves, robbing other raptors or gulls of their catch.

Eagles kill prey by grasping it with their strong feet and sharp talons. They can carry their prey in flight but are unable to carry much more than 4 pounds. An eagle’s beak is used solely for tearing flesh.

Life History
Bald eagles reach sexual maturity at 4 to 6 years of age. The breeding season in Connecticut begins in January, and most pairs lay their eggs in February and March. Bald eagles return to the same nesting areas year after year and often breed with the same mate. If something happens to either the male or female, the surviving bird will find a new mate. The nest, which sometimes measures 7 to 8 feet across, is a flat-topped mass of sticks, with a lining of fine vegetation such as rushes, mosses, or grasses. It is built in trees, 10 to 150 feet above ground. There are usually 1 to 3 (average 2) dull, white eggs in a clutch. Both the male and female incubate the eggs and feed the young. The eggs are incubated for about 35 days, and the chicks usually fledge (reach flying stage) in 12 weeks.

Interesting Facts
The flight speed of a bald eagle ranges between 36 and 44 miles per hour.

At night, wintering eagles often congregate at communal roost trees; in some cases, they travel 12 or more miles from a feeding area to a roost site. Roosts are often used for several years. Many roosts are protected from the wind by vegetation or terrain, providing a favorable thermal environment. Use of these protected sites helps minimize energy stress. In addition, communal roosting may aid the birds in their search for food.

Despite their large size, eagles are easily disturbed by unpredictable human activity, making delineated protection zones necessary around areas of high eagle use, particularly nest sites and winter roosts. Disturbance at nest sites may cause the birds to abandon their nest, even if there are eggs or young in the nest. Because winter is a stressful time for eagles, it is important that preferred winter feeding areas be protected. If the birds are frequently disturbed from feeding and forced to travel to a different area for food, their lives may be threatened. Adult eagles are more easily disturbed than juveniles.

How You Can Help
Winter is a difficult time for any wildlife species, including bald eagles. Food is harder to find and cold temperatures cause energy stress. If you see one or more eagles feeding or roosting, leave them alone and observe them from a distance.

It is also important to stay away from nesting areas to avoid disturbing the birds. Several Connecticut bald eagle nests are located on private property where there is no public access. Respect posted areas and do not trespass on private property to view eagles.

The Wildlife Division participates in a midwinter eagle survey in January for the United States Geological Survey; volunteers are always welcome to help in this effort.

The production of this Endangered and Threatened Species Fact Sheet Series is made possible by donations to the Endangered Species-Wildlife Income Tax Checkoff Fund.
(rev. 10/10)