The Basics of Living with Black Bears

Black bears are increasingly common in Connecticut. Reports of bear sightings, even in heavily populated residential areas, are on the rise. The Wildlife Division has also seen an increase in the number of reported problems with black bears. All residents should take time to make themselves “Bear Aware” and learn about best practices to both reduce the likelihood of an encounter with a bear and know what to do in the event of an encounter.

The primary contributing factor to bear problems is the presence of easily-accessible food sources near homes and businesses. Black bears that consume human-associated food (e.g., birdseed, trash, pet food) on a regular basis become habituated (comfortable near people) and food-conditioned (associate humans, houses, and neighborhoods with food). As the bear population continues to grow and expand its range in Connecticut, and bears become increasingly food conditioned, conflicts with humans will continue to increase. Food-conditioned bears pose a greater risk to public safety and often cause more property damage to houses, cars, pets, and livestock.

Connecticut residents should take the following simple steps to avoid conflicts and problems with black bears:

BEARS NEAR YOUR HOME

Watch this video on Managing Food, Garbage, and Other Attractants

BEARS SEEN WHEN HIKING OR CAMPING

Bears in natural settings normally leave an area once they have sensed a human. If you see a bear, enjoy it from a distance. Aggression by bears towards humans is exceptionally rare.

Watch this video on Preventing Wildlife Conflicts with Electric Fencing

WHEN BEARS COME TO VISIT 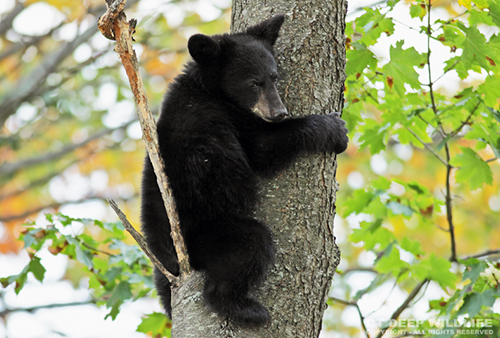 If a bear is seen in your town or neighborhood, leave it alone. In most situations, if left alone and given an avenue for escape, the bear will usually wander back into more secluded areas. Keep dogs under control. Stay away from the bear and advise others to do the same. Do not approach the bear so as to take a photo or video. Often a bear will climb a tree to avoid people. A crowd of bystanders will only stress the bear and also add the risk that the bear will be chased into traffic or the crowd of people.

When/How You Should Report a Bear Sighting or Encounter

Connecticut is a member of BearWise -- Helping people live responsibly with bears!

Back to Living with Black Bears