Where Are Black Bears Found in Connecticut?

Black bears occur throughout much of the state. In 2021, approximately 8,600 bear sightings from 156 of Connecticut’s 169 towns were reported to the DEEP Wildlife Division. Connecticut has a healthy and increasing bear population with the highest concentration in the northwest region of the state.

Why Are Bears in My Neighborhood?

Many homes are in or near bear habitat. The bear population is healthy and increasing in Connecticut and sightings have become more common. Bears spend time in neighborhoods because food sources are abundant and easy to access (birdfeeders, garbage, open compost, grills, etc.) They will readily use these food sources and revisit the same location over and over again. Bears that are attracted to human-associated food sources may lose their fear of people. Both you and your neighbors need to take steps to make yards and neighborhoods less attractive to bears, mainly by removing any food sources. (The Basics of Living with Black Bears)

What Should I Do if I See a Black Bear in My Yard?

If you see a black bear in your yard, enjoy the sighting from a distance and report your sighting. However, be sure you are not doing anything to attract the bear to your yard. Attempt to scare the bear off by making noise, such as banging pots and pans, shouting or using an air horn or whistle. Once the bear has left the area, take a close look at your yard for potential bear food sources, such as birdfeeders, pet food, dirty barbecue grills, open compost, or trash, and REMOVE those food sources IMMEDIATELY. Bears have incredible long-term memory and will revisit places where they have found food, even months or years later. Bears that are frequently fed, either intentionally or unintentionally through birdfeeders or garbage, may become habituated and lose their fear of people. If a bear behaves in a way that is a threat to public safety, it may have to be euthanized by the department.

When Can I Put Out Bird Feeders? 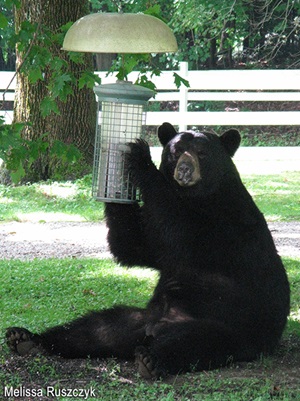 If you choose to put out bird feeders, do so in the winter months from December through late-March when bears are in their dens. Although most bears enter dens at some point, some can remain active for portions of or the entire winter season if food is available. It is important that you remove bird feeders at the first sign of bear activity.

If you live in an area with bears, it is best to avoid bird feeders altogether. Bears that find bird feeders will often repeatedly visit the site in search of food day after day and year after year. Bird feeders and other bird food will attract bears closer to homes and humans. When bears begin to use human-associated food sources, they will frequent residential areas, lose their fear of humans, and not flee when harassed. They can even cause damage by breaking into outbuildings and homes in search of food.

For those who enjoy watching birds, establish native plants in your yard and add water features to attract birds. These methods may increase bird diversity and prevent unnatural feeding of a variety of wildlife species. Learn how you can bring wildlife to your yard with native landscaping.

Is It Safe to Hike, Run, Bike, or Walk My Dog in the Woods?

Yes! It is safe to enjoy the outdoors regardless of what region of the state you live in or are visiting. If your dog is hiking with you, it is imperative that you keep the dog on a SHORT leash and DO NOT let it roam free – this is for the safety of your dog, yourself, and wildlife. When visiting areas where bears are more common, hike in groups and make your presence known by talking or singing. Keep small children close by and on trails. Although black bears have injured and even killed humans in North America, such cases are exceptionally rare. Always be aware of your surroundings and if you happen to encounter a bear, follow the advice offered in the next question.

What Should I Do if I Encounter a Bear While Out in the Woods or on a Trail?

Remain calm and observe the bear from a distance. Do not approach or try to get closer to a bear. If the bear is unaware of your presence, back away or make noise which will often cause the bear to flee. If the bear is aware of you and does not flee, talk to the bear in a calm voice and back away slowly. Never run or climb a tree. If the bear approaches, be offensive. Make more noise, wave your arms, and throw objects at the bear. Black bears rarely attack humans. However, if you are attacked, do not play dead. Fight back with anything available.

How Can I Protect Myself from Black Bears While Camping?

Keep your camp site clean! Pick up all garbage and food scraps and store them in wildlife resistant trash containers. Store food in double plastic bags or tightly sealed containers and keep it in your car if possible. Contained food can also be stored in a backpack and hung from a tree at least 10 feet above the ground and 6 feet from the tree trunk. Never store food in a tent. When camping, sleep at least 100 yards from your cooking area and food storage site. If this is not possible, take extra precautions to thoroughly clean and store away all cookware and pick up any food scraps.

What Does It Mean if a Bear Has a Collar or Ear Tags? 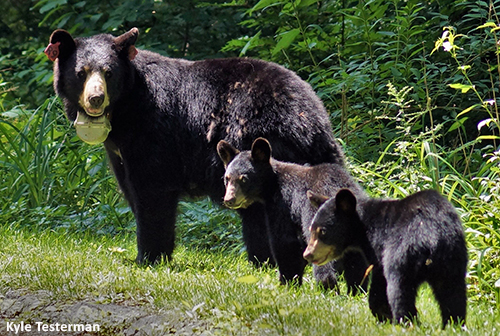 A common misconception is that a tagged bear in Connecticut is a problem bear, and a bear with two ear tags was caught on two different occasions because it was causing problems. Actually, every bear receives two ear tags (one in each ear) the first time it is handled by DEEP, regardless of why it was tagged. Most tagged bears have not been caught as problem bears, but rather as part of a project to research the state’s bear population.

A bear with a collar will also have ear tags. The collar helps biologists locate a bear and track its movements. Data collected from collars provide biologists with important information about the growth, movements, and health of Connecticut’s bear population.

Ear Tags Placed on Black Bears in Connecticut by Year and Color:

Why Can’t a Problem Bear Be Relocated?

As Connecticut’s bear population continues to increase, more bears, particularly young bears, will be seen near residential areas. The DEEP’s response will depend on the specifics of each bear situation. The mere presence of a bear does not necessitate its removal. In most cases, if left alone, the bear will make its way to a more natural habitat. Removing food attractants, such as bird feeders and garbage cans, reduces the chance that bears will go near homes. The DEEP seldom relocates bears. An exception may be made to remove a bear in an urban location when there is little likelihood that it can leave safely on its own and when the bear is in a position where it can be safely immobilized. In these rare instances, bears are released in the nearest suitable habitat, which is likely already a part of the bear’s local home range.

Relocation of Bears in Connecticut: Although heavily forested, Connecticut is a highly developed state. No large areas without humans are available to relocate a problem bear. Relocated bears seldom remain where they are released. Bears, particularly males, have a large home range of 12 to 60 square miles and travel long distances. They have a strong homing instinct and may return to where they were caught or become a problem somewhere else.

Relocation of Bears to other States: Black bears cannot be relocated to other states, including larger western states like Montana or Colorado, because other states will not accept any bears, especially problem bears. States with growing or large bear populations have similar policies as Connecticut’s. Other state wildlife agencies would also euthanize an aggressive bear that is a public safety concern.

Relocation of Bears to Zoos or Sanctuaries: The Connecticut DEEP does not take wild animals that have become unresolvable human safety issues into captivity. It may be a feel-good solution for a problem bear to be moved to a zoo or sanctuary, but that is easy to say and hard to do. Black bears are not a high priority species for zoos or sanctuaries because they are so common. Zoos also do not have the capacity to take all problem bears that states deal with each year. Because black bears readily reproduce in captivity, there is no shortage of captive bears for zoos. Animals that are raised in captivity do well in captivity. It is difficult for a wild bear that roams in the forest for all its life to suddenly adapt to a small enclosure at a zoo or sanctuary. Even under the best circumstances at the best zoos, captivity cannot replicate a wild animal’s habitat.

Are DEEP Staff Trained on How to Immobilize Bears?

DEEP Tranquilizing Teams, consisting of Environmental Conservation Police officers and wildlife biologists, receive specialized training and equipment to immobilize wildlife. These trained individuals are the only ones involved in immobilizing bears and other wildlife.

What Is Aversive Conditioning and Why Is It Used for Bears?

Aversive conditioning is a technique that uses negative stimuli (i.e., shooting with rubber bullets or paintballs, pepper spray, loud noises, etc.) to cause pain, avoidance, or irritation in an animal engaged in an unwanted behavior. The bear learns to associate the undesirable behavior with a negative experience, and as a result, is more likely to avoid conflict in the future. Research on this technique has shown it has limited effectiveness, but may be valuable in providing a short-term solution to human-bear conflicts.

Back to Living with Black Bears