The Town of Mansfield is one of Connecticut’s most progressive towns when it comes to recycling. Much of this environmental ethic can be attributed to its commitment to advance recycling education throughout the community. In addition to recycling the mandated items, Mansfield also recycles freon, ni-cad batteries, fluorescent bulbs, computers and alkaline batteries. In an effort to stabilize waste disposal costs and increase the recycling rate, the town implemented a Pay-As-You-Throw program that has been in effect since 1990. This program pays for itself and other solid waste programs in Town. Southeast Elementary School established an organics recycling program, first by finding a pig farmer to take food scraps, then by establishing on-site composting. Southeast Elementary School became the first to receive the "Green School Award" from the CT Recycler’s Coalition in 1998. Mansfield Middle School received the award in 2001. It seemed deserving that a grant be awarded to Mansfield to continue and expand organics recycling at schools, and to share their knowledge with other schools throughout the state.

This project has three parts that include the establishment of on-site composting at Mansfield Middle School, and information transfer through the creation of a school composting manual and website.

Seven oversized compost bins were constructed of plastic lumber and hardware cloth by the Public Works Department. Three of them are wider than the rest and made of a steel-welded frame in order to accommodate turning with the Bobcat loader that the school has on-site. Considerable effort was made to recruit volunteers and to educate the student body and staff about the compost program. Incentives such as a raffle, pizza party and tickets redeemable at the Middle School Store were offered. Powerpoint Presentations were shown to homerooms and potential recruits. A student/teacher project team was established that is responsible for collecting the kitchen and lunchroom food scraps and bringing them out to the composter. Students and teachers turn the compost from one bin to the next until the compost reaches the larger three bins. Then, the school maintenance staff takes over turning duties with the Bobcat, and empties the bins at the end of the school year. The School averages 48 pounds of food waste daily.

A school composting manual is being developed in an effort to give other schools throughout CT the basics of starting an on-site food composting program. The manual will be generic enough that any school (K - 12) will be able to benefit from the content. In addition, it will include specific things that were learned from setting up the school program in Mansfield. When complete, the manual will be posted on the Mansfield website, the CT DEP website, and will be distributed on CD ROM to every school in Connecticut.

A website about the Mansfield Middle School Composting Project has been created at http://www.mansfieldct.org/mms-compost/ and will be updated periodically.

The benefits of this pilot include: 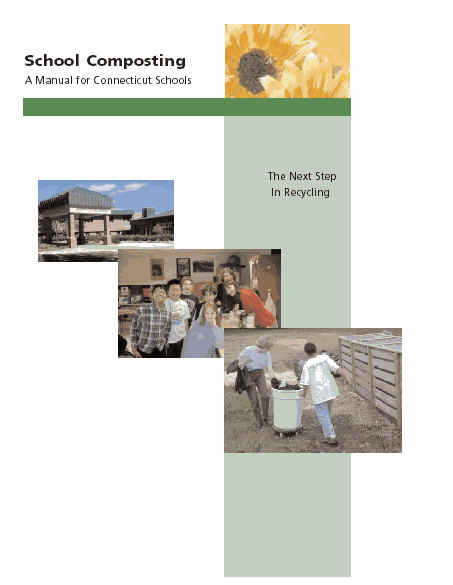 The manual titled "School Composting...the Next Step in Recycling" is finished! For waste reduction purposes, the manual has only been reproduced in electronic format.  It is available to download from this website as a PDF document. A CD-ROM of the manual will be mailed to every Connecticut public and private K-12 school in late September.

In the manual you will find strategies for initiating a compost plan, bin design, routine steps of the composting operation, promotional activities, as well as an exhaustive section on lessons and resources. Specific information about what worked well at Mansfield Middle School has been incorporated throughout the manual in special call-out boxes.

We are grateful to the Town of Mansfield for the groundbreaking work that they have done in both implementing a model school recycling and composting program, and producing this manual. The CT DEP funded the production of the manual to provide a model for our schools…to help them reduce their waste steam, increase recycling, and to teach students about responsible waste management and the environmental advantages of composting. It is our hope, after reviewing the manual, that more schools will expand their recycling programs to include composting of food scraps. Schools that become proactive and take the next step in recycling will find this manual an integral and valuable resource.