What is Construction and Demolition Waste? 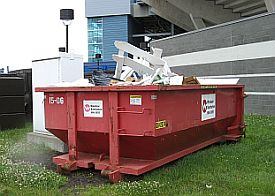 Landfills accepting C&D waste have limited capacity.  Many have already closed or are scheduled to close.  Currently, most of the C&D waste generated in Connecticut is disposed of in out-of-state landfills and only an estimated 7% of this is reported recycled. These figures are only reflective of the waste which passes through Connecticut permitted solid waste facilities and reported to the DEEP. The 7% reported recycled rate does not include most of the clean fill generated and reused or recycled, scrap metal recycled from construction projects, materials directly hauled from a job site to an out-of-state recycling end market, or materials reused on site.

The following table summarizes the type of waste, legal classification, and examples:

The controlling statute concerning the management of construction and demolition waste in Connecticut is in Title 22a, Chapter 446d - specifically Section Sec. 22a-208x. This statue reads as follows:

Sec. 208x.  Disposal options for certain types of bulky waste. (a) As used in this section and section 22a-208y, (1) "construction and demolition waste" means waste building materials and packaging resulting from construction, remodeling, repair and demolition operations on houses, commercial buildings and other structures, excluding asbestos, clean fill, as defined in regulations adopted under section 22a-209, or solid waste containing greater than de minimis quantities, as determined by the Commissioner of Environmental Protection, of (A) radioactive material regulated pursuant to section 22a-148, (B) hazardous waste as defined in section 22a-115, and (C) liquid and semiliquid materials, including, but not limited to, adhesives, paints, coatings, sealants, preservatives, strippers, cleaning agents, oils and tars; and (2) "processed construction and demolition wood" means the wood portion of construction and demolition waste which has been sorted to remove plastics, plaster, gypsum wallboard, asbestos, asphalt shingles, regulated wood fuel as defined in section 22a-209a and wood which contains creosote or to which pesticides have been applied or which contains substances defined as hazardous waste under section 22a-115.

(c) Construction or demolition wood generated at a residence, other than wood that has been pressure-treated or that otherwise contains arsenic, furniture, mattresses and rugs or any such waste which has been crushed, chopped, shredded or otherwise processed shall be considered municipal solid waste and may be disposed of at any solid waste disposal area for which a solid waste permit has been issued for the disposal of bulky waste, or at a resources recovery facility or municipal solid waste landfill.