"There aren't many things that are universally cool, and it's cool not to litter.  I'd never do it."
~ Mathew McConaughey
Litter, whether intentional or unintentional is a form of pollution resulting from improperly handled waste. Litter includes such things as cigarette butts, coffee cups, tires, plastic bags and food containers. Litter ends up on our sidewalks and roads, in our parks and on our private property. Research has proven that litter attracts more litter. By contrast, a clean community discourages littering and raises local living standards and quality of life.

Littering Is Illegal in Connecticut

Connecticut has had an anti-litter law since at least 1897, when people who threw nails, tacks, scrap iron and certain other debris on highways or streets could be fined $20. In 1992, littering was made an infraction, which means littering is punishable by a fine, usually set by a Superior Court judge, of between $35 and $90. An infraction is not a crime. It is however, against the law to litter.

CGS Sec. 22a-248 defines "Litter" as "...any discarded, used or unconsumed substance or waste material, whether made of aluminum, glass, plastic, rubber, paper, or other natural or synthetic material, or any combination thereof, including, but not limited to, any bottle, jar or can, or any top, cap or detachable tab of any bottle, jar or can, any unlighted cigarette, cigar, match or any flaming or glowing material or any garbage, trash, refuse, debris, rubbish, grass clippings or other lawn or garden waste, newspaper, magazines, glass, metal, plastic or paper containers or other packaging or construction material which has not been deposited in a litter receptacle."

Releasing balloons is a form of litter that has huge impacts on our coastal wildlife.  CGS Sec. 26-25c restricts the release of ‘lighter-than-air’ balloons stating, “(a) No person, nonprofit organization, firm or corporation, including the state and its political subdivisions, shall knowingly release, organize the release of or intentionally cause to be released into the atmosphere within a twenty-four-hour period ten or more helium or other lighter-than-air gas balloons in the state. (b) Any violation of subsection (a) of this section shall be an infraction.”

Beach Clean-ups in Connecticut (CT Fund for the Environment) 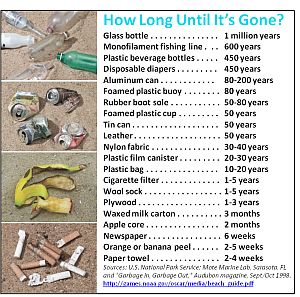 Litter. It Costs You.  (GA) Georgia’s efforts to curb litter

Activities and Resources in Connecticut

About 380 billion plastic bags, sacks and wraps are used every year in the U.S.! While this is a huge number, very little (about 5%) of plastic bags in the municipal solid waste stream are actually recycled. Unfortunately, many of these bags end up as litter along our roadways and coast lines. Plastic bags do not biodegrade, they photodegrade, which means they slowly break down into smaller and smaller bits that can contaminate soil and waterways. Recently, plastic bag bans, taxes, fees or mandatory recycling laws have hit areas of the U.S., including Connecticut and the northeast, bringing this issue to the forefront of the environmental debate. (Source: earth911 )

Your Local Police Department: If the dumping is ongoing and/or you know who did the dumping, call the local police. If a vehicle is involved, get the license plate number and a description of the vehicle doing the dumping...vehicles can be seized!

Your Town/City Hall: If the dumping has already taken place, call your Town or City Hall to report the incident. Usually, the contact at the Town Hall is your local Health Department.

Connecticut State Police Message Center (860) 685-8190  Call them if you witness littering from a car on a state highway.  The call will be routed to the appropriate state police barracks.  If you have a license plate number, they may investigate.