On December 13, 2000, Sikorsky delivered a new helicopter to the Navy which was coated with a new high performance paint formulated without any volatile organic compounds (VOC's) or hazardous air pollutants (HAP's). This new paint has passed performance trials under actual military operating conditions and has now become the new standard helicopter paint. The previous paint contained four chemicals targeted by the federal Environmental Protection Agency for reduction or elimination whenever possible. This new paint is the result of a collaborative effort between Sikorsky, their paint supplier and the Navy.

Sikorsky Aircraft Corporation, based in the town of Stratford, has been a part of the United Technologies Corporation since 1929. The company makes helicopters for military, industrial and commercial applications at facilities in Connecticut, Florida and Alabama.

At the Main Street, Stratford plant they develop new products and perform design work for current helicopters. They also manufacture components, assemble airframes, paint and flight test the finished helicopters before delivery to their customers.

The facility's airframe paint shop has approximately 20 employees with two spray booths capable of handling complete helicopters and one smaller booth for parts.

All aircraft, including helicopters are finished with multiple coats of paint culminating with the topcoat, which is formulated to have specific characteristics such as weight, drying rate, visibility, and resistance to degradation from exposure to chemicals, ultraviolet light and ocean salt spray. Sikorsky's use of the new topcoat is the subject of this case study.

Traditionally, paint manufacturers have relied on organic solvents, that are classified as VOC's and HAP's, as the carrier to disperse their paints evenly over the surface when applied and then evaporate quickly. Organic solvents have properties that make them very desirable in this application. However, these VOC's and HAP's have been found to have negative impacts on the environment and human health and therefore have been targeted for elimination whenever feasible.

The four solvents used in standard topcoats were methyl ethyl ketone (MEK), methyl isobutyl ketone (MIBK), toluene and xylene. All four are classified as Volatile Organic Compounds (VOC's) and Hazardous Air Pollutants (HAP's), and as such, are targeted for elimination from use by the federal government. HAP's are just what they sound like - hazardous to human health. VOC's are a class of chemicals that contribute to ground level ozone (also called "smog"), which is a serious problem in the northeast. In Connecticut, aircraft coatings are allowed to contain up to 3.5 pounds VOC per gallon. The following EPA map depicts the ozone problem areas for New England. 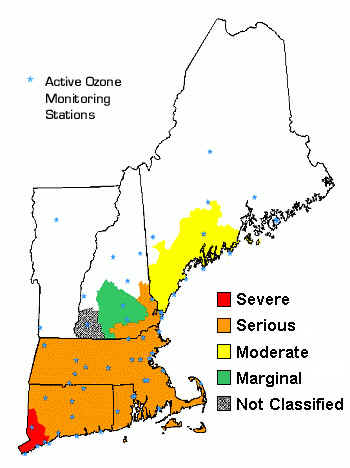 Sikorsky worked with their paint supplier (Deft Coatings, Inc. of Irvine, California) and the Naval Air Warfare Center in Patuxet River, Maryland to create and test new formulations of the polyurethane topcoat that would reduce or eliminate organic solvents and still maintain the performance required by their customers. Polyurethane paints are based on resins made by the condensation of organic isocyanates with compounds or resins containing hydroxyl groups.

Over a four year period Sikorsky evaluated various alternative formulations of two-component catalyst-urethane paints submitted by Deft for properties such as solvent resistance, viscosity, cleanability, hiding power, fluid resistance, adhesion, intercoat compatibility, corrosion (salt spray) resistance, heat resistance, thickness, abrasion, color and others. They then submitted the final candidate for performance testing with the Navy, which has the ultimate approval for any new paint on their aircraft. The new topcoat had to meet strict Military Standard specifications and pass Navy performance tests designed to ensure a certain level of performance that would support the rigorous missions these helicopters regularly fly.

Sikorsky scheduled a representative helicopter component for painting in February, 1999. The finished component was evaluated and the new topcoat approved, in concept, for application on a complete helicopter. Approval to conduct actual full-scale application on a specific production aircraft occurred in August, 2000. The application of the new topcoat on the first helicopter was carried out on November 14, 2000. The benefits of the new paint quickly became apparent. There was much less overspray with virtually no odors, a decrease in paint usage of approximately 25% and further, there were no flaws detected in the dried topcoat. This is noteworthy, in that it is unusual for any major process change to yield a product that is totally defect-free on the first try.

This aircraft was then run through various pre-delivery tests including flight tests. These tests are a good indicator of how the topcoat will perform against exposure to high temperature exhaust along with cleaning of the resulting soot from the painted surfaces. The Navy took ownership of this helicopter on December 13, 2000.

Subsequent to this initial application, the Navy has applied the new coating to additional rotary and fixed-wing aircraft at various military installations. The subject aircraft were returned to service where no problems have been reported. 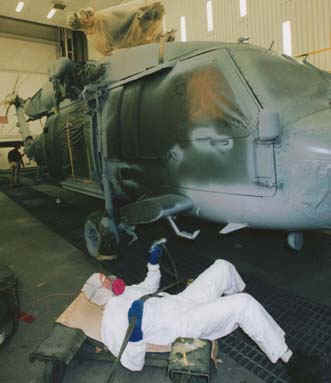 The company's paint shop personnel report that the material is easy to work with. They prefer it to the "old style" solvent-borne coatings.

The company has been keeping very close track of the amount of both VOC's and HAP's in every ounce of paint that they use at the facility. This inventory is submitted to the DEP as part of their air emissions requirements under federal and state environmental regulations. Since the new topcoat reportedly has zero VOC and HAP, it will not contribute to their air emissions, which has maximums which must not be exceeded. This also contributes to the company's long term goal of dramatically reducing the emission of these chemicals. This facility has reduced from approximately 130,000 pounds per year in 1991 to less than 40,000 pounds per year in 1999 as reported to the federal Environmental Protection Agency for the Toxics Release Inventory, of combined total releases and transfers for these four chemicals.

The employees are pleased with the new system due to the virtual elimination of odors, non-flammability and because it does not require any specialized training to result in a uniform, acceptable surface appearance.

The company also reports that there seems to be some labor savings with the new system in place, but these have yet to be quantified.

The new topcoat has performed up to the standards of the Navy and it is seen as a more environmentally friendly material. It is virtually impossible to tell the difference between the old VOC/HAP topcoat and the new water-borne topcoat once they are fully cured. This was noticed when four aircraft were situated in a line and the zero-VOC coated aircraft was virtually indistinguishable from the other three.

The information in this case study is provided solely as a service to Connecticut businesses. This information may not include all available services and suppliers, and does not constitute an endorsement by the DEP or Sikorsky Aircraft Corporation. Use of this information does not in any way lessen your responsibilities for compliance with applicable state and federal laws.