What is a microbead?

Microbeads are plastic microscopic microspheres used as exfoliating agents in cosmetics and personal care products such as toothpaste, body scrubs, and face wash. These beads are used as a replacement for previously used natural exfoliating materials such as pumice, oatmeal, or walnut husks. These tiny particles cannot be filtered out in wastewater treatment systems and end up in our lakes, rivers and ocean. Even worse, these microplastics can serve as tiny carrier stations for other harmful toxins and chemicals. 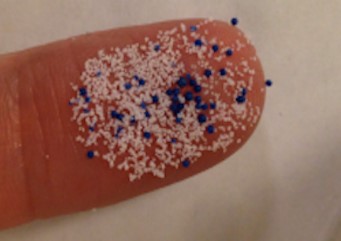 What makes microbeads threatening to the environment?

Scientific research has shown that microbeads are washed down our bathroom drains and because of their size and buoyancy they are not filtered by wastewater treatment plant systems, and eventually enter our waterways and pollute our oceans.  They are ingested by aquatic life and birds by fooling them to thinking it is food.

Microbeads persists for decades, acting as sponges for toxic chemical pollutants serving as a pathway for toxins to enter the food chain and contaminate the fish and wildlife we eat. Plastic debris can accumulate pollutants such at PCBs.

What are microbeads made of?

Microbeads are most frequently made of polyethylene terephthalate (PET), but can be made of other petrochemical plastics such as polypropylene and polystyrene.

Where do I look on my personal care products to see if microbeads are in the product?

Many companies clearly list the term "microbeads" on the front label. You can also check the ingredients list to see if the product contains microbeads, or look for the word "polyethylene" which is a term for plastic. 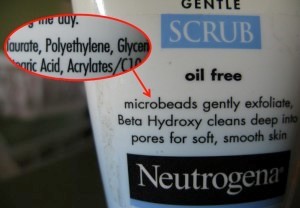 An app called "Beat The Microbead" (www.beatthemicrobead.org) may be used to help consumers who are unsure if the product they are purchasing contains microbeads.  When you scan the barcode of a product, if the app turns red,  the company is using microbeads in their product. If the result is orange, they use them but have pledged to phase them out of their product line.

States are working to ban microbeads in consumer products

There are numerous state bills introduced around the country focused on phasing out microplastics from cosmetics and personal care products. California, Illinois and New Jersey are included in the growing list of states with signed bans.  In Connecticut, a state ban on microbeads was passed by the General Assembly. Companies will have until December 31, 2018 to phase out the use of plastic microbeads from their cosmetic products.

President Barack Obama signed a bill into law December 28, 2015 banning microbeads. This bill, called the Microbead-Free Waters Act of 2015, amends the Federal Food, Drug and Cosmetic Act to ban rinse-off cosmetics that contain intentionally added plastic microbeads beginning on January 1, 2018, and to ban manufacturing of these cosmetics on January 1, 2017. These bans are delayed by one year for cosmetics that are over the counter drugs.

For additional information regarding microbeads, please contact the Municipal Facilities section by e-mail or call us at 860-424-3704.