It is critical that boaters take responsibility for stopping the spread of these plants and animals.

IT IS ILLEGAL TO TRANSPORT on a boat or trailer any vegetation and the following aquatic invasive species (as determined by the Commissioner pursuant to PA 12-167):

To learn more about some of the freshwater invasive plants and animals, select one of the photos below:

Zebra mussels have been found in Lake Zoar, Lake Lillinonah and Lake Housatonic. This is the first report of a new infestation of this highly invasive bivalve in Connecticut since 1998 when zebra mussels were first discovered in East and West Twin Lakes in Salisbury. During  2009, zebra mussels were discovered in Massachusetts in Laurel Lake and in the mainstream Housatonic River. At this point, it is uncertain if the mussels found in Lakes Lillinonah, Zoar and Housatonic are the result of downstream migration from these upstream sources of the result of a separate introduction, however, downstream migration is suspected.

Boaters and anglers using any of these waters and western Connecticut in general should use extra care to avoid transporting water, aquatic vegetation, and possibly zebra mussels to new locations.

The zebra mussel is a black and white striped, bivalve mollusc which was introduced into North American waters through the discharge of ship ballast water. Since its discovery in Lake St. Clair (Michigan/Ontario) in 1988, the zebra mussel has spread.

A Chinese mitten crab was found in Connecticut waters and confirmed by DEEP and Connecticut Sea Grant in June of 2012. The crab was collected from the Mianus Pond fishway on the Mianus River (Greenwich) and is the first confirmed sighting of this invasive crab in this state. Where abundant, Chinese mitten crabs can damage fishing gear, clog pumps and intake pipes, cause riverbank erosion through their burrowing activities, and outcompete native species for food and habitat. These crabs are relatively new to the Atlantic coast; however, and at this time it is unclear as to what their effects will actually be here.

DEEP needs your help! Be on the lookout for Chinese mitten crabs.

Mitten crabs are NOT native to Connecticut but have been found in our state. Establishment of mitten crabs in Connecticut may have negative consequences for coastal and freshwater ecosystems. Any crab found in freshwater should be investigated, as there are no freshwater crabs in New England.

Please help us learn more about mitten crabs in Connecticut.

If you catch a mitten crab: 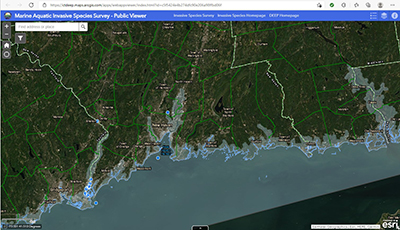 Rusty crayfish is a large crayfish that can be identified by reddish spots on each side of the body just in front of the tail, grayish green color, smooth mandibles (mouth parts without serrated edge) and black bands on tips of claws. Rusty crayfish feed heavily on invertebrates that are important food sources to stream fishes and can destroy aquatic vegetation beds and habits that can impact game fish populations. Rusty crayfish is spread via bait buckets.

Milfoils forms very dense mats of vegetation on the surface of the water, which can make water activities dangerous.

Variable leaf milfoil was first discovered in Connecticut in 1936 and can now be found in approximately 30 lakes and ponds in Connecticut. Variable leaf milfoil is a rooted, annual plant with a thick red stem and has submerged leaves that are typically opposite. It spreads through fragmentation. Like Eurasian water milfoil, variable leaf milfoil can form a dense mat, which interferes with boating, swimming and other recreational activities, and can alter the ecosystem of the lake. These plants also produce flowering spikes that can emerge from the water.

Curly leaf pond weed is one of the most common invasive plants in Connecticut. It was first discovered in 1932 and can now found in 40 Lakes and pond in Connecticut as well as the Connecticut and Housatonic Rivers. Curly Leaf Pond Weed has a flattened stem with alternate leaves. The leaves are stalkless and have wavy edges (where it gets its name from). These plants spread via turions (soft, hardened leave). Like the invasive milfoil, curly pond weed can produce large, dense mats that interfere with water activities and can alter the ecosystem of the waterbody. These plants differ from most of the invasive plants in Connecticut, in that they often die back by mid-summer. The turions are dormant until the autumn when the water is cool.

Hydrilla was first discovered in 1989 and can now be found in two lakes in Connecticut, but is considered extremely aggressive and can outcompete native and invasive species. Hydrilla is a perennial with five whorled leaves which are finely toothed, around the stem. It spreads through fragmentation and tubers that overwinter in the sediment.

Fanwort was first discovered in 1937 and can now be found in more than 30 lakes in Connecticut and in wetlands along the Connecticut River. Fanwort has submerged leaves that are opposite and have petioles, or short stems. They also have a few small oval, floating leaves at the top of the plant just before the white or pickish flower that can emerge from the water. Fanwort spreads primarily through fragmentation.

Water chestnut was first discovered in Connecticut in 1999 and can be found in the following locations: scattered sites along the Connecticut River from Hartford to Lyme, both in the main stem river and in a number of coves (including White Oaks Cove, Keeney Cove, Hamburg Cove) and connected ponds. Water chestnut has also been found in a number of other waters scattered throughout CT including the Mattabesset, Hockanum and Podunk Rivers, small ponds in Eastford, Thompson and West Hartford, Bantam Lake (eradicated, non found in the last several years), Mudge Pond and at the confluence of the Still River and the Housatonic River.

Anglers fishing in the Connecticut River, its tributaries, and elsewhere should be on the lookout for this highly invasive plant. DEEP and other organizations are involved in eradication efforts. 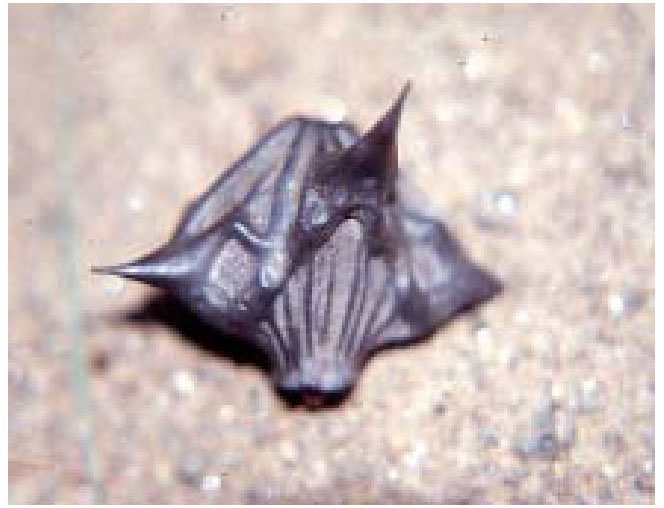 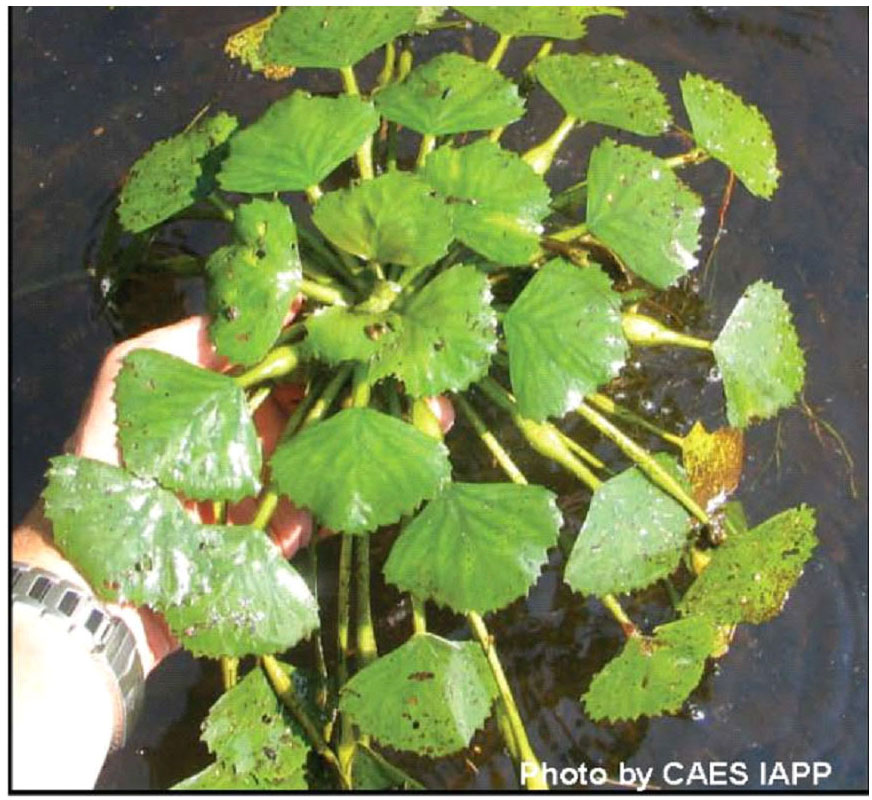 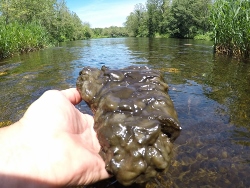 Rock snot (Didymosphenia geminata, Didymosphenia hullii, Cymbella janischii) is a collective term for a group of microscopic diatoms (a type of algae) which during “blooms” (a time when the algae goes through explosive and rapid growth) and can form large mats of thick cotton-like material that covers large portions of the stream bottom.

Dr. Diba Khan-Bureau is a UCONN research scientist who has studied, since 2012, the 3 different species of rock snot  (diatoms that form copious amounts of mucilaginous stalks) now found in the West Branch Farmington River and is currently monitoring the growth of rock snot (e.g. didymo). She is asking for your assistance by providing her information of the location(s) of the growth and your opinion on the changes you have seen in the river ecosystem. If you would like to help, please contact Diba at diba.khan-bureau@uconn.edu.

History in Connecticut - In March of 2011, an angler collected a small sample of what was believed to be “didymo”. After its discovery, routine monitoring began in order to document any spread or additional blooms (Kahn-Bureau et. al. 2014). Through this extensive work, it was determined that the didymo found in Connecticut was actually a new species (Kahn-Bureau et. al. 2016). This species has been named Didymosphenia hullii, after the late Dr. David Hull, former director of transplant surgery at Hartford Hospital. 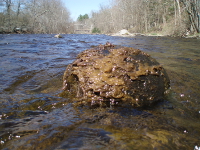 While working to broaden our knowledge about didymo, a second type of “rock snot” called Cymbella janischii was discovered about one mile downstream of the Route 318 bridge in Barkhamsted (near church pool) (Kahn-Bureau et. al. 2016). This diatom is native to the Pacific Northwest and has only been found east of the Rocky Mountains in a few locations (closest being New York). It is likely that this alga was inadvertently transported to the West Branch Farmington by humans.

As of June 2017, Didymosphenia hullii and D. geminata have been observed within the West Branch Farmington River, along with an extensive bloom of Cymbella janischii (Kahn-Bureau personal communication). Until now didymo had been only confirmed above the confluence with the Still River, Barkhamsted. In June of 2017, both have been confirmed as far downstream as the Barkhamsted/New Hartford town line. The Cymbella bloom is prolific and widespread throughout the West Branch Farmington River Trout Management Area.

Additional information can be found in our Rock Snot Brochure and a video on our CT Fish and Wildlife Facebook page.

Please follow the advice below to help prevent the spread of didymo or any other potential aquatic species to new waters.

What you can do to prevent the spread of didymo and many other aquatic organisms:

Before leaving the water:

At home or prior to your next location:

If drying is not possible: