Plants, invertebrates and fish aren’t the only invaders. Just as insidious are a number of new diseases and parasites that affect fish (but are harmless to humans). 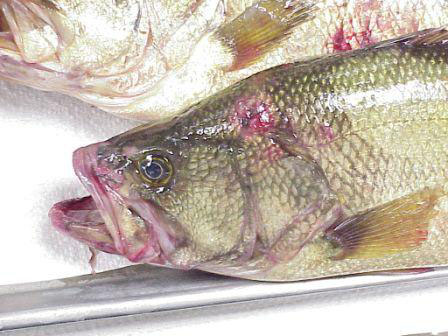 Largemouth Bass Virus is a relatively new disease that has been found in Connecticut.

This virus was first found in 1991 at Lake Weir (Florida). Originally thought to be limited to southern waters, this disease has spread northwards into the Midwest and Northeast.

Although LMBV can infect a number of fish species, it is only known to cause mortality of largemouth bass, and has been responsible for a number of notable fish kills throughout its southern distribution.

LMBV can be transmitted by consumption of infected prey, through the water, and by fish-to-fish contact. The virus is thought to be most active during the warmer summer months. Because the virus may survive in water for up to a week, it can be transferred between water bodies in improperly cleaned live wells.

Stress appears to promote the onset of symptoms that can lead to death. Common stressors include warm water temperatures, low dissolved oxygen concentrations, overcrowding in live wells, and improper handling by anglers.

DEEP Fisheries biologists first began collecting largemouth bass to test for LMBV in 2005 and a number of Connecticut lakes have been sampled. Bass from Amos Lake (Preston) and Gardner Lake (Salem) have tested positive for LMBV.

Properly cleaning and disinfecting boats, live wells and gear will help prevent the spread of this virus. Anglers should never transfer fish between water bodies!

This highly contagious viral disease mainly affects minnow species, most notably common carp (including domesticated koi). Once infected fish show symptoms, mortality ranges from 30 to 90%. First North American outbreak was observed in a koi farm in North Carolina in 2002. The virus has since emerged in wild carp populations in Wisconsin and Illinois, and in koi ponds in Washington State. This virus can survive in water or mud for at least several weeks. USDA is developing regulations that place special restrictions on the importation of SVC-susceptible species into the United States.