Pyrrhotite and Crumbling Concrete in Connecticut 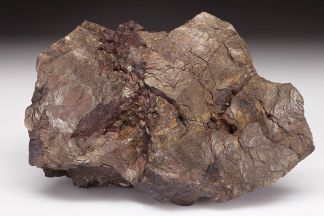 Crushed rock containing pyrrhotite has been used in housing foundations across central and eastern Connecticut, as well as in Massachusetts (Wille & Zhong, 2016). Pyrrhotite weathering in the presence of moisture and air produces secondary minerals that expand, causing concrete to crack. This compromises the structural integrity and accelerates degradation with the increased infiltration of water and air. Crushed rock aggregate containing pyrrhotite is associated with a quarry in Willington, Connecticut.  The source rock, a geologic formation named the Brimfield Schist, is common in eastern Connecticut (Rodgers, 1985).

Pyrrhotite in concrete is a geohazard that has caused a societal crisis in Connecticut, impacting as many as 35,000 homes, condominiums, and municipal buildings. Homes are going into foreclosure and people are losing their life savings, as the costs to replace entire foundations can be greater than $200,000. There are a number of State and Federal agencies working to support the needs of impacted homeowners and address the array of interrelated issues (FEMA.gov Federal Response).  State legislation PA19-192 names the Connecticut State Geologist as one of the people charged with developing data associated with this issue. 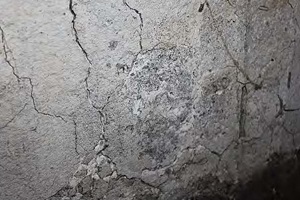 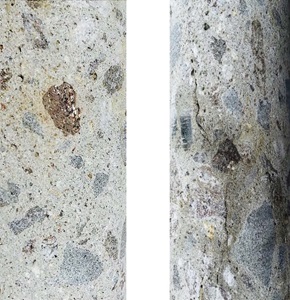 Role of the Connecticut Geological Survey
Connecticut’s State Geologist, who directs the Connecticut Geological Survey Program, has been an advisor and scientific resource on the pyrrhotite issue for the Governor’s office, the Army Corps of Engineers, the Department of Consumer Protection, and the Department of Housing. The State Geologist provides geoscience information, mapping of the potential distribution of pyrrhotite in Connecticut bedrock, and technical review of pyrrhotite testing and reporting methods. The State Survey works to improve geologic mapping and related data, with special reference to economic products and minerals (CT Statute Ch.462), through relationships with Federal, State, and academic partners. 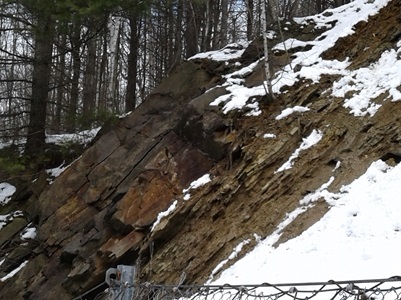 Connecticut Pyrrhotite Map
The Connecticut Pyrrhotite Map shows statewide distribution of geologic formations containing pyrrhotite. The mapping is based on the mineralogy of rock formations reported on the Bedrock Geological Map of Connecticut (Rodgers, 1985).  In eastern Connecticut, the map shows the areal extent of the Brimfield Schist, the Southbridge Formation, and portions of the Tatnic Hill and Bigelow Brook Formations. In western Connecticut the Litchfield Norite is shown.  The Connecticut Pyrrhotite map is designed for use at 1:125,000 or smaller scale [1 inch on the map is approximately equivalent to 2 miles]. This planning map illustrates bedrock geologic conditions statewide and is not intended for localized assessments nor is it inclusive of all potential areas of pyrrhotite occurrence. 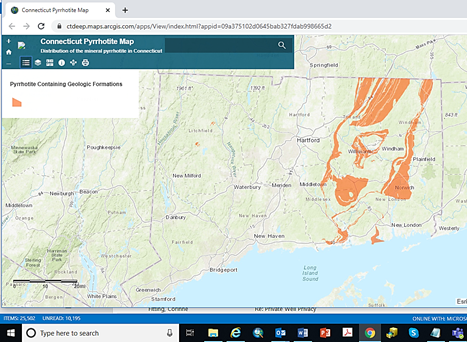 More detailed bedrock mapping can provide a higher resolution view and delineate areas of sulfide rich bedrock more distinctly. Modern detailed geologic mapping, integrating mineralogy, structural investigations, and geochemistry can provide guidance for crushed stone aggregate resource evaluations, and environmental review. Beyond the hazard of sulfides such as pyrrhotite in concrete, blasting and rock crushing operations involving sulfide minerals can have an impact on environmental quality by causing acid drainage, which is detrimental to drinking water quality and can have ecological impacts.  DEEP Guidance Document

New State Geological Survey Detailed Mapping Project (2020-2021)
To provide more detailed mapping of pyrrhotite and other sulfide mineral occurrences, The Connecticut Geological Survey with support from the USGS National Cooperative Geologic Mapping Program, will compile a geologic map in the Coventry and Stafford Springs 7.5 minute quadrangles in north-central Connecticut (project area shown below). The project will combine previously unpublished detailed mapping in the area with information gained through new geochemical and mineralogical analyses. The resulting bedrock compilation will delineate the distribution of pyrrhotite, provide context for subsequent geologic investigations on sulfide mineralogy in Connecticut, and serve as an important tool for land use decisions. 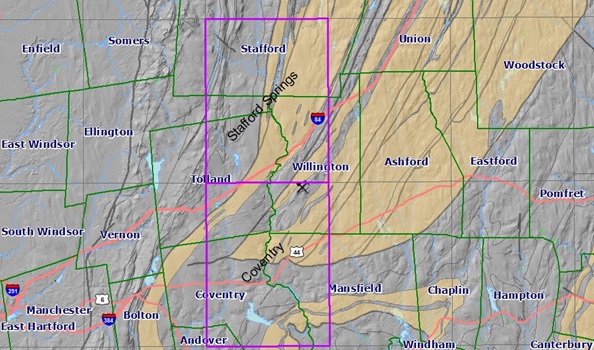 National Pyrrhotite Map
A National Pyrrhotite Map has been prepared by the U.S. Geological Survey, Mineral Resources Program, through a Congressional appropriation amendment introduced by Connecticut Representatives Courtney and Larson (Link to announcement). The map and explanatory text titled Pyrrhotite Distribution in the Conterminous United States, 2020 [Fact Sheet 2020-3017] summarizes what is currently known about the distribution of pyrrhotite across the country. In areas of little data, or insufficient mapping, pyrrhotite occurrences were estimated through association with high grade metamorphic conditions of rock formation, such as in the Appalachians. The publication is accompanied by a data release [Mauk and Horton, 2020].

Model Quality Control Plan for Quarries
In 2019, the Connecticut Legislature formed a Quarry Standards Working Group, with members representing industry, lawmakers, regional councils of government, homeowners, and the University of Connecticut. The working group was tasked with producing a model quality control plan for Connecticut quarries producing aggregate for use in concrete. The Working Group Report, completed in Jan. 2020, stipulates a two-part quality control plan to prevent crumbling foundations caused by sulfide containing aggregate. The plan provides for quarry aggregate documentation and assessment through (1) Geologic Source Reports, and (2) Quality Control Testing prior to authorized use of aggregate in concrete. The following testing supports determination of aggregate use for concrete.

These standards are similar to those used in Canada (Canadian Standards Association, 2019).

A bill raised in the Connecticut State Senate [2020SB-00468] requires quarries producing aggregate for use in concrete to prepare annual Geologic Source Reports. Due to the Coronavirus pandemic, the regular Legislative Session was suspended for 2020, without acting on this proposed legislation.