From Our State Geologist

Margaret A. Thomas, State Geologist
The 2015 winter earthquakes in eastern Connecticut were the most significant geologic events to occur in the State in some time. These seismic events happened in Wauregan, a village in northern Plainfield. From January 8th to February 24th, 2015, a swarm of quakes ranging in magnitude from 2.0-3.3 shook the village. The largest magnitude event [ML 3.3/3.1] occurred on January 12th. These events captured National attention, as recorded seismicity was unknown to the area. Epicenters of the quakes were close to the Lake Char fault, a major geologic terrane boundary, and fault system that extends from southern Connecticut near the Lower Connecticut River Valley, eastward and northward through the State into Massachusetts (map below). It was feared that the fault system was reactivated, and the seismicity being experienced was a precursor to a much larger event. 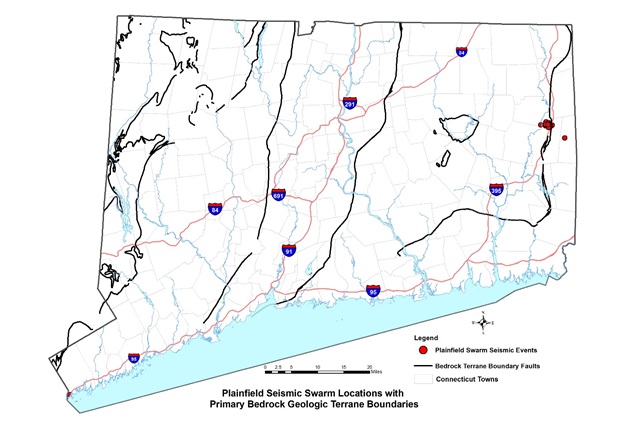 The swarm was preceded by three small earthquakes in October and November 2014 (M Lg 0.9, 0.6, and 0.9), before starting in earnest on January 8, 2015. Local residents experienced the seismic events as loud ‘explosions’ and strong surface shaking. Seismicity was felt throughout eastern Connecticut and all of Rhode Island.
On January 13, 2015, Weston Observatory of Boston College, in conjunction with the Connecticut Geological Survey, of the Department of Energy and Environmental Protection, installed four portable seismographs in the epicentral area to collect detailed recordings of the events. Those instruments operated until the end of September, 2015. Processing and analyzing the data captured revealed at least 180 additional very low magnitude (less than 1.0) “microearthquakes” continued following the initial swarm.  Recorded signals from another 200 detections may have also been very small events, documenting the gradual dissipation of seismicity in the area.
Seismic event locations computed using data from the portable seismic stations were mapped near and within the Lake Char fault zone, at focal depths ranging from about 1.6 km depth to just below the earth’s surface. The seismic events were also located near an abandoned shallow rock quarry. The focal mechanism of the largest event indicates a thrust motion along a fault trending N20°E and dipping 45° to the west. Sequential events appear to have migrated toward the surface along that plane (up-dip) with time.
Surveillance with local seismometers provided a unique opportunity to investigate and map these previously undetected events, and contribute to the understanding of earthquakes in Connecticut. The DEEP, Connecticut Geological Survey and University of Connecticut, Center for Integrative Geosciences are planning further investigations on the relationship of the Plainfield swarm to the regional geologic fault system, structural deformation of rocks in the area, and bedrock fractures in the vicinity to assess regional seismic hazard risk. 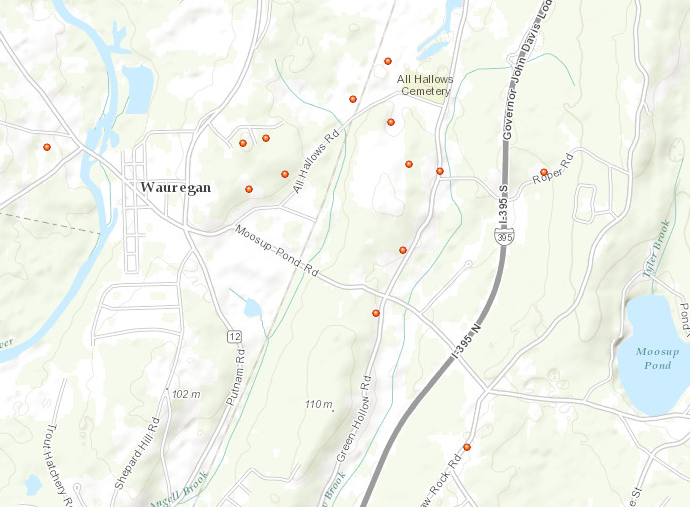