Stay informed about coronavirus (COVID-19): Connecticut residents are urged to continue taking precautions to prevent the spread of COVID-19.

Phase 2 of Connecticut's reopening efforts will take effect June 17. Additional safety guidance for businesses that fall under Phase 2 will be released early next week.

For the latest information and guidance, visit ct.gov/coronavirus.

How Does a DEEP Forester Know Which Trees to Harvest?

Forest management plans may call for (or prescribe) a harvest in a forest stand in order to thin an overcrowded forest, to salvage trees that are dying from disease or insect infestations, or to start a new forest stand (termed "regenerate.") These "prescriptions" often depend on growing conditions and on what is to be accomplished in a given forest. Foresters will often prescribe management that will favor the trees that can best grow on the site. For instance, white pine can thrive in sand and gravel soils, while sugar maple prefers fertile, moist soils. 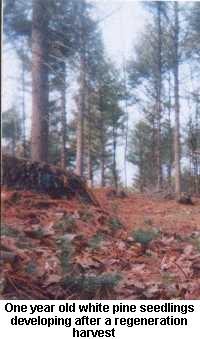 In the photograph to the right, you can see one-year-old white pine seedlings in the foreground beside a stump. They germinated after a stand regeneration harvest that was conducted during a year when there was a good crop of white pine cones.

This system is used to develop a forest stand of uniform age. It works well if the forester wants to favor trees that need a lot of direct sunlight to germinate and grow, such as oaks and aspen. Cutting methods can include:

Clear-cutting: In this method all of the trees, large and small, are cut to stimulate new seedling and sprout growth. In our State Forests, clear cuts are usually done in patches up to ten acres in size.

Shelterwood: In this method, all of the trees are removed from the stand, but in two or three phases, rather than all at once. In this way, the new seedlings can develop in partial shade until they’re ready to be "released" to grow in full sunlight. In the early stages of the shelterwood method, the trees left standing are an "insurance policy," providing a valuable source of seed. 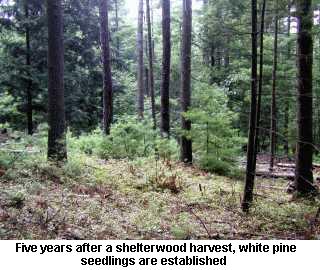 This system relies on "selection cutting" to create, over time, a forest stand with at least three distinct age classes. "Selection cutting" means that individual trees or individual groups of trees are harvested to create small openings in the forest canopy. Small openings allow sunlight to stimulate seed germination, but the crowns of the surrounding trees close the openings within a few years. This system favors tree species that are tolerant of shade, such as sugar maple, yellow birch, and beech.