Native American Use of Prescribed Fire

The forest European settlers found was likely different from today’s forest. This was due to the frequent burns Native Americans often set to make the forest more habitable for themselves. The burns increased grasses which attracted their game animals, increased berry production, made travel easier, reduced pests, aided in defense, facilitated the collection of firewood and acorns as well as numerous other benefits.

Frequent low- and moderate-intensity fires killed smaller trees and larger thin-barked fire-sensitive trees. If the area was not burned for many years, oak and chestnut sprouts would shoot up in gaps in the forest canopy, possibly grow thick fire-resistant bark before the burning resumed, and then might eventually join the older trees in the overstory.

Native Americans may have burned to promote nut producing trees such as oaks and chestnuts. Acorn meal and acorn mush was an important part of their diet. This Native American mortar was probably used to grind acorns into acorn meal and acorn mush. It is approximately 20” wide, 20” deep, and was carved into moss covered bedrock in Union, Connecticut.

Forests near Native American encampments and villages were probably open woodlands with fewer trees than today’s forests and a grassy understory. Oak savannas, grasslands where the fires left only a few trees, was reported on the first 15 miles of the Quinnipiac River starting in New Haven.

Along the coast and major rivers, where more Natives lived, there was so much intense fire in some places that the forest reportedly gave way to grasslands. In the 1660’s, Connecticut Governor John Winthrop said, “Pine knots were all that remained from generations of fallen trees in fields burned clear by the Indians”. Lyme was one of 24 towns in Connecticut settled by Europeans prior to 1650 in openings that were previously cleared by Native Americans. The original settled section of Lyme is now in Old Lyme. Nehantick (a.k.a Nayantick, Niantic) had villages in Niantic (Nehantucket), Old Lyme, and Oswegatchie section of Waterford. They were reportedly a branch, or affiliated, with Narragansetts of Rhode Island. The Nehanticks were also apparently absorbed into the Pequot and Mohegan tribes after the massacres and wars with English settlers in the 1600s. 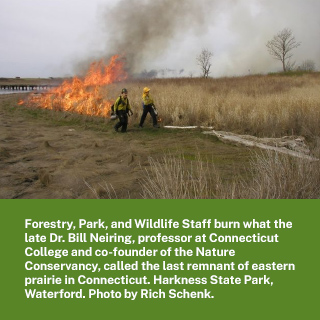 Fires and/or tree girdling with stone axes were used to clear land for planting. After years of use, the planted areas were often abandoned as the soil become less productive and because nearby sources of firewood would be exhausted. The “old land” or “abandoned land” was known as “Tawawag” to the Pequots.  Much of the land cleared by Natives was abandoned as their population was decimated by European diseases and war.

Though the amount of Native American fire has been debated, there apparently had been enough grasslands, savanna, and open woodlands to support large grassland grazers. Bison made it to Massachusetts in the 17th century. Elk bones have been found in Rhode Island. The last elk reported shot in Massachusetts was in 1732.

Further from Native American population centers, there were fewer fires and the forests were more like the dense closed canopy forest prevalent today. The grasslands, savannas, and open woodlands rapidly filled in with trees when the burning stopped, to become dense closed canopy forests. Author Wendell Berry stated, “The forest is always waiting to overrun the field”.

White oaks proliferated with fire. A study of the pre-settlement forest found approximately half of the trees in eastern Connecticut were white oaks. They are among the most rot-resistant of native oaks. Its flaky bark absorbs significantly higher amount of rain from stemflow than other oaks. The moist bark provides added protection from fires. Fire injury would impact red maple the most as it is thinned-bark and rot-prone. Without fire to keep them in check, red maple has replaced red oak as Connecticut’s most abundant tree.

The Flame gets dim

European settlers fired the forest to clear for farmland. By the 1820’s, less the than 30% of Connecticut was covered with forests. The forests repopulated as a large number of farms went out of business. They were repeatedly cut for firewood, charcoal production, and lumber and often burned. In the first quarter of the 1900’s, over 30,000 acres burned annually (for comparison, the town of Lyme is about 22,000 acres). Now less than 500 acres burn in Connecticut most years and the fires are usually less severe. Oaks are not sustained under current natural conditions as the lack of adequate fire has left the forest too shady for oak seedlings to thrive. Though global warming will favor southern species such as the oaks, unless it is accompanied by prolonged severe drought, the forests will likely be too shady for new oaks to succeed. This problem is compounded by excessive deer browse of oaks and proliferation of non-native invasive plants. As a result, there are few viable young oaks to take the place of the older oaks that are dying at a fast rate. This is a major concern, as oaks are very important to wildlife for their acorns.  They also host the most caterpillars and moths which make them extremely valuable for birds. 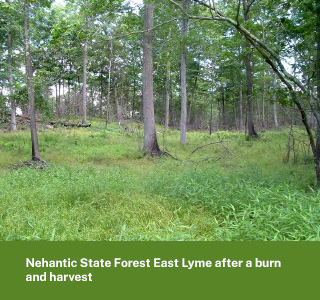 In addition to this site, which DEEP Forestry has been repeatedly burning since 1993, foresters sometimes use a limited amount of prescribed fire in conjunction with harvests to promote new generations of oak. More often, they design harvests to mimic some of the effects of fire.  The harvests of small and large trees are ideally done during an acorn crop year to promote a new generation of oak. Follow-up harvests and cutting of small trees provide more of the much-needed sunlight. Widespread burning is not practicable in a densely populated state. Sustainable harvests are more feasible and can promote pollinators, many species of wildlife that require more open habitat, and carbon sequestration, while providing a renewable source of energy and low-energy intensive building materials.  Much of the wood DEEP uses for picnic tables and projects on the state parks and forests are harvested from the state forests and sawn up at the DEEP sawmill in Portland.