Nehantic State Forest, one of 32 state forests, is over 4,400 acres with parcels located in the towns of East Lyme, Lyme and Salem. The first parcel was purchased in 1926. During the Great Depression, the Federal Transient Bureau built a camp for 300 transients and employed them on projects in the forest.  They constructed the forest road and planted the conifer plantations. The camp’s foundations are still visible behind gate #2 just north of the power lines.

Description: While the letterbox itself lies behind a gated forest road in the town of Salem, access is from East Lyme. The walk is about one and half miles round trip and would take about an hour. It is strongly suggested to wear bright orange during hunting season. The majority of hunting takes place from September to December and in parts of May.

Clues: If you will be coming from the north, at the traffic light on Route 82 and Route 85 in Salem, head south on Route 85 almost 3 miles. At the bottom of a long gradual hill, take a right onto Salem Turnpike. If you are coming from the south, take Route 85 north 1.2 miles from the junction of Route 161 in the Chesterfield section of Montville. Salem Turnpike will then be your third left.

Once on Salem Turnpike, go less than 0.5 miles and take your first left, onto Holmes Road. Holmes Road ends after 1.4 miles at gate #1 in Nehantic State Forest. Park in the parking area on left. Walk 100’ behind gate #1 and take a right onto a dirt and stone access road. As you travel, you will notice the abundance of mountain laurel on both sides of the road. Mountain laurel is an evergreen shrub that is also the state flower and blooms in June. It is often sold for bows, especially during the Christmas season. In places like Nehantic, mountain laurel grows on several hundred acres in almost a monoculture. It provides good refuge for deer but is poor habitat for those birds that feed on the insects that are found on understory shrubs. As these insects have trouble with the waxy leaves of mountain laurel, there are fewer of them on mountain laurel. Mountain laurel also hinders the understory growth of herbs and of other woody vegetation. Among the woody plants hindered by mountain laurel are the young seedlings needed to replace the older trees as they die.

At about 0.25 mile, on the right, the indications of a 2003 prescribed fire has faded away on the right but, on both sides of the road, the 2014 timber harvest along with trees marked with blue paint for a future harvest are very evident. As time passes, the harvest areas will fill in with a new generation of oak seedlings.

The Division of Forestry administers commercial timber harvests as its main management tool for achieving healthy and diverse forests. The DEEP forester marks each timber tree to be harvested and keeps a tally of the total. The accumulated total is then sold for harvest by competitive bid. The winning bidder conducts the harvest under the supervision of the DEEP forester. The harvester brings in whatever equipment is needed to cut, move and load the logs, including chainsaws, skidders and log trucks.

The 2014 timber sale harvested trees designated by the forester. This harvest will sustain the oak forest by providing adequate sunlight for the existing oak seedlings that germinated after the previous harvest. Oak grows optimally in full sunlight. If there is too much shade, oak seedlings will eventually die out as more shade tolerant saplings and shrubs overtop them. Full sunlight also makes it more likely that the oak seedlings will grow past the reach of voracious deer and continue to grow into large, mature trees.

The blue paint marks at the base of the trees allow the forester to verify that the only trees harvested were those he marked. When far from the road, logging residue is allowed to remain in place, providing valuable nutrients to the soil, habitat for wildlife and food source for insects and other organisms in the food chain. 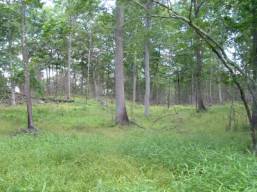 a grassy opening on the right, just before the access road goes up a short, steep hill. The opening is from the logging operation. Skidders brought logs to be picked up by self-loading log trucks. This opening is a temporary marker of this harvesting activity. The opening has re-vegetated naturally to deer tongue, a native warm season grass that was prevalent in Connecticut prior to European settlement.

The forest also has a grassy understory that replaced the mountain laurel and woody shrubs as the dominant understory vegetation type after the harvest and fire. The forest prior to European settlement may have looked more like this than the dense forest of today. Native Americans burned the forest frequently to make their environment more habitable. They burned to improve forage for their game animals, increase berry production, facilitate fuelwood and acorn collection, and to make travel easier.

At 0.5 miles, go right on an old grassy woods road after the top of the short steep hill. This pre-existing road was used as a skid trail during the recent harvests. The disturbance from the skidding promoted the natural seeding of grasses into this area. Seed for these grasses come from the surrounding forest and fields. These grasses host a broad range of insects that make up an extremely important food source for migratory birds on their fall journey back to the tropics. This range of insects is greater than would found in an undisturbed forest. On your left, you will also notice waist-high mountain laurel that re-sprouted after the 1995 harvest.

At 300’ since turning, you will come to a large mud hole. On your left is a vernal pool. A vernal pool is a seasonal wooded pond that does not have a continuous brook that flows from it. Vernal pools such as this are the most productive source of wildlife habitat in the upland forest, as they are the breeding grounds for salamanders, frogs, fairy shrimp and wood ducks.

At 1000’, another skid trail branches left down a small hill. Do not take this trail.

At 1200’, you will come to a group of dense young trees, 5” to 7” in diameter. This sapling oak stand (with some planted larch) that grew after a 1985 clear-cut. Since oak cannot tolerate too m 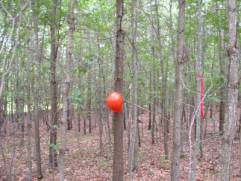 uch shade, new generations of oak grow optimally after the existing stand is completely harvested. Without severe disturbances providing openings and, hence, sun at ground level, the oak population in the forest would eventually die out due to the lack of young oaks in the understory. For the most part, oaks survived for the last 8,000 years in Connecticut because forest fires were much more prevalent. Today, on average, forest fire returns to a specific area of forest once every 3,000 plus years. Historically, on average, fire burned an area at least once every 35 years.

In addition, the shrubby, young forest that develops after a severe disturbance provides important habitat for wildlife. Populations of species such as the blue winged warbler, chestnut sided warbler and New England Cottontail have been in a precipitous decline in Connecticut, due to the loss of this type of habitat. Since the young forest outgrows its usefulness for these species within 10 to 15 years, foresters continuously create more of this young, shrubby forest  for these species.

At 1300’, you will come to a stone wall. On the other side of the stone wall you will notice widely spaced large oaks, numerous oaks saplings, and the remains of many small and mid-sized trees that were felled. These birches and maples were cut down because they were choking out the oak saplings. The large oak trees are not as much of a problem for the oak saplings because they are fewer in number than were the birch and maple saplings. The balance of ages in this forest stand is closer to that which might occur in an old growth oak forest in which forest fires are relatively infrequent.

Follow the stone wall to the left (west) about 50’ to where part of the wall fell over to the south. In a void under a rock from the wall, you will fulfill your quest.

LEARN MORE, EARN A PATCH: Your walk has led you to consider some issues confronting sound forest management. These issues include the challenge of getting new generations of trees to develop through a dense understory of mountain laurel and that of sustaining habitat for animals that use young forests and disturbed forests.

This is one of 32 letterbox hikes that is being sponsored by the Connecticut Department of Energy and Environmental Protection’s Division of Forestry. When you have completed 5 of these sponsored letterbox hikes, you are eligible to earn a commemorative State Forest Centennial patch.

When you have completed five of these hikes, please contact us and let us know what sites you have visited, what your stamp looks like and how we may send you your patch.  We will verify your visits and send the patch along to you.  Contact DEEP Forestry