Natchaug State Forest includes over 13,200 acres in six towns (Ashford, Brooklyn, Chaplin, Eastford, Hampton and Pomfret). Bigelow Brook and the Still River unite at Phoenixville in Eastford to form the Natchaug River. This area was part of the hunting grounds of the Wabbaquasset Indians, a subject tribe of the Mohicans. Natchaug means “the land between the rivers”.

The first purchase of land by the State for this forest was in 1917. It was originally called the Eastford Forest. Civilian Conservation Corps Camp Fernow was located in the Natchaug Forest from 1933-41. Extensive road and recreation area development work was done by the CCC boys in the forest, most notably construction of the bridge over the Natchaug River. Originally made of stone and timber, it was damaged by the flood of 1936, then rebuilt and strengthened with steel.

Natchaug has an extensive trail system with trails for hiking, horseback riding, cross country skiing and snowmobiling. The Natchaug Blue Trail connects with the James L. Goodwin State Forest, which abuts the Natchaug State Forest to the south.

Except for softwood plantations made by the CCC, Natchaug is dominated by hardwoods, although there is some naturally-seeded white pine and hemlock growing in the forest.

Description: The letterbox is located in a stonewall on the “CCC Trail”, a blue/yellow blazed trail recently constructed by the Connecticut Forest and Park Association as part of the Connecticut Blue Trail System. The hike on the trail to the letterbox is about one mile, for a round trip of about 2 miles – or a loop hike of 3.1 miles can be done. Bring a topographic map of the area and a compass with you if you decide to do the loop hike or get off the trail and explore a bit. Wearing bright orange during deer firearm hunting season (November and December) is strongly advised.

Clues: As of November 1, 2005 the Natchaug Bridge built by the CCC on Fernow Road was closed to vehicle. This bridge, off State Route 198 between Chaplin and Eastford, leads to the main forest entrance. So, to reach the forest and the CCC trail you must travel north on State Route 198 and turn east onto General Lyon Road. This road is a short distance south of Route 44 in the Phoenixville section of Eastford – don’t go too far!  From General Lyon Road turn east onto Pilfershire Road. You’ll cross the Still River and head uphill for about 1.7 miles where you bear right onto Kingsbury Road. After you go past the General Lyon Memorial and the Natchaug State Forest Headquarters buildings, turn right onto Fernow Road. Continue down Fernow Road over broken asphalt for about 1/3 mile. The CCC trail starts at a small parking area on the left (south) side of the road about a tenth of a mile east of the Natchaug River. There is a sign posted at the trailhead.

The trail heads generally south. About 220 feet from the start is a 17” dbh  (diameter at breast height – the diameter of the tree 4.5’ above ground level) red oak with a blue/yellow blaze. Continue on the trail 25’ past the oak, then stop and look back over your left shoulder. You’ll see an old road heading back toward Fernow Road. You will also see that the trail, as it continues to the south, is on this old road. The road led to a cabin built in 1926-27 to house crews and equipment during the early development of the forest. You will come to the remains of the cabin in a few hundred feet, right after crossing three footbridges.

Below are two photographs of the cabin taken in the 1930s. The first was taken from between the river and the cabin, looking up at the front of the cabin. The second is a side view, probably taken from near the closest footbridge.  Can you find the remnants of the stone piles which once supported the cabin? 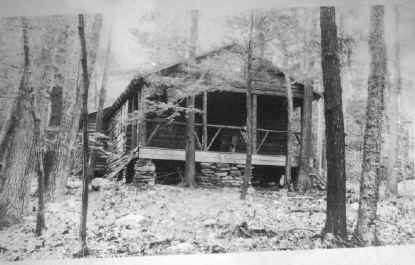 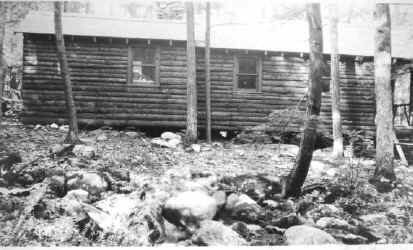 The area of the forest you have walked through so far is a mature hemlock stand, with some hardwoods as well. Notice that in the small opening in the forest where the cabin used to be are some pole-size (7”-11” DBH) bigtooth aspen, yellow birch and black birch. The sunlight conditions created by an opening of this size were conducive to seedlings of these tree species. A smaller opening would have favored the more shade-tolerant hemlock and sugar maple seedlings. A larger opening allowing in full sunlight might have included some oaks. Oak seedlings require almost full sunlight to continue growing through the sapling (1”-6” DBH) and pole stages into sawtimber size (>11” DBH). In this small opening, the oak seedlings lost the competition to the aspens and birches.

Past the cabin, the trail heads down toward the Natchaug River and runs along the river for about 500’. At the point where the trail leaves the river’s edge is a 42” DBH white pine. This tree is probably no older than the other large trees in the area, but has grown rapidly due to good soil and plentiful water, and from the lack of competition from other trees on the side towards the river.

Notice that you are now in the floodplain of the Natchaug River.  Look around for leaf and debris dams which illustrate how water moves through the area during periodic floods.

As the trail continues southeast you’ll pass a 26” DBH hemlock with a lightning scar.  The spiraling orientation of the scar illustrates that is was caused by lightening rather than frost.  Soon after the lightning-struck hemlock, you will cross Beaverdam Brook. This drainage is an interesting area topographically and in terms of vegetation. Depending on the timing, track, strength and speed of the next major hurricane to hit Connecticut, this area may grow into what would be considered an old growth hemlock stand. You might consider getting off the trail and exploring this area a bit at some point in your hike.

Past the stream you head uphill and enter a hardwood stand dominated by oak, along with some white pine. Where you head back downhill the trail ties into an old forest road. As the trail nears the river again you’ll see a private campground across the river. In a short distance the trail crosses an open brushy area.  This is the site of an underground natural gas pipeline.  The brushy understory cover supports wildlife species which are less common in the adjacent maturing forest.  A couple hundred feet south of the pipeline you’ll see a vernal pool between the trail and the river. The vernal pool is situated in what appears to be a kettle hole (a kettle hole is a hollow created by the melting of buried blocks of glacial ice.) The vernal pool should be full of water in the spring and dry by mid-summer.

The trail then heads back uphill. Soon you'll enter an area that had a thinning harvest in 1980.  Evidence of the old harvest is somewhat scarse.  Adept observers may notice a difference in age-class diversity as the thinned stand supports more small diameter trees than the adjacent woods.  This age-class diversity fosters broader wildlife utilization as songbirds which nest in the middle canopy will have more habitat options here.

Continue undulating up and downhill on the trail for several hundred feet.  When you come to a 23" DBH white oak next to a stonewall, at the State Forest boundary, you'll be near the letterbox.  It is in the wall under a flat stone at a 45-degree angle, 25' northwest of the white oak.

To complete your hike, you can retrace your steps, or complete a loop by continuing on the blue/yellow trail. In about 500’ the trail heads uphill to the northeast along a dirt road for about 0.4 mile, where it meets the Blue-blazed Natchaug Trail. Turn left (north) onto the Blue Trail. In one mile the trail hits Kingsbury Road. Turn left (north) and in about a tenth of a mile you’ll be at Fernow Road to complete the 3.1 mile loop.

An alternative to doing a loop this way is to get off the Blue Trail after you have been on it for about ½ mile and head cross-country generally north to cross Beaverdam Brook and reach Fernow Road soon after. This will allow you to explore the Beaverdam Brook area if you wish.

Learn More, Earn a Patch: Your hike has brought you through an area of forest replete with history, interesting geology, ecology and wildlife, recreational opportunities, and forest management issues and opportunities – a lot for anyone to learn about and enjoy. This is one of 32 letterbox hikes sponsored by the Connecticut Department of Energy and Environmental Protection’s Division of Forestry. When you have completed five of these sponsored letterbox hikes, you are eligible to earn a commemorative State Forest Centennial patch.

When you have completed the five hikes, please contact us and let us know what sites you have visited, what your stamp looks like and how we may send you your patch. We will verify your visits and send the patch along to you. Contact DEEP Forestry