Cockaponset  State Forest, one of  32 state forests, contains over  16,000 acres with parcels located in the towns of Haddam, Chester, Deep River, Killingworth, Durham, Guilford, Madison, Clinton, Westbrook, Middletown and Middlefield. The first parcel purchased for the state forest was in 1926. During the Great Depression (1930s), there were two Civilian Conservation Corps camps in the State Forest, one in Madison and the other in Haddam. The CCC boys constructed the forest roads, thinned the forest, fought forest fires, and planted the conifer plantations. Today, the forest is actively managed for wood products and to maintain forest health and a diversity of wildlife habitat. Available recreational opportunities include hiking, cross-country skiing, fishing, snowmobiling and hunting. Additional information may be obtained at the Eastern District HQ, Route 66, Marlborough. 860-295-9523.

Description: The letterbox lies off the blue trail in Haddam. The hike is almost one mile round trip. Estimated time for the round trip is under one hour. The terrain is flat. Please Note:  Wearing bright orange is strongly encouraged during hunting season (mostly in September through December and much of May). Also, forest roads are not plowed in the winter. Please add an extra mile to your trip planning if snow covered gravel road forces you to park before the pavement ends.

Directions: Take exit 8 off Route 9 in Haddam, go east and immediately take your first right onto Weiss Road. Take a right on Filley Road at the end of Weiss Road. Follow Filley Road under Route 9 and then up a steep gravel road (impassable without 4 wheel drive if snow covered) until you come to Jericho Road (wooden sign post) on your right. Take Jericho Road about 0.1 mile to where the blue trail crosses the road. There are several wooden posts at this location.

Clues: Take the blue trail south (left side of the road). Shortly after you begin, you should notice that all the mountain laurel stems have been killed, but their waxy leaves have re-sprouted at the base of the dead stems. The mountain laurel was top-killed by a prescribed fire in 2003. This burn was conducted by DEEP as part of research being done by the Connecticut Agricultural Experiment Station. The research will provide information on fire behavior and on the effects of fire on the future composition and structure of the forest. In such a fire, mountain laurel leaves can be extremely volatile. Forest fires are uncommon in Connecticut today, with usually less than 1,000 acres burned on an annual basis. This was not always the case. Native Americans and early Colonial farmers often burned the forest to clear land for agriculture and improve the grazing value of the forest for domestic and game animals. The prevalence of fire carried on into the industrial era.  In 1915, over 100,000 acres burned in Connecticut. Fire has had a profound effect in the historical development of Connecticut’s forest and was a major determinate of the tree species that occupy today’s forest. 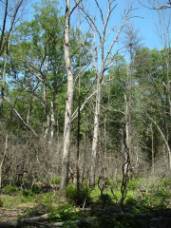 At 250’, you will see several fire killed oaks that have been cut down near the trail. You will also see a patch of dead standing oaks and a couple of white pines farther from the trail. The dead trees near the trail were cut down because they posed a hazard to hikers. Others farther from the trail were cut as a part of a training exercise for arborists. These trees died because the fire in this area was higher in intensity than in the rest of the burn. The overstory oaks in the rest of the burn area survived due to their thick bark.  This bark insulated the cambium, the living layer of cells underneath the bark, from the heat of the fire. The fire gave an opportunity for blueberries to flourish and white pine seedlings to germinate.  Unlike the white pine, oaks and other hardwoods can re-sprout after they are top-killed if they are not too old and there is not too much shade.  In this instance, the smaller and young red maple that occupied the mid-story re-sprouted while the older and larger oaks did not.

If you count the annual rings of the oak stumps, you will find that they were approximately 130 years old. You will need good eyes to do this, as there are about 28 very narrow rings to be found in the outer inch of the wood. This indicates extremely slow growth in the last three decades of this tree’s life. Slow diameter growth is one of the first signs of decline in tree health. The crowded forest, advanced age, and drought-prone sandy soils have all contributed to the very slow growth.

At 600’, a large depression in the ground forms a seasonal pond known as a vernal pool. The relatively flat terrain surrounding the depression is from glacial outwash. The sand and gravel that characterize this outwash were deposited by glacial melt water. Glacial outwash typically has few surface rocks. The depression was probably formed by a large chunk of ice that broke off from the glacier and settled in this spot, preventing the melt water from depositing its burden of sediment. 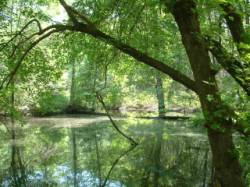 The vernal pool is the most productive of upland wildlife habitats. Vernal pools are an important breeding ground for amphibians such as frogs and salamanders. Vernal pools have no outlets and dry up in the late spring or summer. As such, fish that would prey on amphibians do not inhabit these pools. 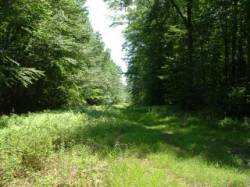 At 400’ since leaving the blue trail, the access road reaches an intersection with another unimproved access road. Looking to your right you will see a long narrow grassy strip that dissects the forest canopy. This is a wildlife strip that was constructed around 40 years ago to provide grassy habitat for deer. The forest is slowly choking out the opening as the canopy grows together. Do not go towards the wildlife strip. Instead, take a left at the intersection.

At 600’ since leaving the blue trail, the access road intersects with another unimproved access road. Take a right onto this new road. As you walk down it, you will notice several rows of larch on the right. The larch, a conifer that drops its needles each fall, was planted in what was once another long and narrow wildlife strip. As you proceed, you may notice a harvest that occurred in 2000 on the left side of the road.  Larch seeded in after the harvest from the planted trees on the other side of the road. The objective of the harvest was to perpetuate a new generation of oak. Even though oak dominates much of the overstory in the state forests, healthy new generations of oak are lacking because these shade sensitive trees can only develop after disturbances such as fire, hurricanes or harvests. Harvests mimic natural disturbances in that they allow enough light to reach the forest floor to stimulate oak regeneration.  A secondary objective was to create scarce young successional forest habitat. Numerous species of birds such as chestnut-sided warblers and blue-winged warblers require the shrubby growth that comes in after severe disturbances for their habitat.

Regeneration harvests that harvest most or all the existing trees provide a source of this important but diminishing habitat.The extent of young forest habitat has been greatly reduced in Connecticut because of the steep reduction in the number of severe fires, because there are not enough clearcuts that would also lead to young, regenerating forests and because of the relative lack of fields from recently abandoned farms reverting to forest. 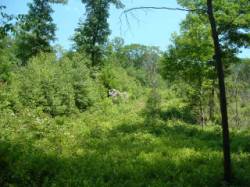 At 1,300’ since leaving the blue trail, you will see a grassy path just wide enough for a vehicle going up the hill on your left. As you face the trail, you will notice that for the most part, the vegetation on the left is an impenetrable wall of dense birch and maple saplings. On the right side of the path, the vegetation is shorter with only an occasional taller tree. A prescribed fire was implemented on the right side in 2003 in order to knock back the faster growing birch and maple and allow the oaks to better compete. The fire also stimulated huckleberry so it could flourish in the areas where mountain laurel had dominated. Researchers from the Connecticut Agricultural Experiment Station are also monitoring the results of this burn.

Turnaround with your back facing the path going uphill and you will see a 22-inch diameter Scarlet oak about 40’ from the unimproved access road. Scarlet oak usually has several short dead branches on the trunk. Behind the Scarlet oak is a small pile of rocks and your search should end as you lift the top rock. (By the way – if a rock pile on flat terrain formed by glacial outwash looks out of place, your hunch is correct.  Surface rocks are uncommon on glacial outwash soils. The forester trucked these rocks in from down the road to hide the letterbox.)

Learn More, Earn a Patch: Your walk has led you a pivotal issue confronting sound forest management: that of providing the range of forest environments that historically would have been in a forest, in order to promote all species of plants and animals native to the area. This is one of 32 letterbox hikes sponsored by the Connecticut Department Energy and of Environmental Protection’s Division of Forestry. Take 4 additional sponsored letterbox hikes to earn a commemorative State Forest Centennial patch

When you have completed the five hikes, please contact us and let us know what sites you have visited, what your stamp looks like and how we may send you your patch.  We will verify your visits and send the patch along to you. Contact DEEP Forestry