The gypsy moth first came to North American around 1868. Its natural range is in Eurasia. In Europe, the moth has been known to be a problem since at least the 1600's. Here in North America, it has found a niche and is established in the northeastern parts of the United States and adjacent parts of Canada. It continues to spread west and south - states such as Minnesota have ongoing programs that seek to prevent the insect from invading their woods. 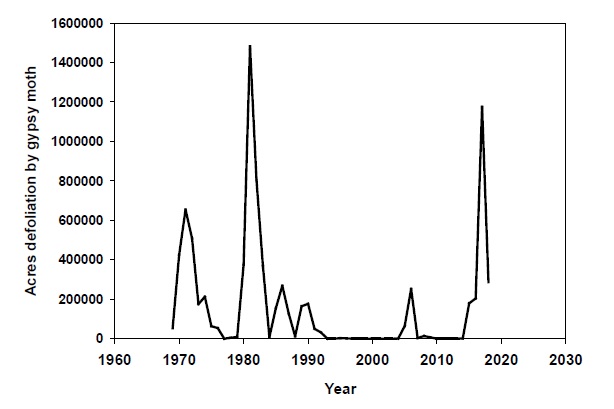 However, the gypsy moth has the ability to go into outbreak mode at regular intervals. In Connecticut, 1971 and 1981 are remembered as particularly bad years. In 1971, defoliation topped 650,000 acres, while in 1981, that number reach 1.5 million acres. That is nearly 80% of the state's 1.9 million acres of forestland.

It is not known for certain why the gypsy moth goes into outbreak mode. One hypothesis ties the start of an outbreak to a low year of mast production. 'Mast' refers to the accumulated seeds of forest trees such as acorns, beech nuts and hickory nuts. In the forest, mast is the primary food for a variety of wildlife, including white-footed mice (Peromyscus leucopus). When the gypsy moth population is at a reduced level, these mice are able to keep the moth population down by feeding on a proportion of larvae and pupae. While this feeding by the mice helps keep the gypsy moths in check, it does not substantially influence the number of white-footed mice, as the gypsy moth is not a critical food source for the mice. 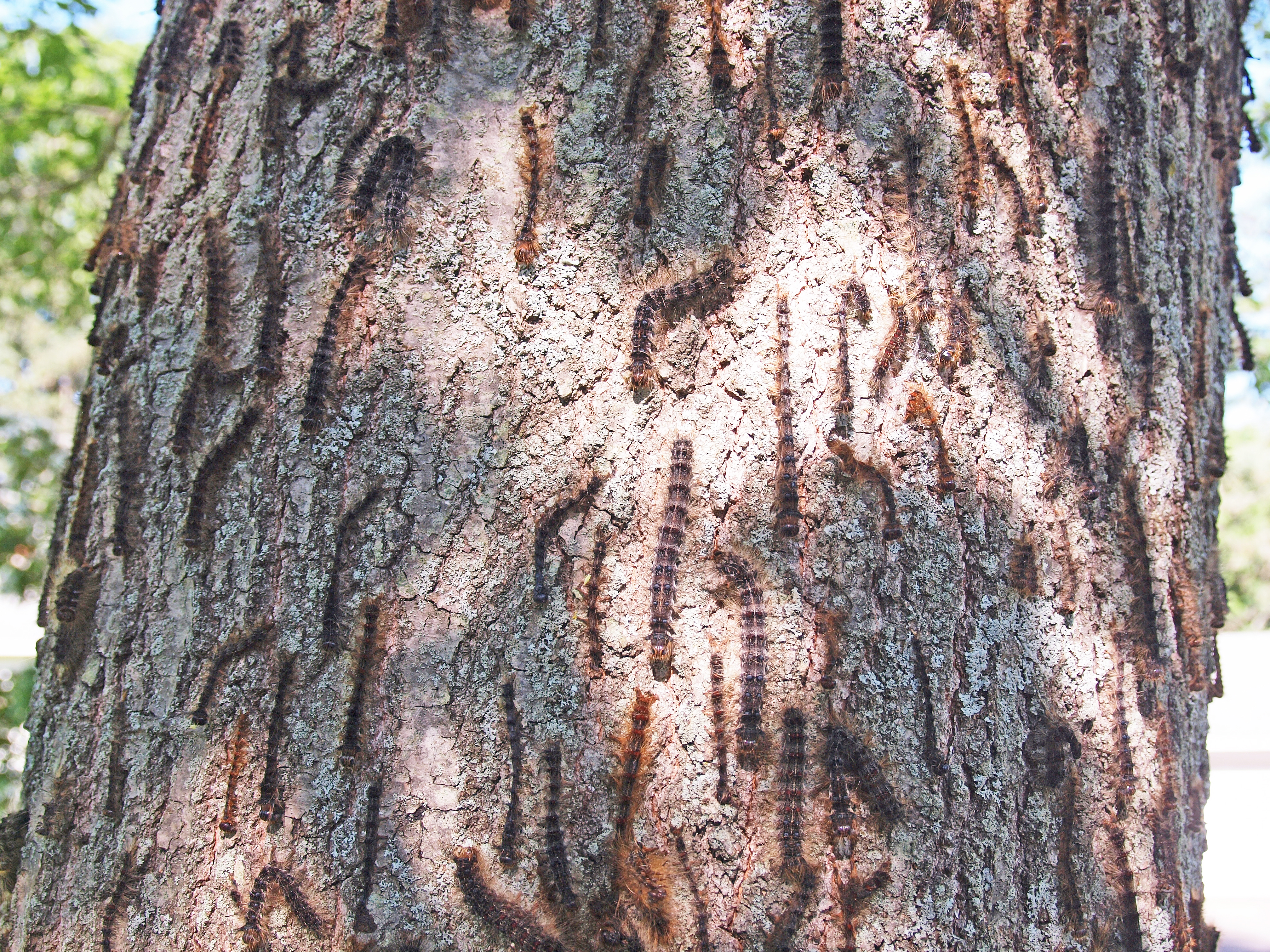 most of these caterpillars are dead, killed
by the maimaiga fungus

The emergence of the maimaiga fungus (Entomophaga maimaiga) in 1989 changed this dynamic greatly. This fungus is originally from Japan. It was released several times in the US as a potential biological control agent, going back to 1910. After each trial, its effects on gypsy moths appeared to be minimal. That is, until 1989. In that year, to the surprise of everyone, this fungus emerged from oblivion and immediately began killing gypsy moth larvae on a wide scale.

The first known occurrence of this happening was in Connecticut. The spring of 1989 was exceptionally wet in the state. Since that year, in Connecticut, the fungus has re-emerged each year on its own, proving that it is able to sustain itself in the wild.

As it turns out, starting around the 3rd instar, the gypsy moth caterpillar spend a significant amount of time on the ground, as they seek shelter during the hotter parts of the day. When these larger caterpillars begin descending to the ground, these activated spores have no problem finding and infesting them.

After being infested with the maimaiga fungus, a certain number of the caterpillars begin to climb back up a tree before succumbing to the fungus. From this perch, as the dead caterpillar decomposes, the fungus releases a second, wind-borne type of spore that spreads of the disease even further among the surrounding gypsy moth caterpillars. Once it gets going, the fungus tends to move quickly through the population. (See a video of the fungus in action.)

This cycle of infection by the maimaiga fungus has kept the gypsy moth population in Connecticut at a low level for the past two-and-half decades. Each time the population of the insect began to grow, this fungus has managed to prevent it from becoming anything more than a localized outbreak.

That is, until the recent drought.

Note that rainfall for the spring months is below average in both 2015 and 2016.
Chart created using data collected by the CT Agricultural Experiment Station.

Much of Connecticut suffered under drought conditions in 2015 and 2016. At the same time, the number of localized gypsy moth outbreaks increased and began to spread. This increase is attributed to the maimaiga fungus not being activated. In 2017, the spring was wetter than in the previous two years. These spring rains led to the maimaiga fungus being activated. However, the activation of the fungus was later in the season than expected. The slow activation of the fungus allowed the gypsy moth caterpillars to survive well into the early summer. Areas in eastern Connecticut suffered extensive defoliation. (See the CT Agricultural Experiment Station's Gypsy Moth Fact Sheet for further details.)

While the number of gypsy moth egg masses counted by the CT Agricultural Experiment Station at the end of the 2017 season were down from the previous year, significant oak mortality continued into 2018 due to the one-two punch of defoliation and the drought having significantly weakened the trees. This set them up for further damage and even death from secondary pests and pathogens, such as the two-lined chestnut borer and the armillaria fungus. Oak mortality from these secondary pathogens continued on into the year 2019 and possibly will continue on into 2020.

There is one other aspect of the forest mast, mice and gypsy moth story that deserves mention. White-footed mice are known to be a main reservoir for the bacterium that causes Lyme disease. While the number of gypsy moth larvae or pupae tend not to affect the mice population directly, the gypsy moth does tend to influence how well the oaks and other forest trees produce their seed crops. A sufficiently large outbreak of the gypsy moth can lead to a decreased forest mast crop in the subsequent years, which will then lead to a decrease in the number of deer mice in the forest. As a result, gypsy moth outbreaks have been associated with declines in the number of local cases of Lyme disease.

The Gypsy Moth in Connecticut - An Overview