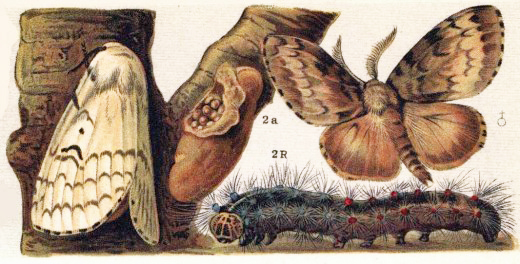 'Gypsy Moths' from the Swedish Encyclopedia
Nordisk Familjebok, circa 1910.

Originally native to Eurasia, the gypsy moth is an invader to North America. By the 1600's, it was already being noted to cause problems. By the 1800's, it was a prominent pest in Europe; one that had spread widely and was causing the same sort of damage there as it is now known for on this side of the Atlantic.

Unlike most invasive insect pests, we know where and how the gypsy moth was brought to North America. In the 1860's, several entrepreneurial individuals had a keen interest in developing a silk industry in the United States. Disease had hit the traditional silk moth (Bombyx mori) and the Civil War was affecting the availability of cotton. These young men, well skilled in entomology, were experimenting with various species of moths that might work as a source of silk fiber. Among the places where people sharing this interest congregated was in greater Boston.

In 1868 or 1869, one of these young moth-enthusiasts in Medford, MA - Etienne L. Trouvelot - received a shipment of potential silk moth candidates from a colleague in France. The shipment, whether by accident or on purpose, included some gypsy moth eggs. Mr. Trouvelot began rearing these gypsy moths in his backyard and some escaped. That is where the story of the gypsy moth begins in the United States.

Since then, the gypsy moth has woven its way into many different narratives. Early efforts to control this insect were notable for their aggressiveness as well as their ultimate failure. These efforts encouraged a reliance on the use of pesticides that, in turn, influenced early approaches to the practice of arboriculture in this country. This historic pesticide use here stands in contrast to use in other places, such as Europe. Perhaps this is most notable in the use of DDT. Following World War II, DDT was used widely in the effort to restrict the spread of the gypsy moth. The goal was to 'hold the line' at the Hudson River, to keep it from spreading westward across the river and on through to New Jersey and Pennsylvania.

In the years following the halt in the use of DDT, the gypsy moth reached some of its greatest population numbers, culminating in Connecticut with the extensive outbreaks of 1971 and 1981. Those outbreaks are legendary in both forestry and arboricultural circles. A wide range of tree species were stripped clean and the woods were turned bare due to the extensive feeding of these insects. Arborists were hard-pressed to meet the demands of an increasingly frantic public, as the caterpillars covered houses, roads and sidewalks. The gypsy moth caterpillars were even blamed for traffic accidents, as people would skid on their massed numbers in the roadways.

The role of the maimaiga fungus in controlling the insect is critically important. In the end, it is somewhat ironic that, after all of the efforts in chemical control, it is a biological control that has proven most effective. The maimaiga fungus was deliberately introduced in North America in order to control the gypsy moth, even though its effectiveness only became apparent after a gap in time.

The limited precipitation that occurred in Connecticut in 2015 and 2016 allowed the numbers of the gypsy moth to begin increasing again. 2017 turned out to be another difficult year for trees attacked by the gypsy moth, particularly in the eastern half of Connecticut. In 2018, the extent of the outbreak declined significantly, but the secondary pests that follow the gypsy moth and further damage or kill stressed trees, showed themselves to be a problem. Chief among these secondary pests are the two lined chestnut borer and the honey fungus (also known as armillaria or the shoestring root rot).

The History and Impact of Gypsy Moth in North American and Comparison to Recent Outbreak in Europe, 2007, Michael McManus and Gyorgy Csoka

The Great Gypsy Moth War - A History of the First Campaign in Massachusetts to Eradicate the Gypsy Moth, 1890-1901, by Robert J. Spear, published by the University of Massachusetts Press

The Gypsy Moth in Connecticut - An Overview