The Spotted Lanternfly and Connecticut

Learn how to identify it and what to do if found.

Where It Is Now

Why the SLF Is of Such Concern to Connecticut

Trees At Risk and How It Affects Trees

Indications that the SLF May Be Present

What to Do If You May Have Found SLF 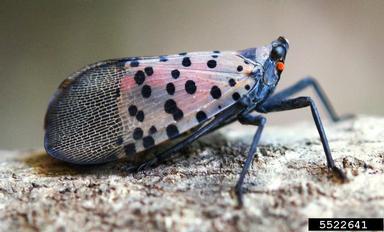 The spotted lanternfly (Lycorma delicatula) adult is approximately one inch long and one-half inch wide with large and colorful wings. The front wings of the spotted lanternfly are light brown with black spots in the center. Their hind wings have contrasting patches of red and black with a white band in between. The legs and head are black; the abdomen is yellow with broad black bands. 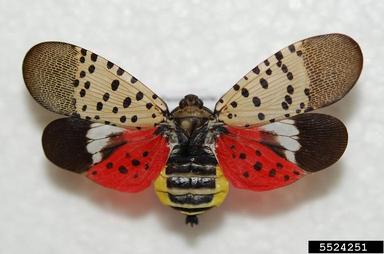 The three immature stages, called nymphs, are black with white spots. During the fourth and final nymphal stage, the developing insect adds red patches and small wing pads. Only the adult stage has wings. 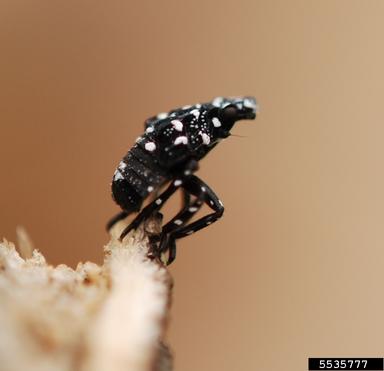 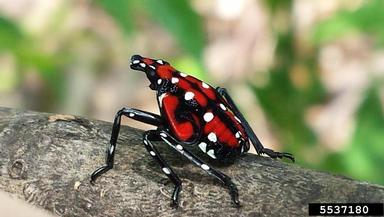 The SLF is a planthopper of the family Fulgoridae, a family known for their bright colors and their pronounced snout-like head structure. SLF is considered to be native to China, India and Vietnam. It can walk, jump, or, as an adult, fly short distances. However it is a hitchhiking insect. It lays eggs on almost any surface, including vehicles, trailers, outdoor equipment, and patio furniture, and can be spread long distances when people move infested material.

SLF lays its eggs in the fall on smooth host plant surfaces and on non-host material. Bricks, stones, and dead plants can all serve as egg laying sites. Eggs are laid in masses of 30-50 eggs, with the individual eggs yellowish-brown in color. The egg mass itself is covered by a gray, waxy coating that is very indistinct. Eggs hatch in the spring and early summer, and nymphs begin feeding on a wide range of host plants by sucking sap from young stems and leaves. Adults appear in late July and tend to focus their feeding on tree of heaven (Ailanthus altissima) and grapevine (Vitus vinifera). 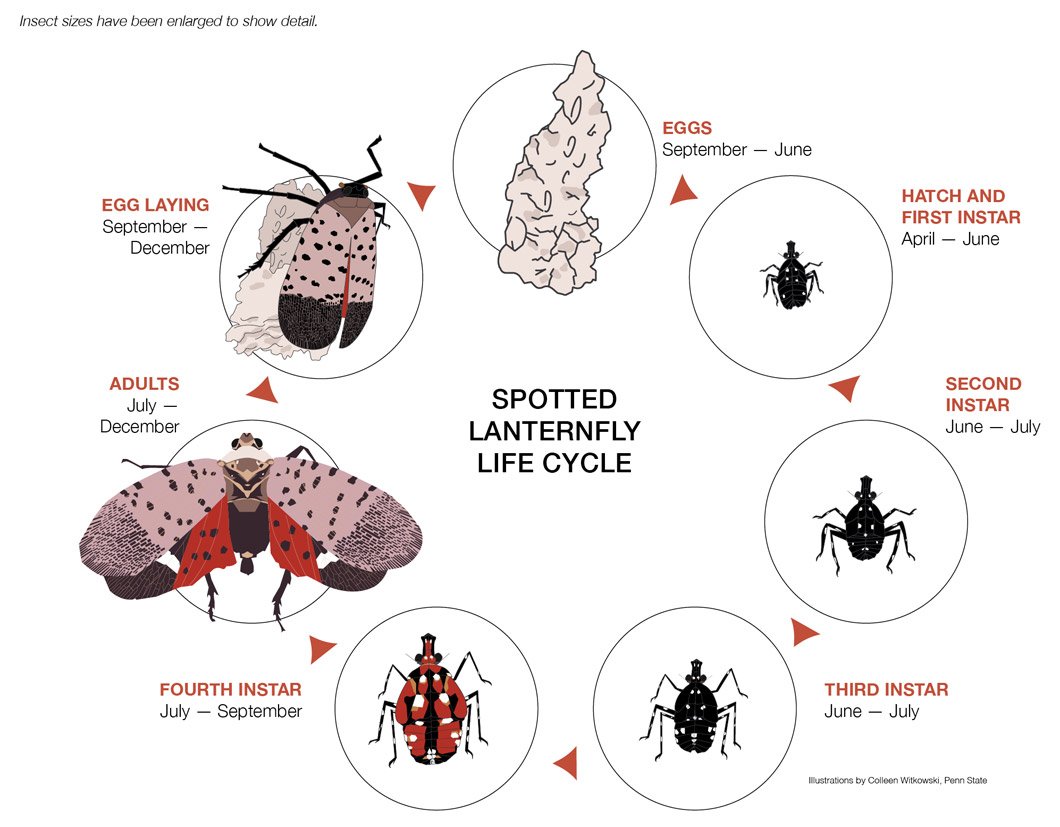 Where It Is Now

The SLF likely arrived in North America hidden on goods imported from Asia. The first detection of the spotted lanternfly in the United States was in Berks County, Pennsylvania in September 2014. SLF has now spread throughout southeastern PA with established populations in New Jersey, Delaware, Maryland, West Virginia and Virginia. USDA APHIS has not placed a federal quarantine in any state as of yet, but warns that the spotted lanternfly could survive year-round on the farmlands, forests or urban areas of most states in the northeast part of the country. The Commonwealth of Pennsylvania updated an Order of Quarantine and Treatment as of March 2020 and the NYS Department of Agriculture and Markets has established external quarantines on areas with infestation. Single SLF adults have been found in New York, Massachusetts, and Connecticut; however no infestations have been reported in these states as of August 2020.

Why the SLF Is of Such Concern to Connecticut

The SLF is an insect with a large and diverse host range. It feeds on about 60 genera of the trees and plants found in North America. In Connecticut, approximately 47% of the forest trees are considered as potentially susceptible to the SLF (See Tree List). Many of the fruit trees grown in Connecticut, such as apples, cherries, and peaches, are also considered to be vulnerable. Even if the insect does not kill the trees, it could destroy the value of the fruit. Grapes are likewise vulnerable. The impact on the agricultural industry of Connecticut could be devastating.

The degree of impact of the SLF on Connecticut's urban and rural forest trees is uncertain. It may turn out to be more of an annoyance with minor impact on forest health. However, there is the potential that it could cause much more significant damage.

Trees At Risk and How It Affects Trees

Both nymphs and adults of the SLF feed by sucking sap from the stems and leaves of host plants. Depending upon the severity, this can weaken and damage the plant by reducing photosynthesis. 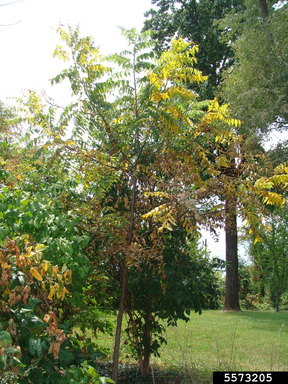 Their feeding also creates a sticky, sugary residue called 'honeydew'. This honeydew attracts other insects and promotes the growth of a black mold called 'sooty mold', which can further damage the plant by blocking photosynthesis in the leaves of plants coated with the excrement.

The honeydew itself is sticky, unsightly and hard to get rid of which is why SLF poses such a problem to fruit farmers. The presence of the honeydew can destroy the value of the crop.

The invasive tree of heaven is the preferred host plant for SLF, but it also feeds on a wide range of crops and plants, including grapes, apples, hops, walnuts and hardwood trees. The potential range of hosts is one of the reasons why SLF is of such great concern and may be so difficult to combat. Altogether, there are about 60 genera of trees and plants that SLF is known to attack in North America.  To date, states with heavy SLF infestations have only seen SLF kill sapling trees, sumac, grapevines, and tree-of-heaven.  Healthy and established ornamental trees have not been recorded to have died from SLF, though canopy dieback and plant health decline has been observed.

The following are among the genera at risk from SLF:

Indications that the SLF May Be Present

Depending on the time of year, a different life stage of the spotted lanternfly will be present. 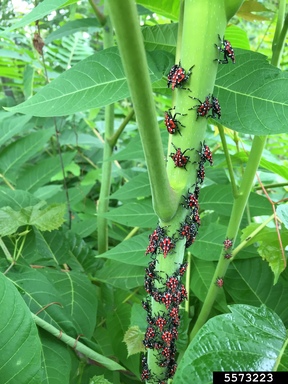 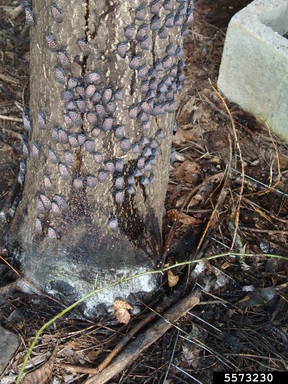 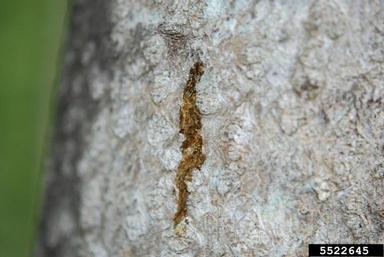 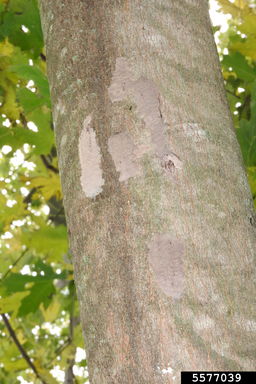 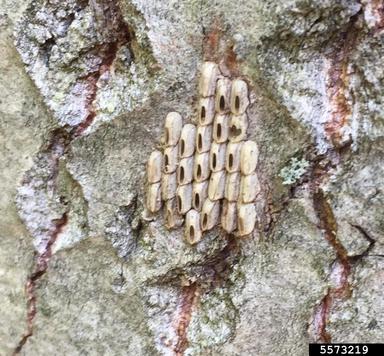 What to Do If You May Have Found SLF

First, and most important – if you think you may have found SLF, do not attempt to move any wood or other potentially infested material from the site. Instead, you can do one of two things: